A new book by Anja Grebe celebrates the stunning art collection of the Vatican by featuring every Old Master painting on display. "The Vatican: All The Paintings" also includes images of sculptures, maps, and tapestries which span centuries of artistic genius.

If geography is destiny, it is only appropriate that the Vatican Museums hold one of the world’s greatest art collections. Home to masterpieces by Leonardo da Vinci, Michelangelo, Raphael, and Titian, the Vatican has always been a place sacred to the arts. The poetic and creative impulses of the hill beside the Tiber are revealed in its name: The ancient Romans called this modest eminence the Mons Vaticanus, a reference to the poets and seers, or vates, who dwelled there. For many centuries, popes, cardinals, and the religious orders were responsible for the realization of dozens of masterpieces. So many of the treasures in the collections of the Vatican Museums—gorgeously reproduced in Black Dog & Leventhal’s The Vatican: All the Paintings and clearly described by Anja Grebe—depict a vibrant and vivid view into a world of beauty and faith. Walking through the Vatican, or turning the pages of the book, we get an incomparable lesson in the history of art and a profound impression of the skill and passion of the artists, and of their wonderful “force of mind.”

— Introduction by Ross King, author of Brunelleschi’s Dome and Michelangelo and the Pope’s Ceiling

Take a look inside with these gorgeous images: 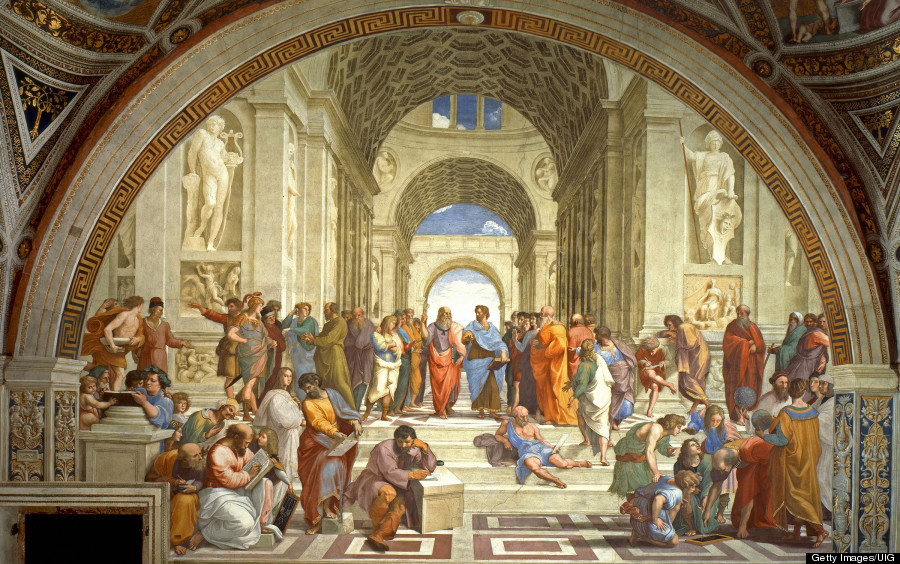 One of the most famous paintings in the Raphael Rooms is the School of Athens representing philosophy and science, disciplines in which Raphael includes painting and architecture. It is in part an homage to some of the most important artists and scholars active at the papal court at the beginning of the sixteenth century, most importantly the architect Bramante, to whom Raphael owed his recommendation to Julius II. This painting, whose sophisticated perspective opens up a deep vista in the small room, represents an idealized gathering of scholars and artists from the classical world, the Middle Ages, and the Renaissance, and constitutes one of Raphael’s greatest achievements. 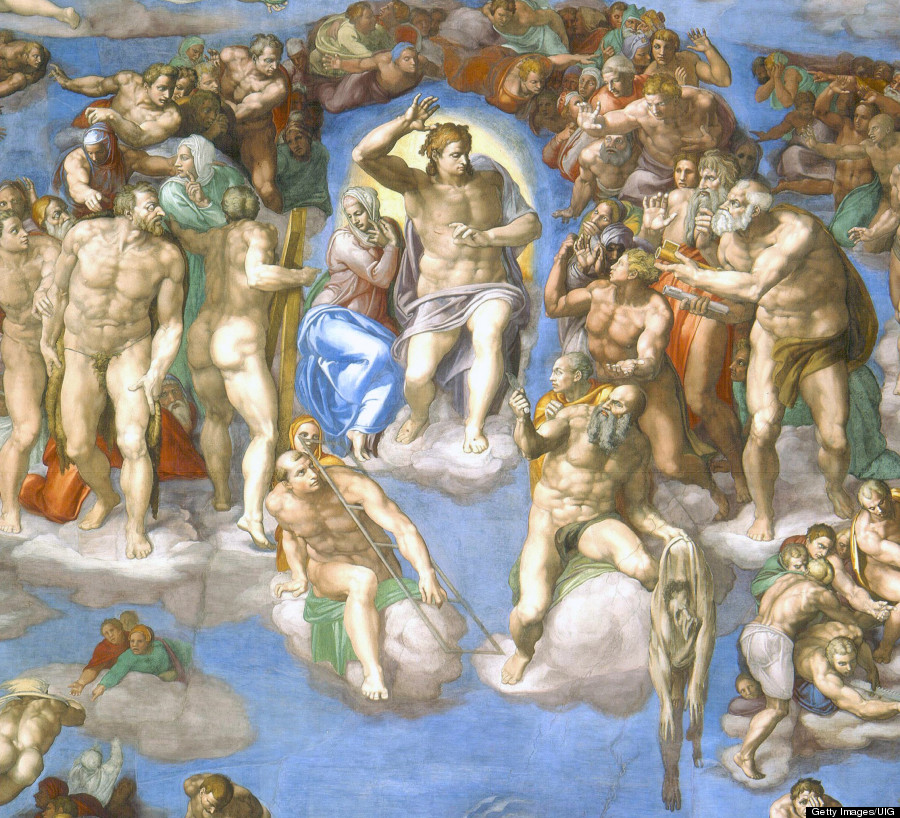 Michelangelo’s enormous painting unites some 390 persons around the central Christ figure, and almost all are naked. The work depicts the resurrection of the dead and their separation into the saved and the damned. While the saved souls ascend to heaven on Christ’s right-hand side, the side of the “just,” the damned descend to hell on his left. The nude figures, particularly the saints, offended many of Michelangelo’s contemporaries. The stern theologians at the Council of Trent denounced the fresco and commissioned painter Daniele da Volterra to paint vestments and fig leaves over some of the naked figures in 1565, a year after Michelangelo died. These alterations were reversed during the chapel’s restoration. 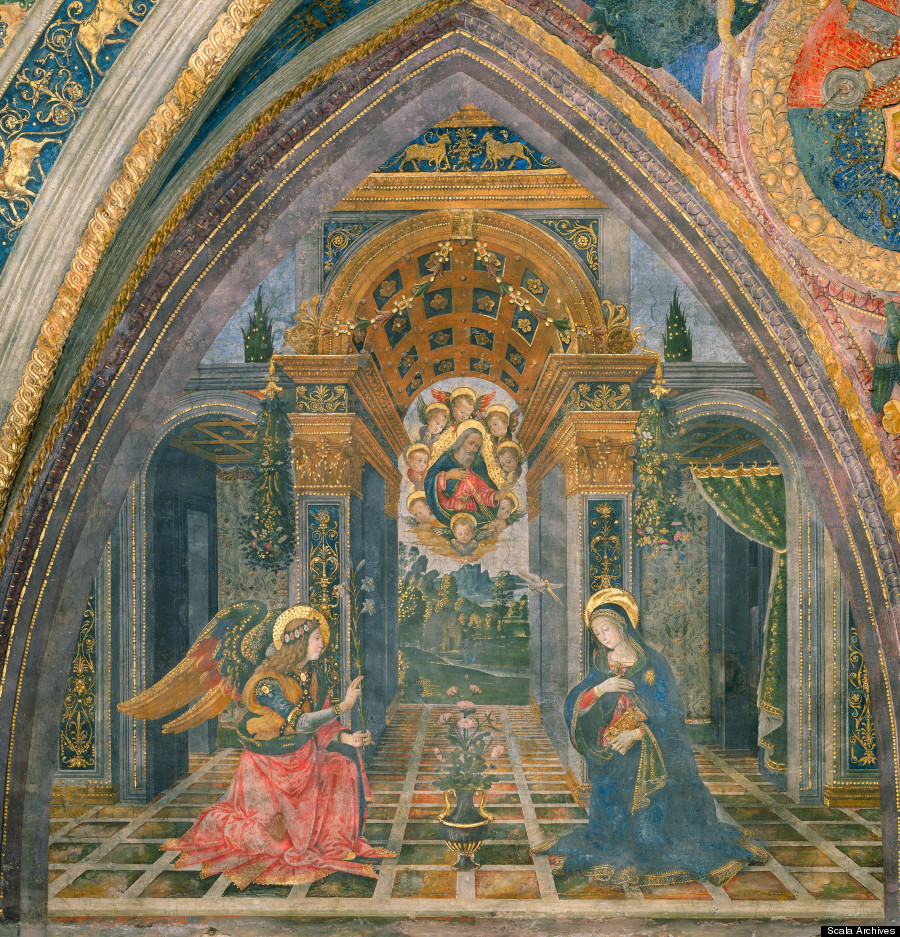 The first room Borgia Apartments, the Room of the Mysteries of Faith, is decorated with scenes from the life of the Virgin Mary. The Annunciation of the Birth of Christ is the first in the sequence. Pinturicchio has painted the event, which according to the Gospel of St. Luke occurred in Mary’s house, in a palatial Renaissance-style interior closed off at the back by an architectural element resembling a triumphal arch. The Annunciation itself takes place in the foreground of this rigorously symmetrical fresco. Mary, wearing a blue mantle, kneels on the right and offers a humble gesture of greeting to the angel, who approaches her from the left holding a lily. 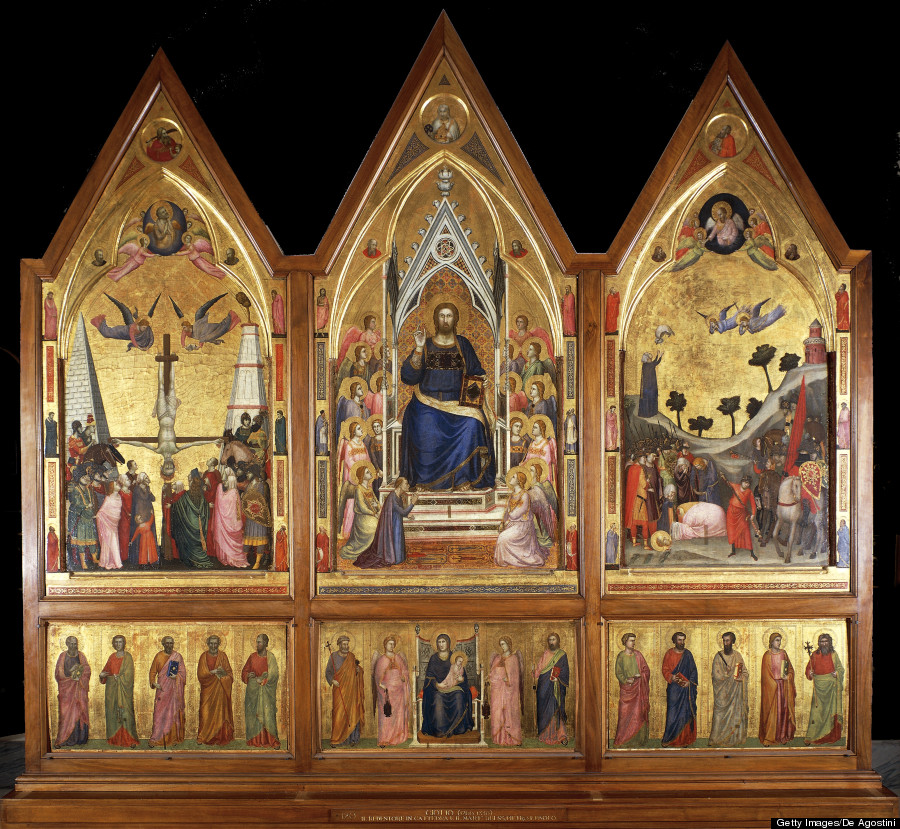 The Stefaneschi Polyptych is one of the oldest works in the Pinacoteca. It is closely tied to the history of the Vatican. The Florentine painter Giotto di Bondone completed this richly gilded double-sided work between 1320 and 1330 for the high altar of Old St. Peter’s. The polyptych was commissioned by Cardinal Jacopo Caetani Stefaneschi (ca. 1270–1343), whom Giotto portrays at the feet of St. Peter’s throne holding a detailed model of the altar on which the donor himself can be seen. This likeness is regarded as one of the first realistic portraits in the history of painting. 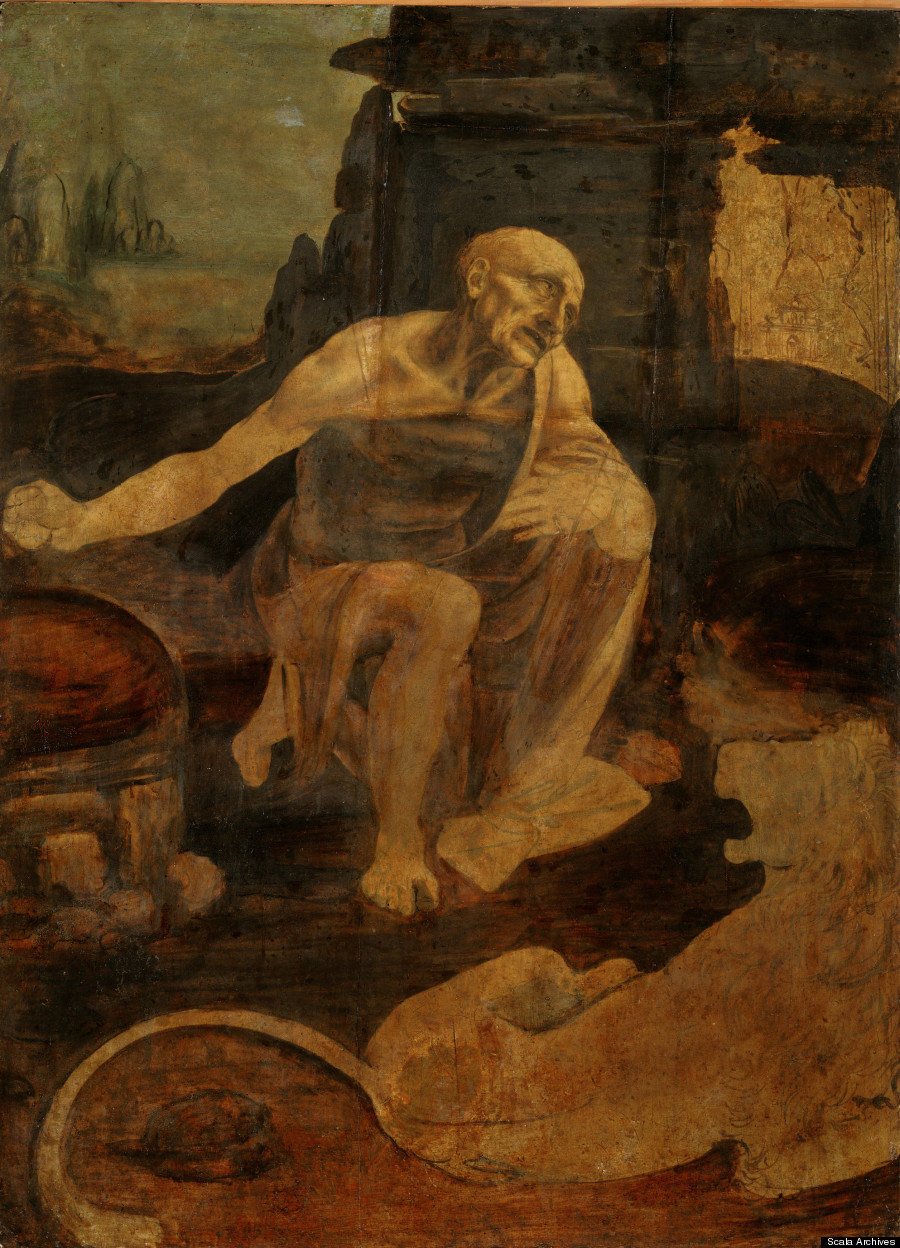 This panel of St. Jerome is one of Leonardo da Vinci’s more enigmatic works. It was painted around 1482, the year Leonardo moved from Florence to the ducal court in Milan. It is not known why the highly innovative picture was never finished. It may be that the work failed to meet with the approval of a possible patron or that Leonardo’s own perfectionism led him to abandon it. From a contemporary point of view, the work is fascinating precisely because of its sketch-like state, as this affords an insight into Leonardo’s painting method. The work was only identified in the early nineteenth century—by the painter Angelica Kaufmann—as the work of Leonardo. It was acquired by Pius IX for the Pinacoteca Vaticana in 1856. 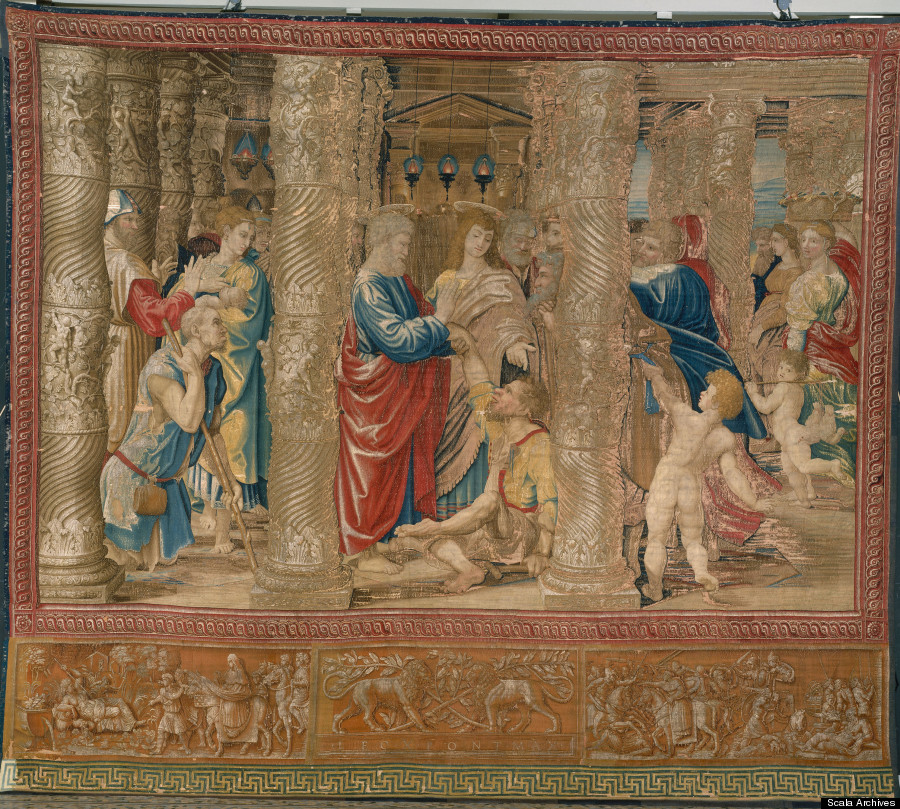 The healing of the lame man was St. Peter’s first miracle as an apostle. According to the Acts of the Apostles, St. Peter healed a crippled beggar by the door of the Temple with the simple words: “In the name of Jesus Christ of Nazareth, rise up and walk!” (Acts 3:6). Raphael sets the scene beneath the mighty twisted columns of Solomon’s Temple in Jerusalem, whose form and decoration Pieter van Aelst has skillfully translated into tapestry. In the center column we see the act of healing taking place, with apostles St. Peter and St. John and the lame man. Raphael has chosen to depict the moment when St. Peter takes the beggar, who is sitting on the floor, by the hand and thereby effects the miracle. 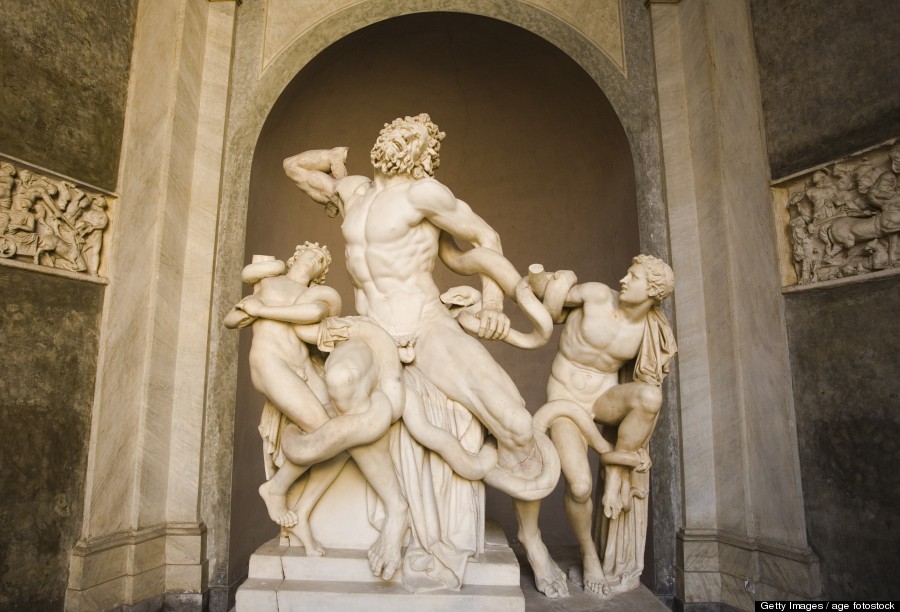 In early 1506 a large marble sculptural group was discovered in the Esquiline vineyards. In his Natural History, the classical author Pliny the Elder (ca. 23–79 AD) describes the Laocoön as a work that is “to be preferred to all other works of painting and sculpture.” This sculptural group, acquired by Julius II in 1506, was one of the earliest works to be exhibited in the Cortile Ottagono and it remains among the most famous of all antique sculptures. Thought to have been made after a Greek bronze original, the group depicts the gruesome death of the Trojan priest Laocoön after warning his fellow citizens of the deception involving the Trojan Horse. Artists such as Michelangelo admired the realistic depiction of the play of muscles, shown here at the point of their greatest exertion, and the convincing facial expressions and gestures of figures in the throes of death. 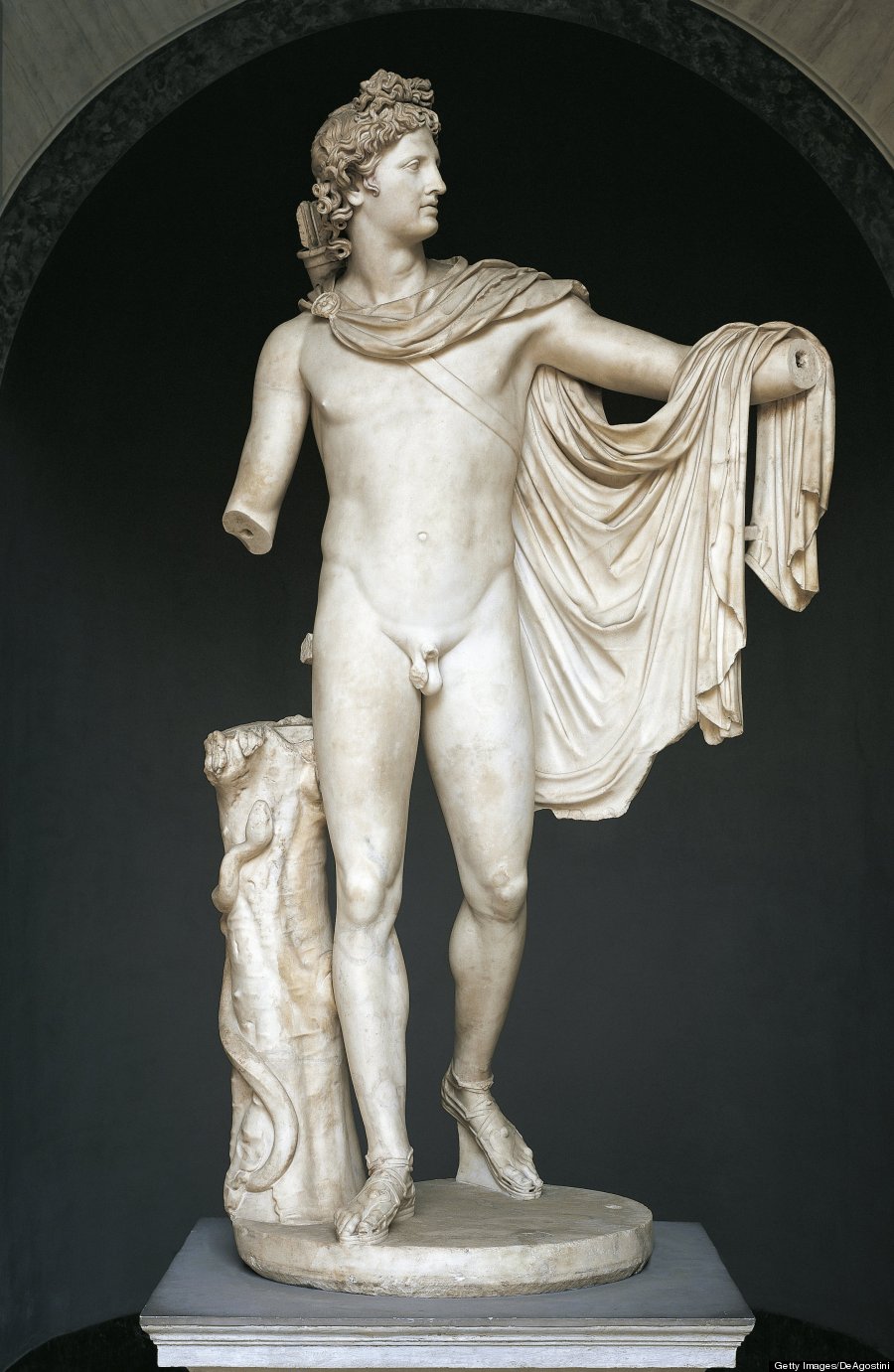 The Apollo Belvedere is perhaps the most famous statue in the Vatican Museums and one of the best-known sculptures in the history of art. This figure of the antique god of the Muses and of war was discovered virtually undamaged at the end of the fifteenth century and put on display by Julius II in the Belvedere courtyard by 1508 at the latest. The larger-than-life-size statue depicts Apollo not as the art loving god of the Muses holding a lyre, but instead in a more martial pose. Disseminated in numerous reproductions, the sculpture has been regarded as the epitome of classical beauty ever since it was put on display in the Cortile Ottagono. 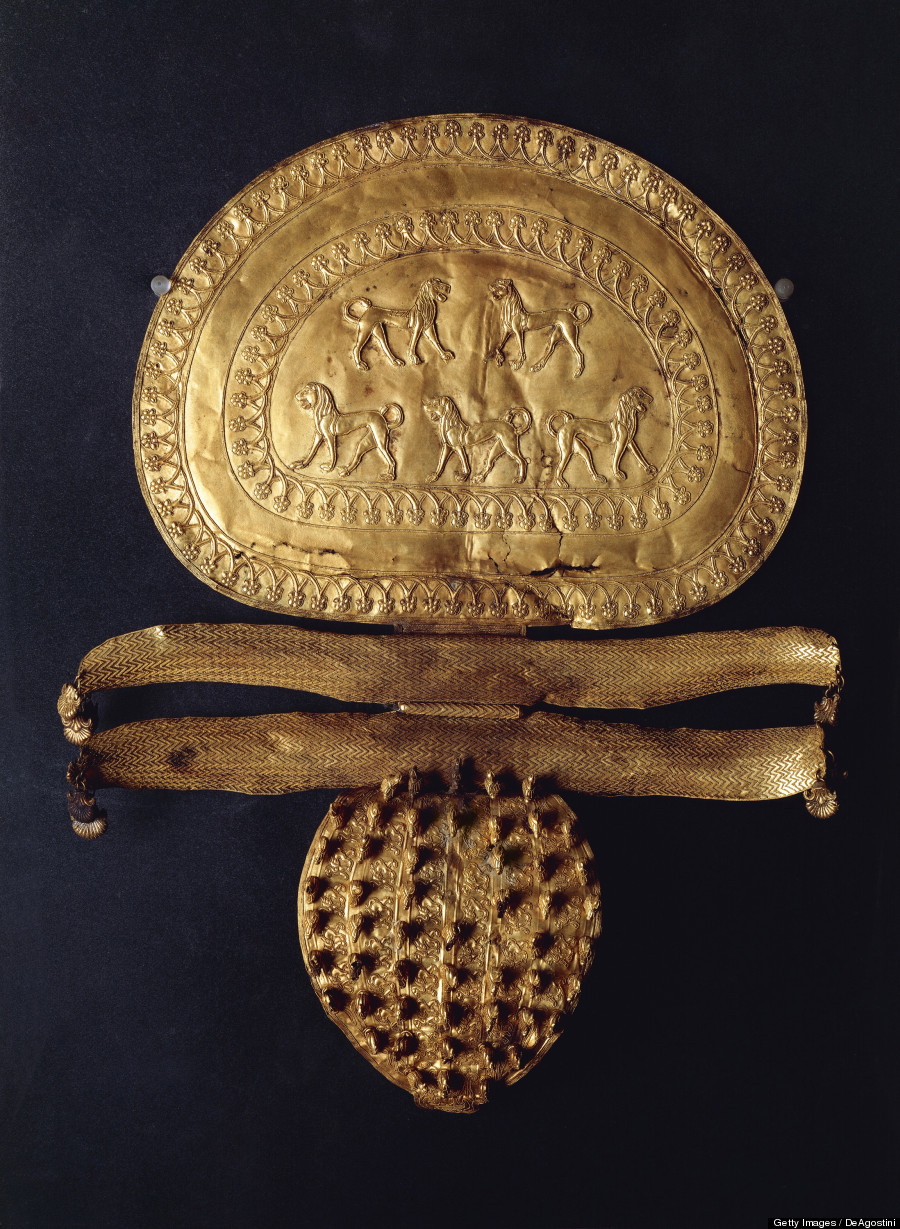 This large solid-gold fibula, used to fasten its owner’s robes at the shoulder, is one of the most precious objects in the Gregorian Etruscan Museum. It was found in the socalled Regolini-Galassi tomb in a previously undisturbed necropolis at Cerveteri in 1836. Together with other richly decorated gold items that also found their way into the Vatican, the clasp formed part of the ceremonial dress of the deceased, who must have been a member of the highest aristocracy or even the royal family. 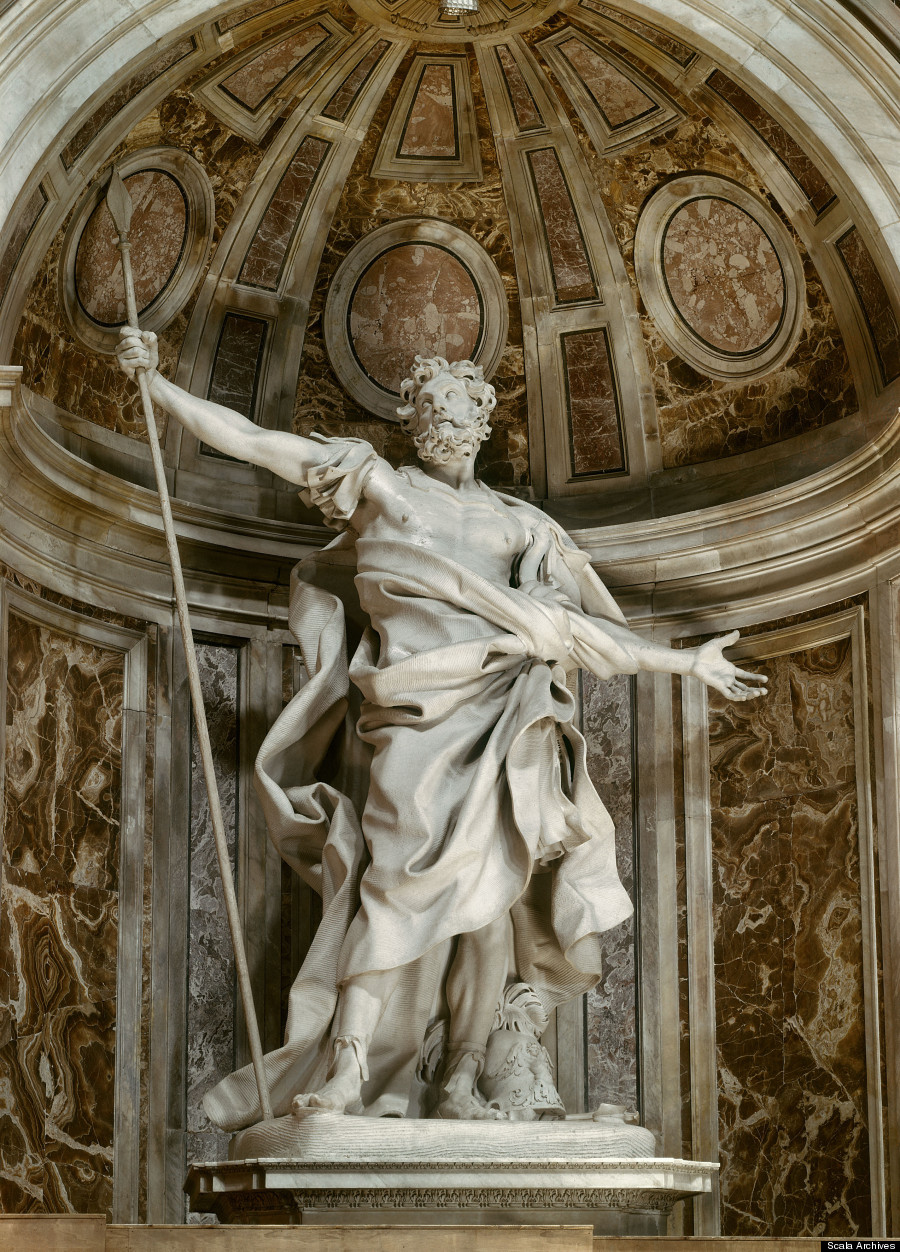 According to Christian legend, St. Longinus was the soldier who pierced the side of Christ on the cross with his spear (John 19:34). He is also identified with the Roman captain described in the Gospel of St. Mark as having acknowledged Christ’s divinity after seeing him die: “Truly this man was the son of God!” (Mark 15:39). Longinus was the subject of great veneration as the first pagan convert in the Catholic Church. Bernini sculpted the colossal statue of the saint, one of his most famous creations, for the Longinus pier between 1628 and 1638. St. Longinus stands in a contrapposto stance with widespread arms, symbolizing his readiness to embrace the Christian faith. The emotion and excitement of the saint at the moment of recognizing God is revealed through his ecstatic, upward gaze and the agitated folds of his mantle, which are also examples of Bernini’s mastery. 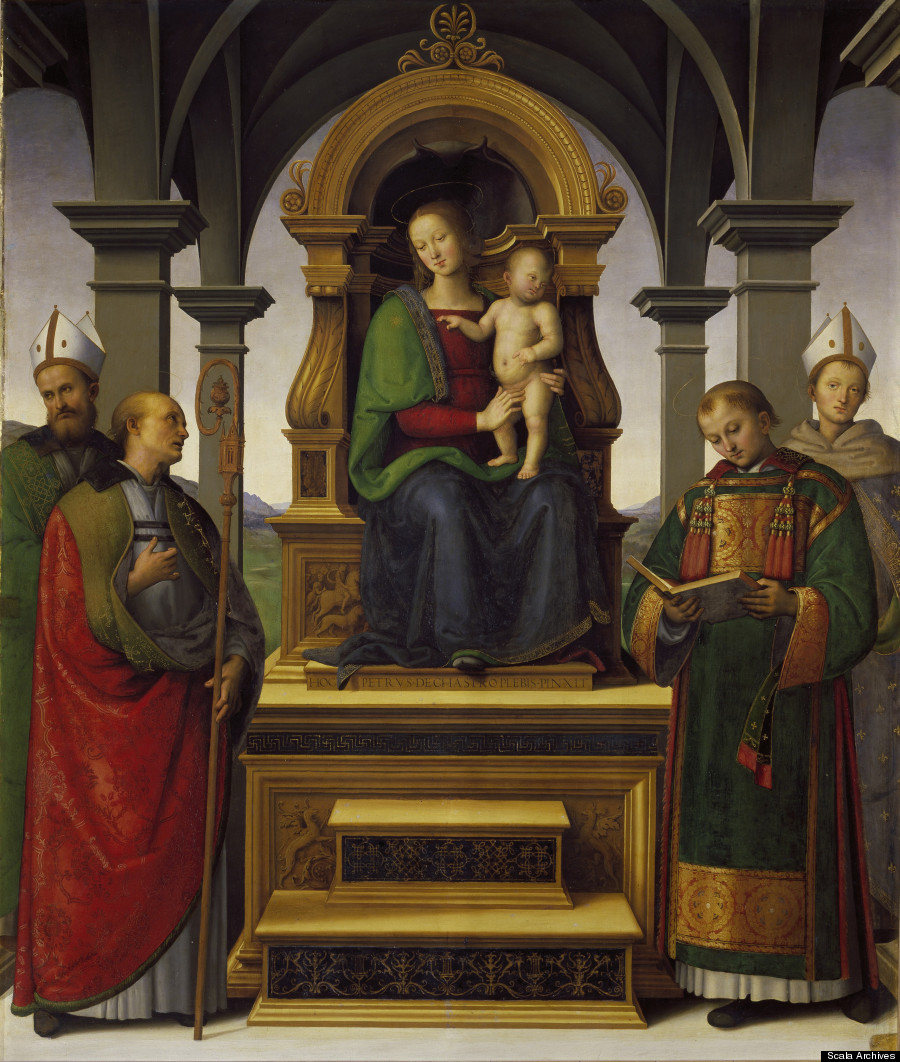 The “Madonna and Child with Saints” is one of Pietro Perugino’s most beautiful paintings. Especially stunning is the virtuoso rendering of the sumptuous fabrics. Each figure is given an individual, almost portrait-like expression. The artist proudly signed his masterpiece on the footrest underneath the Madonna.

Captions courtesy of "The Vatican: All The Paintings," by Anja Grebe.