VATICAN CITY (RNS) High-level debates over Catholic teachings on marriage and divorce and other hot-button issues heated up on Wednesday (Feb. 19) as a highly anticipated effort to overhaul the Vatican bureaucracy slogged through the devilish details of financial reform.

The multitrack talks launched months ago by Pope Francis ramped up this week as some 185 cardinals converged on Rome to watch the pontiff add 19 new members to their select ranks this weekend, part of what some called “the most critical week” of Francis’ year-old papacy.

Anticipation is mounting for a series of closed-door discussions on Thursday and Friday, when the cardinals will hold what are expected to be frank talks about issues such as contraception, cohabitation, gay marriage and whether divorced and remarried Catholics can receive Communion.

That may be an understatement.

Francis wanted the entire College of Cardinals to have a chance to talk about the controversial themes, which are to be discussed at greater length this fall at a landmark Vatican meeting of many of the world’s bishops.

But Francis also asked the hierarchy in each nation to provide feedback ahead of time about the attitude of their flocks; the blunt responses so far have already made public the sort of views that many church leaders would prefer to ignore or only speak about privately.

“There is a big gap between the Vatican and reality,” the Japanese bishops wrote in a frank assessment, published on Wednesday, of the views of their flock on contraception and related topics.

And the church is not helping matters, they added: “Often when Church leaders cannot present convincing reasons for what they say, they call it ‘natural law’ and demand obedience on their say-so,” the bishops wrote.

Bishops in other countries have found similar results when they surveyed the faithful. They have stirred debate not only by publishing the results but by calling for — as German and Swiss bishops did — “a new approach concerning Catholic sexual morality.”

The bishops of England and Wales were among the first to survey the pews but recently decided to keep the results secret, prompting sharp questions from some in the church. “It is somewhat bizarre to consult the faithful on matters of doctrine and then not to tell them what the consultation amounted to,” wrote the editors of The Tablet, a leading Catholic periodical.

In the U.S., some bishops have decided to poll their dioceses, but many have not, and it is not clear what information the American bishops will send to Rome about the attitudes of American Catholics.

In another twist to the intrigue over whether or how much Francis will open the door to change, he invited German Cardinal Walter Kasper to deliver a lengthy opening address to the assembled cardinals on Thursday morning.

Kasper is a favorite theologian of Pope Francis, and he is well-known for encouraging Catholics who are divorced and remarried (without an annulment from the church) to take Communion, something that is currently barred.

Kasper was also a frequent sparring partner of another, more conservative German theologian, Cardinal Joseph Ratzinger, before Ratzinger was elected Pope Benedict XVI. Kasper recently published a book on mercy, a favorite theme of Francis, and choosing him to set the stage for these closed-door talks could indicate how much things are shifting in the Vatican.

What may not be changing as quickly, however, is the overhaul of the Roman Curia, the papal bureaucracy.

Francis was elected last year with a mandate to overhaul the centuries-old, dysfunctional Vatican civil service. He quickly appointed an unprecedented “kitchen cabinet” of eight cardinals to lead to effort. The cardinals wrapped up three days of meetings on Wednesday, their third over the past year, but there were still no announcements of any concrete plans.

The Council of Cardinals, dubbed the G8 or “Gang of Eight,” instead spent most of the time discussing problems with the Vatican’s financial system and the scandal-plagued Vatican Bank, and they submitted some initial proposals to the pope, the Vatican said Wednesday.

Those proposals and any response from the pope will remain secret for now, said the Vatican’s top spokesman, the Rev. Federico Lombardi.

Lombardi also confirmed that the Council of Cardinals had scheduled a meeting for late April, in addition to the one set for July, in an apparent effort to push ahead with changes to the rest of the unwieldy Vatican bureaucracy before the momentum stalls.

Part of the problem, said longtime Vatican journalist John Thavis, is that there is so much to do and Francis has appointed so many groups to do it that “the Vatican is experiencing a virtual gridlock of commissions, councils and consistories.” In addition, the Vatican has hired several outside consulting groups to provide feedback on fixing the systems.

“If I had to predict,” Thavis wrote on his blog, “I’d say that the framework for reforming the Vatican’s economic affairs and in particular the Vatican bank will come first, and changes in Roman Curia offices will take shape much later.”

Francis “has started reforming the Curia but this is a process that will take some time and the reforms will need to be carefully examined,” Italian Cardinal Giovanni Battista Re, a longtime curial official, told the Vatican Insider website.

But, Re said, “Francis is a determined reformer.”

Vatican Reforms Heat Up As Cardinals Gather In Rome To Debate Finance, Marriage, Divorce, In The Catholic Church
Pope Francis Meets With Cardinals 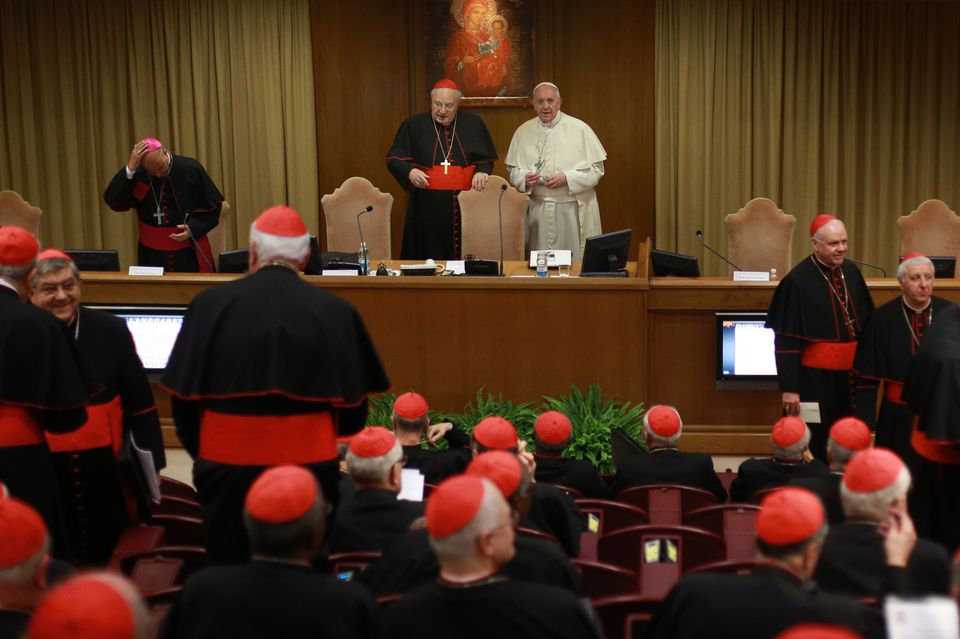