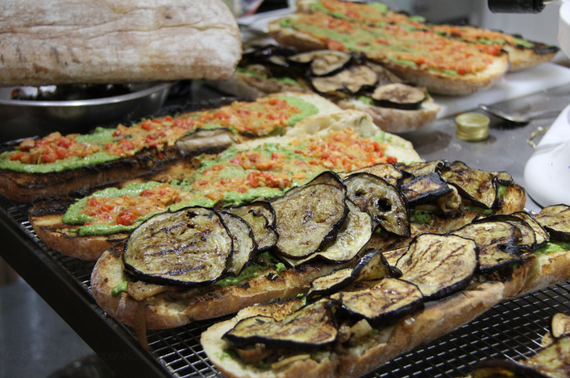 A planet that desperately needs all of us to go vegan, the torture and suffering of animals who want their lives as much as we want ours, and contests with prizes such as your weight in chocolate: The reasons to try a vegan diet during November, World Vegan Month, range from the ethically compelling to the downright silly. If you're concerned about your health, consider the food for thought below, and log on to Catskill Animal Sanctuary's website for recipes and inspiration!

1. Eating processed meat increases the risk of death from heart disease by 72 percent.

2. Animal products contain cholesterol, which can lead to heart disease, America's leading killer, whereas a vegan diet is cholesterol-free!

3. Men who eat 2.5 eggs or more a week have an 81 percent greater chance of developing lethal prostate cancer than those who eat fewer than .5 eggs a week.

4. People who regularly eat processed or red meat are up to 50 percent more likely to develop colon cancer, the second most common cancer worldwide, than individuals who avoid these foods altogether.

7. Hey Dairy Council: Cow's milk does not "do a body good." In fact, it can leech calcium from your bones.

8. About 60 percent of adults can't digest milk... and humans are the only animals to drink another animal's milk and to drink milk as adults! Hmmm... gotcha thinkin'?

9. Kale contains more calcium per calorie than milk -- 90 grams per serving -- and is better absorbed. Try this great kale salad!

10. Vegans have lower rates of obesity and weigh 5 to 20 pounds less than meat eaters.

11. One in three American children is overweight or obese. A vegan diet, high in fiber, low in fat, cholesterol free, and rich with vitamins and minerals, is an excellent choice for healthy children.

12. A vegan diet has been shown to help treat Type 2 diabetes for many diagnosed with the disease.

13. Our daily protein requirement can easily be met with high protein legumes, nuts, seeds, grains and even leafy vegetables. Consider that many of our top athletes, among them tennis champion Serena Williams, the world's strongest man Patrik Baboumian, MMA fighter Mac Danzig, triathlete Brendan Brazier, and NFL fullback Tony Fiametta are clearly getting all the protein they need!

14. A study led by Dean Ornish, M.D., showed telomeres, DNA-protein complexes that are markers of health and longevity, were elongated among men who adopted a low-fat, plant-based diet. Longer, healthier life, anyone?

15. Omega-3 fatty acids like fish oil are good for you, but are plentiful in plant sources such as hemp seeds, flax seeds, and seaweeds.

16. Worried about B-12 in a vegan diet? Adding fortified foods like breakfast cereals, non-dairy milk, and nutritional yeast make it easy to get the recommended daily intake. Most multivitamins also contain ample B-12.

17. Go vegan for a healthy mind as well! Vegans have lower incidences of anxiety and depression than meat eaters.

18. There is a strong correlation between Alzheimer's disease and the consumption of meat and dairy.

As if the above aren't enough compelling reasons to join the growing ranks of vegans, there's the terrifying and the downright gross:

19. Antibiotics used on factory farmed animals are creating life threatening "superbugs." About 80 percent of U.S. antibiotics are used to keep farmed animals alive in crowded filthy conditions. Bacteria are evolving to resist these antibiotics, leading to new antibiotic-resistant infections. The Centers for Disease Control (CDC) estimates that 2 million people get sick and at least 23,000 die as a result.

20. Pig poop, anyone? The USDA is piloting a program at pig slaughterhouses that speeds up kill lines by 20 percent while halving the number of inspectors. The result? Whole chunks of feces made it to the end of the processing line before being caught by inspectors.

The USDA, Big Ag, powerful lobbies like The Dairy Council and their friends in Congress have duped the American public for decades. Milk does not "do a body good," nor should beef be "what's for dinner." The consumption of animal products is making us sick and fat, causing cataclysmic environmental problems, and subjecting 150 billion individual beings every single year to terror, torture, and suffering. Please... for them, for yourself, and for the only planet we have, I urge you to try veganism during World Vegan Month. Help is just a few keystrokes away. Just google "vegan resources," "veganism," or "vegan recipes." Or simply get started with Compassionate Cuisine -- your body, and your taste buds, will thank you!