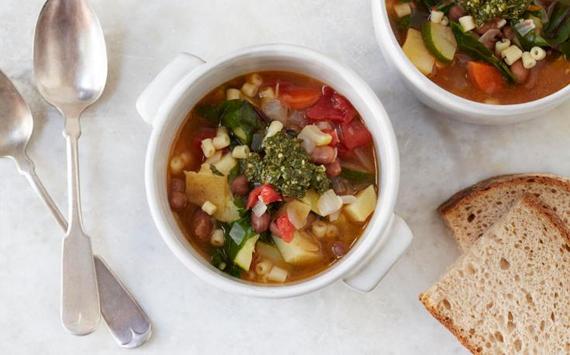 Drop your life in New York City, move to California, join a start-up. It sounds hackneyed, sure. But it's worked for plenty of other folks (the fortunate 5 percenters, that is), so why not the food writer Mark Bittman?

In September, Bittman said he was leaving his longtime perch as a New York Times columnist "to take a central role in a year-old food company," as he coyly put it. This month, foodies learned what exactly that meant when Bittman announced he's joining the team at The Purple Carrot, which delivers semi-prepared, "perfectly proportioned" meal kits that, as the company says, "make it easy to cook flavorful vegan meals at home."

But before all of the hoopla (see here, here and here), Bittman and crew had to get the recipes right.

So it was that during the first week of August, The Purple Carrot's incoming chief innovation officer was holed up in a Berkeley bungalow jamming through test recipes with an eight-person team. The place seemed ripped out of a Bay Area set design--a craftsman affair, with weathered shingles and Japanese maple out front--and when a visitor arrived, Bittman opened the door with a videographer following close behind him. The house was something of a mess. Plates and platters crowded the foyer, which had been turned into a prop room for the food stylist. The dining room had been converted into a pantry, and the table was piled high with bags of flour, boxes of dried pasta, spices, and salt.

Naturally, all of the action was in the kitchen.

The Purple Carrot's founder, Andy Levitt, was leaning in a doorway, talking to a potential investor. Levitt is wiry and tanned, with a peak of silver hair, and he has that combination of intensity and serene glow that is the signature of a health nut. (Like Bittman, Levitt says he mostly eats plants, but he's not a doctrinaire vegan, and he seems to view vegetarianism as more of a dietary virtue than as an ethical imperative.) The visitor, caught unawares by the maelstrom of activity ("I think you'll find it interesting," is all Bittman had offered by way of invitation), asked Levitt to explain what The Purple Carrot is all about.

No doubt pleased to have his pitch teed up in front of the venture capitalist, Levitt launched into his elevator spiel. The Purple Carrot shipped 100,000 meals in its first year in business, he said, mostly in the Northeast and Mid-Atlantic. Bringing Bittman on board would help the company to expand, especially on the West Coast, by, among other things, building a second food-prep facility in California. (The pitch must have worked; the same day that the company announced Bittman's involvement, it opened a food-prep site in the L.A. area.)

What makes The Purple Carrot different from other meals-at-home kits like Blue Apron, Levitt said, is that his company, which he launched in October 2014, is dedicated to plant-based menus. "A lot of people think vegan cooking is intimidating, and they might not have the confidence to do it well," Levitt said. "We're trying to make it simple. We're trying to make it possible for people to eat plant-based a few nights a week. We're helping people to see the connection between a healthy and humane diet and the benefits of that."

But don't the home delivery meal kits, with all of their packaging and the fuel used in the delivery, also come with a sizeable environmental footprint? Not necessarily, Levitt countered. "Think about food waste," he said. "Our meals are proportioned so that there's no waste. Most people don't need a whole bottle of fish sauce in their fridge if they're just cooking Thai food once or twice a year. Our ingredients are perfectly measured so that nothing is wasted."

Bittman, meanwhile, was hunched over a cutting board, trying to recreate a dish he had recently enjoyed at a New York restaurant called Dirty French. It was a mushroom torte of sorts, the mushrooms layered with liberal amounts of butter, then baked, set aside, and served sliced and cold, almost pate-like. Bittman wanted to figure it out so he could later engineer a vegan version. A cooking assistant was shaving large king oyster mushrooms down a mandolin, and asked about her technique. "You're not doing it wrong," said Bittman, whose New York-born charm is of the lovably dyspeptic uncle variety.

A woman working in the corner seemed to be running the show. Kerri Conan has been Bittman's go-to kitchen collaborator for 11 years, helping him to test recipes for his many bestselling cookbooks. She's got a house in Lawrence, Kansas (about as far as you can get from the rarefied precincts of Brooklyn and Berkeley), where she lives with her husband and two dogs and tends a potted herb garden on a tech cart that she wheels around the yard. "That way, you can follow the sun," she said.

Now, she was trying to nail a vegan penne with "creamed" cauliflower, Brussel sprouts, and breadcrumbs. Bittman and Conan had substituted Japanese panko for European-style breadcrumbs, giving the dish a nice crunch to offset the deliberate mushiness of the well-cooked veggies. The pasta had a peppery kick ("Mark loves black pepper," Conan said). But they were worried that the Brussel sprouts made it taste a little too bitter. "Can we add some anchovies?" Bittman said drily. Conan rolled her eyes, went back to tweaking the dish.

Asked how he felt about his impending transition from newspaper columnist to startup CIO, Bittman said he was having a blast. "It's a lot of fun," he said. "It's all consuming, you know."

The afternoon was waning. The kitchen crew began to clean up. They were going to have a wrap party that night at Rintaro, a new izakaya restaurant in San Francisco that is all the rage among the Bay Area culinascenti. There was a lot of chatter about who was going to drive and who would go with whom. "Does anyone know where the house key is?" someone shouted to the room. No one answered. It had been a long week.

"Well, Andy and I can't go until this mushroom thing is done baking," Bittman said as he slumped onto a stool. He sniffed at his t-shirt, which had a picture of the galaxy, a large arrow pointing to a random star, and the line, You Are Here. "Ugh. I can still smell the mushrooms all over myself. It's disgusting. I gotta take a shower."

He turned to the visitor and said: "This is one of those times when, by the end of the day, I'm just sick of cooking."

Well, there's a vegan meal-kit delivery service that can help him with that.

Official magazine of the Sierra Club