Vegans: occasionally self-righteous but well-meaning advocates of good health and animal welfare, or traitors to the Motherland? And why would post-Soviet nationalists see seitan as a path to Satan?

Granted, these are not questions that are likely to concern most of us. With Donald Trump just a step away from wrapping his stubby little fingers around the nuclear football, it's hard to work up enthusiasm for a far-off beef about the politics of beef. 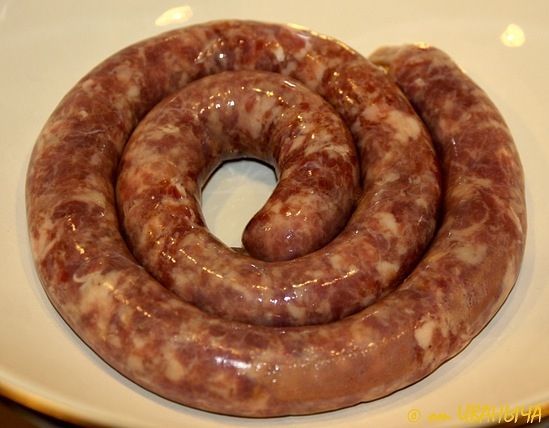 But the News of the Weird gods granted us a gift this morning, in a headline from The Guardian: "Georgian vegan cafe attacked by 'sausage-wielding nationalists.'" According to The Guardian and RFE/RL, "far-right extremists" wearing sausages around their necks attacked the vegan Kiwi Cafe in Tbilisi on Monday, throwing grilled meat at the customers.

The story quickly made the rounds on Facebook (or at least among my circle of friends, which is basically Russianists plus the target audience for Portlandia). The crunchier elements of my FB circle were dumbfounded: how could this possibly be happening? But my post-Soviet friends just nodded and sighed.

In the West, we're used to dietary choices being political only in the sense that "the personal is political"--our decisions have meaning, though not in the context of national identity or Great Power conflicts. But we should recall that vegetarianism (and, more recently, veganism) became mainstream in America and Western Europe at a time when it was all but unthinkable further east: the Soviet bloc discouraged anything that looked like a subculture, and Leninist cuisine was closer to Upton Sinclair's The Jungle than to Diet for a Small Planet.

When I spent my first semester in the Soviet Union in late 1986, my vegetarianism was a mixed blessing. On the one hand, I was spared the mystery meats that made up most of our meals when we weren't guests at private homes--in the cafeteria, we used to amuse ourselves by looking at the gray slabs on our plates and playing multiple rounds of "Name that Organ" ("I thought brains were supposed to be pink..."). On the other hand, I had to field endless queries about my odd lifestyle. The two most common questions--did I not drink alcohol, and did I do yoga--pointed back to the only context that made local sense: Tolstoy's vegetarianism as part of a general practice of asceticism.

My standard response ("Do I look like someone who's into self-denial?") only got me so far. More to the point, in many of the northern regions of the Soviet Union, fresh vegetables out of season were an expensive luxury. Demanding them would have been an act of thoroughly obnoxious privilege.

The Kiwi Cafe incident starts to make sense when you look at the details. The year-old cafe is a popular meeting-place for foreigners, showing "episodes of the animated sci-fi sitcom Rick and Morty." A month earlier, the nationalist sausage cultists had come to the neighborhood and asked if members of the LGBT community every visit the Cafe. And, in response to the attic the Kiwi Cafe has resolved to remain "ready to accept all customers regardless of their nationality, race, appearance, age, gender, sexual orientation, or religious views."

This statement, which will likely strike American readers as inoffensive boilerplate, is a slap in the face to blood-and-soil nationalists. It also reveals what the problem is with veganism: in the post-Soviet world, it's all of a piece with the entire spectrum of pluralism that they find so objectionable.

Again, this is probably mystifying to most Americans, but that is because Americans, regardless of actual religious background, are the product of a Protestant worldview, in which personal salvation is precisely that: personal. For the sausage-wielding nationalists, personal choice and self-expression are an intolerable disruption. For the Truth to be the Truth, it has to hold for everyone.

So, vegans and vegetarians of the world, unite! Or don't. It's really your own business.