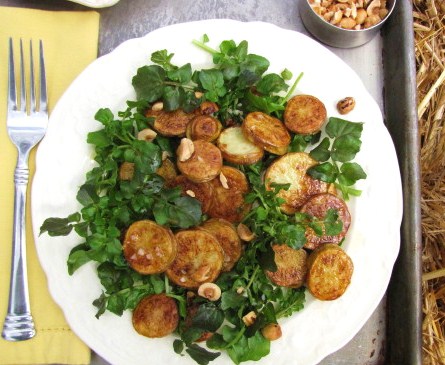 I've been thinking a lot about simplicity lately. The simpler my life gets, the happier I am. I've had to bang my head around a good deal to get this message through my thick skull, and it hasn't been pretty. But now that I've arrived safely in the land of Simple, I feel like I should pass on some tips. Especially cooking tips.

Sometimes I feel like a wretched vacuum cleaner salesman, the way I go on about how easy it is to cook vegetables, how delicious they are... how everyone should just cook more at home and we'd all be healthier! Skinnier! Happier! Just follow this recipe! Read my blog! Buy my book! It's easy, delicious, quick. For Pete's sake, who invented this character called a Food Writer?

What if we just stripped out all the hype and zeroed in on the practical stuff: What can I cook on a Tuesday night that everyone will like... that doesn't require a culinary diploma... and that doesn't involve an emergency run to the specialty grocer?

To answer that question, I thought it would be great to come up with a dozen suggestions that don't use any more than three or four ingredients (not including salt and some kind of cooking fat -- olive oil, usually). We're talking veggies here, since that is, honestly, my specialty -- no false advertising, I promise. I'll admit, I did adapt some of these ideas from a cookbook of mine, but it seemed like a good place to start. Here goes:

1. Sweet Potato Fries: Cut unpeeled sweet potatoes into short skinny sticks, toss thoroughly with olive oil and salt, spread in one layer on a lined baking sheet, roast at 450 degrees until lightly browned all over. Sprinkle with more salt and serve with a squeeze of lime and/or sour cream.

2. Sautéed Sugar Snap Peas and Salami. Cut a couple slices of deli salami into thin strips. Heat a little olive oil in a big nonstick skillet over medium-high heat. Add a few generous handfuls of sugar snap peas and cook, stirring constantly, just until they begin to blister and turn brown. Add the salami strips and continue cooking until the salami is mostly crisp and browned, another few minutes. Remove from heat and serve right away, tossed with fresh mint if you like.

3. Avocado, Bibb and Lime Salad. Cut a ripe (pitted and peeled) avocado into small chunks, toss with olive oil, lime juice, salt, and, if you like, some chopped tender fresh herbs (anything you've got on hand, like chives, mint, basil or cilantro). Pile into individual leaves of Bibb lettuce.

4. Stir-Fried Baby Bok Choy. Cut a couple little heads of baby bok choy lengthwise into quarters and wash well. Heat a few teaspoons of peanut oil or canola oil in a stir-fry pan, or wok over medium-high heat. Add one clove of thinly sliced garlic and the bok choy. Cook, stirring or flipping constantly (kitchen tongs are handy here) until the bok choy is well-browned and tender.

5. Grilled Asparagus with Lemon Butter. Heat a gas grill to medium-high. Toss trimmed asparagus spears with olive oil and salt to coat. Put directly on grill grates and cook 2 minutes per side, just until grill marks appear. Off the grill, drizzle the asparagus with a little melted butter mixed with 1/2 teaspoon freshly grated lemon zest.

6. Grilled Portobello & Arugula Salad. Remove stems from mushrooms, scrape out gills with a spoon, drizzle with olive oil and balsamic vinegar. Heat gas-grill to medium and cook mushroom caps, stem side up, until liquid pools in caps and the underside is well-browned. Flip and grill for a just a couple minutes more. Arrange arugula on plates. Slice mushroom caps and arrange over arugula. Drizzle with additional balsamic and olive oil (or your favorite salad dressing). A smattering of crumbled blue cheese or a few halved tiny tomatoes would be nice with this, too.

7. Roasted Fingerlings with Watercress. Slice fingerling potatoes cross-wise into 1/2-inch coins. Toss with olive oil and salt, spread in one layer on a baking sheet, and roast at 450 degrees for about 20 minutes, until lightly browned underneath and tender. Mound on a bed of watercress, make a quick dressing from lemon and olive oil (and a bit of Dijon if you like), and drizzle over all.

8. Caramelized Carrots with Fresh Ginger. In a skillet or sauté pan that has a lid, heat a little butter and olive oil together over medium heat. To the pan, add a half-pound of carrots, peeled and cut into short, thin sticks. Season with salt, cover and cook slowly, stirring often, until the carrots are golden and tender, about 12 to 15 minutes. Add a teaspoon of minced fresh ginger to the pan, along with a teaspoon of cold butter, and stir and cook for a few seconds until the ginger is fragrant and the butter is creamy. Serve with chopped fresh mint or cilantro, if you like.

9. Tomato and Peach Salad. Cut small cherry tomatoes in half or beefsteak tomatoes into 1-inch chunks and put in a mixing bowl. Add one or two peaches, peeled and cut into small chunks. Toss with a little bit of orange juice, sherry vinegar, and olive oil. Add slivered red onions and torn basil or mint leaves, if you like. Serve right away.

10. Crunchy Limey Slaw. Toss about 2 cups shredded Savoy cabbage with a few teaspoons of fresh lime juice, a couple teaspoons of sugar, and a half-teaspoon of salt. Add chopped fresh cilantro and sliced scallions, if you like. Let sit and toss occasionally until just barely wilted, about 20 minutes.

11. Toasted Fresh Corn with Scallion Cream. Cut the kernels off of three or four ears of corn. Heat a little butter and olive oil in a large skillet over medium heat and add the corn and a little salt. Cook, stirring frequently, until the corn is just lightly browned (or "toasted"). (Any more and it will start popping out of the pan.) Add a tablespoon or two of very thinly sliced scallions and cook until slightly softened. Add a tablespoon of cream and lots of fresh pepper, stir and remove from pan.

12. Roasted Broccoli with Dipping Sauce. Cut two small crowns of broccoli into small florets and toss with olive oil and salt. Spread in one layer on a lined sheet pan and roast for 12 to 15 minutes at 450 degrees -- just until crisp around the edges and brown on the bottom. Make a quick dipping sauce of soy sauce, brown sugar and chopped fresh ginger. (A bit of lemon or lime juice and sliced scallions are optional). Eat the florets with your fingers, dipped in the sauce.

Susie Middleton
Author, 'Fresh From the Farm: A Year of Recipes and Stories"

Fresh from the Farm: A Year of Recipes and Stories
by Susie Middleton

The Fresh & Green Table: Delicious Ideas for Bringing Vegetables into Every Meal
by Susie Middleton