Last year was pretty rough for Donya Pierce and her family. The 26-year-old mother of two was homeless for a time and was staying with her kids in an emergency shelter for women and children.

But as of last week, things were generally looking up for Pierce. She was working with pro bono lawyers to take care of her traffic tickets. She has a job, though it pays her less than $1,000 a month after taxes, and her family is still on food stamps.

Then she decided to stop by Walgreens sometime after midnight on Thursday. As she was about to drive out of the store parking lot with her friend, a police officer from the tiny St. Louis County municipality of Velda City saw that one of her headlights was out, and stopped her.

Minutes later, Pierce was sitting in the backseat of a police car in handcuffs as a police dog swept through her vehicle, searching for non-existent drugs. The friend who was with her, she says, had her bag searched and was forced to walk home in the dark. Pierce was arrested and charged with four violations of Velda City’s municipal code: having a headlight out, driving while suspended, failure to produce a driver’s license and no proof of insurance. She was told she would have to pay $800 in cash (an amount later lowered to $650) in order to be released. Otherwise, she would be held for 72 hours, meaning Pierce would not be released from jail until early Easter morning. She would have missed work, making her financial situation even more precarious.

Velda City is small, sitting on about one-sixth of a square mile that is home to roughly 1,400 residents. The city brings in more from court fines and fees than it does from either sales tax revenue or property tax revenue, making tickets the highest source of revenue for the entire city. Velda City doesn’t have its own jail. So when Pierce was arrested, she was taken to a jail in St. Ann, which Velda City pays to incarcerate inmates until they give the city money. Pierce said it was a horrifying experience.

“There were ladies in there throwing up, menstrual bleeding going on, pads, tampons laying there all over the place,” Pierce said in an interview. “I didn’t get any water for at least six hours I was there.” 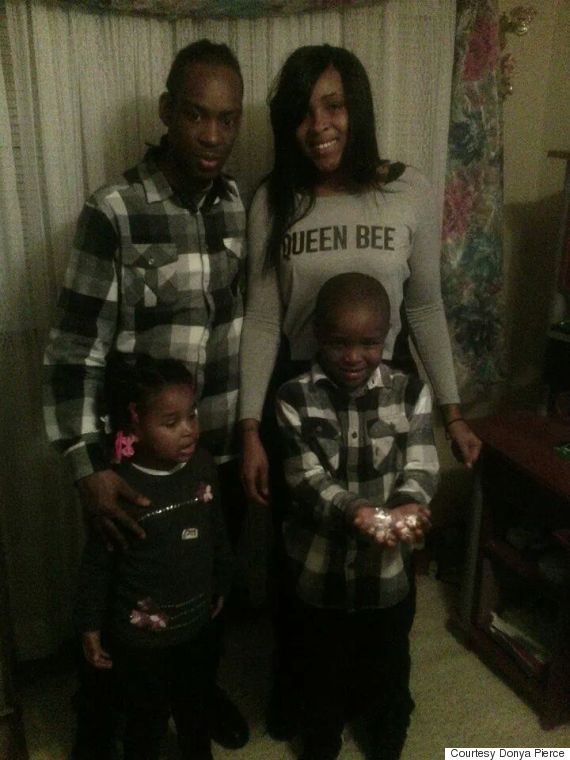 Pierce with her fiancé and her two children.

Velda City, which holds court just twice a month, has a fixed cash bail system, meaning that defendants who cannot come up with any money for their bail are held for at least three days before they are released. It is the same type of system that existed in Ferguson and Jennings -- two cities that are currently facing federal civil rights lawsuits for their bail systems -- as well as several other municipalities in St. Louis County and other places across the country. The Justice Department recently took the position in a federal court case out of Alabama that bail or bond schemes, like those in Velda City, that mandate "payment of pre-fixed amounts for different offenses in order to gain pre-trial release, without any regard for indigence" violate the 14th Amendment's equal protection clause.

Had Pierce's family members not been able to get in touch with pro bono lawyers who were already working their case, she would have been stuck in the St. Ann jail until early Sunday morning. But while she was still behind bars, attorneys quickly got to work. Less than 24 hours after her arrest, attorneys who have been challenging the practices of St. Louis County’s troubled network of municipal courts filed a federal civil rights lawsuit against Velda City. The lawsuit alleges that Velda City is running an "unlawful" and "illegal" bail system that fails to consider individualized factors.

“These fines for people who are poor really do end up destroying their lives,” said Thomas Harvey of ArchCity Defenders, a pro bono legal organization based in St. Louis that is one of two organizations behind the lawsuits against Ferguson, Jennings and now Velda City.

Alec Karakatsanis of the group Equal Justice Under Law, the other organization involved in the lawsuits against the three cities, said Velda City's policy of not accepting commercial bail bonds could be seen as an indication the city was more concerned about bringing in cash than simply making sure a defendant would show up in court.

“The places that do that don’t want to give you the money back. Their whole purpose in doing that is to extort that cash and keep it,” Karakatsanis said of cities like Velda City that do not accept commercial bail bonds. “They want to make sure they get that money in hand.”

The organizations hope to turn the lawsuits into a class action.

Pierce was released shortly after the lawsuit against Velda City was filed. The name of the municipal court judge who had her released was Wesley Bell -- a name that might sound familiar to residents of Ferguson. Bell is one of the two black candidates running for a seat on Ferguson City Council representing Ward 3. (Ward 3 contains the area in Ferguson where Michael Brown was killed in August.) Voters in Ferguson and around St. Louis County go to the polls on Tuesday.

Bell is running against Lee Smith, a long-time Ferguson resident who has gotten the support of Patricia Bynes, a Democratic committeewoman from Ferguson who believes that Bell's involvement in the municipal court system is a knock against him.

In an interview on Monday, Bell said he was surprised by the lawsuit, and suggested it could have had political motivations. (The Huffington Post was not tipped off about the lawsuit against Velda City. A reporter simply stumbled upon it last week during a search of federal civil rights cases filed in the Eastern District of Missouri.)

“I want to give them the benefit of the doubt, because there is not one time that ArchCity has come into my court and I have not helped them with whatever they were asking, because I support what they’re doing,” Bell said. “I’ve been to their fundraisers before in the past, so it disappoints me if, if -- and I’m giving them the benefit of the doubt -- but if they’re using this as political theater right before the election, I would say I would be disappointed. And if that’s what they’re doing, shame on them.”

Bell said that he supported municipal court reform, and pointed to a ticket forgiveness program in Velda City that was praised by ArchCity Defenders. And in a recent visit to Velda City Municipal Court, Bell seemed willing to work with people who appeared before him. One woman appearing in court, a housekeeper from nearby Berkeley, called Bell "reasonable" and "one of the nicest judges" she'd ever seen.

In an interview on Monday, Bell said it wasn't his place to defend the entire municipal court system in St. Louis County, but rather to do what he could to change it.

“I’m getting the impression that you are asking me to defend this system, the whole municipal courts situation in North County and just the state,” Bell said in the interview. “I’m not doing that. What I’m saying is that there are issues, there are courts that aren’t doing it right. There’s no question about that.”

Bell said that he never felt pressure from Velda City Mayor Robert Hensley to increase revenue, as highlighted by the Justice Department's report on the practices of Ferguson's police department and municipal court.

“The mayor, when he hired me, he made it clear, 'Hey, I’m not going to be counting revenue, you just deal with the cases justly.' I thought that’s the way everyone did it, for the most part, but obviously that’s not the case, and there are places where people are pressured to put on revenue,” Bell said. “I could not agree more that courts should not be revenue generators and debtors' prisons, and I can say with certainty that I’ve never sentenced someone to jail."

Velda City’s police department has just seven full-time officers who make an average of under $27,000 per year. The tiny police department has had more than its fair share of scandals. A former auxiliary reserve police officer in Velda City was sentenced to nearly 20 years in prison in 2009 for sexually assaulting a woman during a traffic stop. Two Velda City officers pleaded guilty in 2007 to beating a jailed inmate and lying about it. Another officer was arrested for allegedly choking and kidnapping his girlfriend. Still another officer faced federal civil rights charges for allegedly beating three people, but was acquitted at trial in 2013.

More recently, one Velda City officer who was part of the police response to protests in Ferguson in August had tweeted that he wanted to punch Attorney General Eric Holder in the nose, justified tear-gassing protesters standing in their own back yard, and described the tear gassing of an Al Jazeera crew as collateral damage in a “war zone.” That officer is still on Velda City's force.

Asked why a tiny municipality like Velda City needed its own police force, Bell said there were certainly cities in St. Louis County where it would make sense to consolidate. But he said Velda City residents needed to be in charge of that debate.

“I just don’t think it’s on myself or anyone, I think those residents should have a say," Bell said, adding that he never heard anything about Velda City having a ticket quota.

Velda City Police Chief Donald Paulino, who makes under $45,000, which is less than the average officer makes in nearby Ferguson, has defended the existence of his small department. In a recent interview before the lawsuit was filed, he said all governments rely on revenue from sources like traffic tickets to survive.

"It’s taken out of context whenever people say, ‘Oh they're just stopping to give me a ticket so that the city can get money,’" Paulino said. "People need to take responsibility too. I know as a citizen, I have to have proper insurance, license plates, ID, etc. to drive my vehicle. If I don’t, I’m subject to a ticket as well, as police chief.”

“All of that money is one big pool. The money goes toward bridges, schools, universities, EBT cards to help our children. All that money helps. The bottom line is, if you do all the right stuff, what ticket are you going to get? None. And that’s my answer," Paulino said.

As for Pierce, she managed to avoid telling her children about her arrest, and even made it to her job at an assisted living facility. She's working toward becoming a registered nurse.

But Pierce, who said she took part in protests in Ferguson following Brown's death in August, said she's still not sure how to teach her children about dealing with officers. 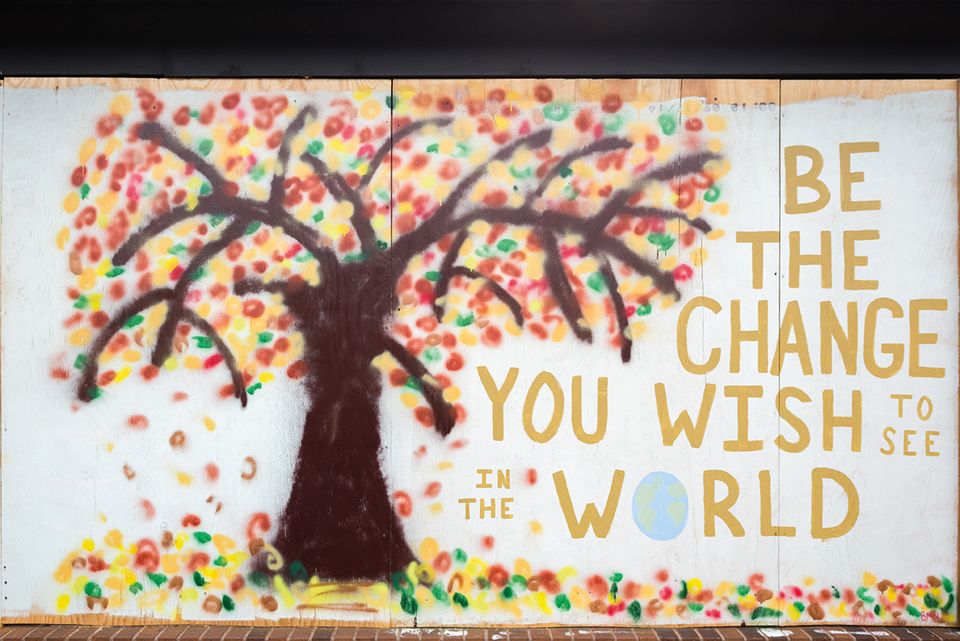