Last year, 8-year-old Oliver Sanchez became the poster child of the nightmare that is now Venezuela. He had non-Hodgkin's lymphoma and was in severe danger because hospitals and medicine banks had run out of supplies. Countless sick and desperate Venezuelan patients and family members looked to him with hope as he bravely protested in the streets with a handmade sign that read, "I want a cure, peace and health." The media and public rallied around Oliver, posting photos of him on social media, begging the government to do something.

On May 26, Oliver died. He reportedly contracted meningitis and, due to medicine shortages, succumbed to the infection. Oliver's death spread a wave of rage among Venezuelans. Opposition lawmakers held up pictures of the boy to decry what they called an avoidable death. And yet, the people and Oliver's family have heard not a word from the government. The silence is deafening.

This kid was begging for medicine, but Maduro sent policemen to stop him

Venezuela has the highest inflation rate and the second highest murder rate in the world and a scarcity of basic goods and medicine only conceivable during war. But there hasn't been a war in Venezuela, or even a natural disaster.

What led to such a crisis? It's a complex story of excess, megalomania and hate. Moises Naim and Francisco Toro write brilliantly how the country fell apart during 17 years of rule by Hugo Chavez and and his hand-picked successor, Nicolas Maduro. The images tell the story: long lines of humiliated citizens, with numbers marked by soldiers on their arms, trying to buy subsidized food so scarce that it's sold for 10 to 20 times its price on the black market. Increasing numbers of people, unable to buy food, are resorting to scavenging in the trash, fighting police and looting grocery stores.

In this beautiful corner of the Caribbean, electricity is rationed, so government employees work just two days a week; water is severely polluted; people leave the few jobs that are left to search for food or to work on the black market. Several thousand companies have closed. The schools are being deserted because teachers must look for groceries as well, and children are often used by families to keep places in long lines.

The difficulties to produce or import food remain unchanged, so scarcity hardens every week, as does inflation. Once you gather the money to buy, say, a kilogram of chicken -- which could be a month's earnings at minimum wage -- you might find that the price increased dramatically overnight. 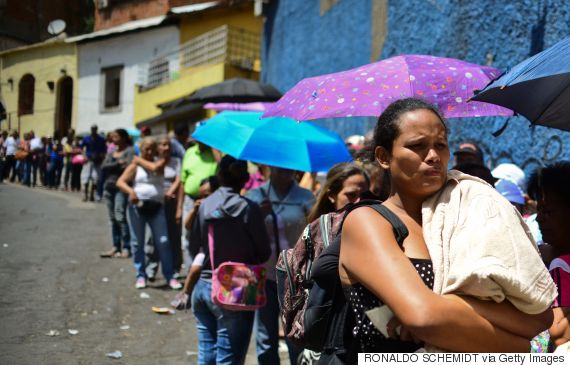 People line up to buy basic food and household items outside a supermarket in the poor neighborhood of Lidice, in Caracas, on May 27. (RONALDO SCHEMIDT/AFP/Getty Images)

However, Maduro hasn't employed available measures to turn the economy around the corner. He prefers the advice of his Marxist advisor from Spain to the businessman chosen as minister of economy. He keeps saying that the crisis is a conspiracy and blames everything, even crime, on the opposition. In response to unrest, he declared a state of emergency, allowing police and military to arrest or shoot anyone.

The government's strategy, as far as one can infer from its actions, is to resist and wait for higher oil prices or a new big loan from China. To maintain order, Maduro seems to rely on the Electoral Council, the Supreme Court and the weapons of those who support him: the military, paramilitary and police, which are deeply involved in smuggling, drug dealing and kidnapping.

Uncontrolled violence would benefit the strongest in a country that has turned into a crime sanctuary.

An opposition alliance won parliamentary elections last December but it can't make any new laws effective. The Supreme Court, controlled by Maduro, declares unconstitutional everything that the National Assembly does. Isolated as a power with zero influence aside from its popularity, the opposition looks for ways to break the Chavista hegemony over Venezuela's institutions.

Part of the opposition, led by popular governor Henrique Capriles, demands a recall referendum against Maduro. According to the constitution, if Maduro is recalled in 2016, a general election should follow and Capriles can run for office -- for the third time. If the referendum happens in 2017 and Maduro loses it, his vice president becomes president until 2019, so Chavismo would stay in power. A recall next year is the preferred scenario for those Chavistas who are against Maduro and for those within the opposition who don't want Capriles as president.

Polls say a recall is what millions hope for. People need change, and they need it now. But Maduro continues to pressure the Electoral Council, which ignores its own rules to boycott efforts toward a referendum. Meanwhile, the opposition cries for help from neighboring countries.

The secretary general of the Organization of American States, Luis Almagro, requested an emergency meeting to consider expelling Venezuela, saying that "grave alterations of democratic order" had been committed by the government. But thanks to some surprising help from Argentina's new right-leaning government, the effort has stumbled.

The Maduro regime recently added another terrible idea to its defensive tactics: forbidding stores to sell subsidized groceries and creating Soviet-style committees called CLAPs to deliver them directly to the people. Not to everyone, though: CLAPs give food only to Maduro's supporters or sell it on the black market.

People's worries aren't nonsensical. None of the political actors can control the outcome of this crisis -- not even Maduro, who is despised among some Chavista factions that can't restrain him. There are no referees; public institutions lost independence years ago, and Chavismo doesn't respect the Catholic Church or intellectuals. Nobody trusts anyone. Chavistas around the president probably fear a wave of revenge if they're ousted.

Poor people clashing with police in a flash protest that reached the heart of Caracas. We haven't seen this before https://t.co/DPzen9e1VK

If the proposed OAS dialogue fails and the recall referendum is postponed, can tensions push Venezuela into a civil war for the first time since the 1860s? The opposition has neither the means nor the will to build a rebel army. What about a coup d'état? This is more probable but nobody knows for sure who's against whom in an army with lots of privileges, where dissent is severely punished. The generals display nothing but loyalty to the political movement that brought them back to influence after 40 years of civilian presidents.

The most likely scenario is the most terrifying: generalized looting. Will the police and the army shoot the mob, like they did during the 1989 revolt, years before the ascent of Chavez? Or will they accompany Venezuelans in a rampage for survival? The word is that some units won't follow Maduro's orders to kill in such a situation. 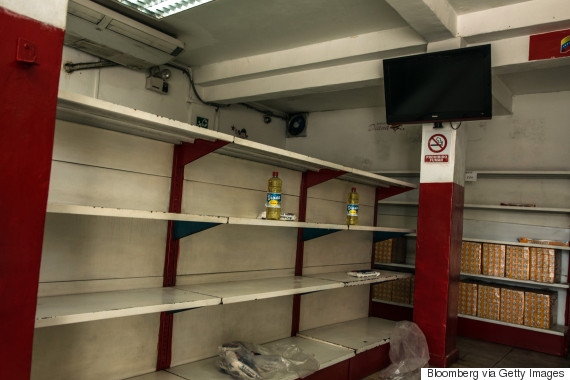 Only two bottles of cooking oil remain on the shelf at a government grocery store in Caracas on Jan. 27, 2016. (Meridith Kohut/Bloomberg via Getty Images)

Uncontrolled violence would benefit the strongest in a country that has turned into a crime sanctuary. Powerful gangs target police. They have assault rifles and grenades, they rule over jails and entire towns, they hijack boats at sea. They would dominate looting and resell stolen goods. And Venezuela could end up as a failed state in the Caribbean.

Fantasy? Not quite: there's already a lynching epidemic, and at least one person accused of robbery was burned alive. The breaking of what's left of social cohesion could be around the corner.

Everybody feels that something big can happen any time. Those who can are trying to prepare for the worst. Ordinary people are just trying to survive day by day. Some of them manage. Others don't.

Venezuela Is About to Explode
Protestas en Venezuela 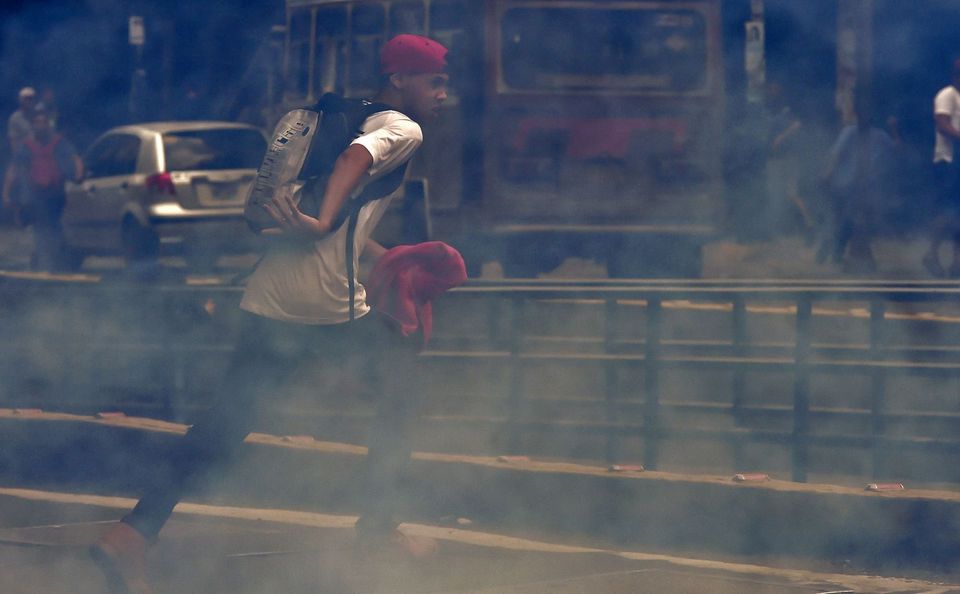