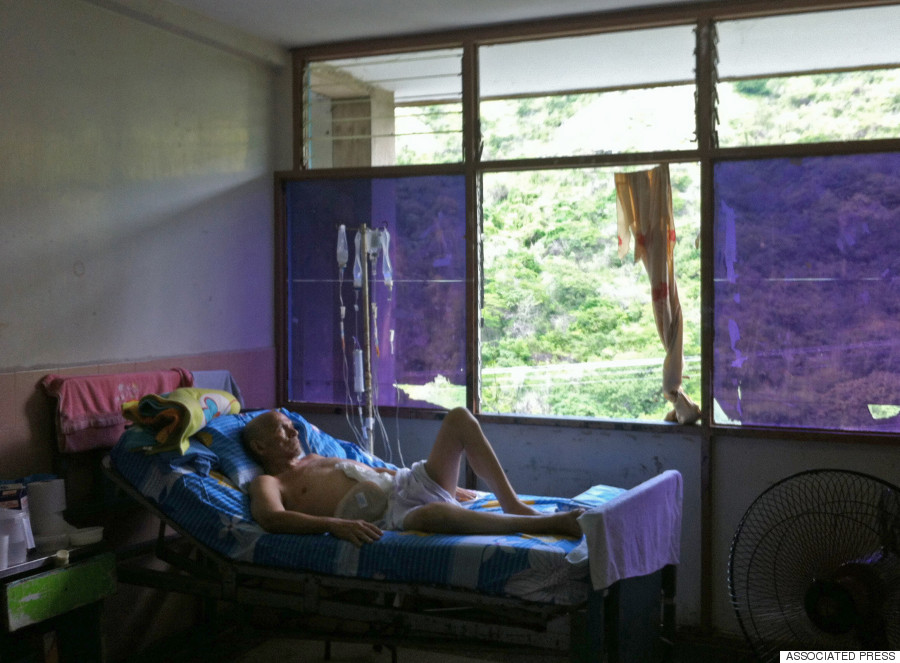 VALENCIA, Venezuela -- I had a bad feeling the day my dad told me he had two hugely swollen inguinal nodes and a persistent fever. That your father could have cancer is always scary; in Venezuela, it's pretty much a death sentence. Everything except weapons and illegal drugs is scarce in my country of origin. Eight out of 10 pharmaceutical drugs are either difficult or impossible to find. Patients are dying because essential medicine is just not there.

I was already very worried about my son. He has borderline personality disorder and needs four different pills every day. In December, he ran out of antidepressants and was unable to replace them because of the shortages. He's falling into the darkness again. Without all his meds, he's vulnerable to psychotic episodes and suicide attempts.

Then my dad's diagnosis came, a couple days before Christmas: Non-Hodgkin's lymphoma, stage III. The doctors planned his first dose of chemotherapy for mid-January, but he had to bring everything to the clinic -- from the drugs to the needles to the saline solution. And with cancer, time is key. So we went on a mad dash search to find the medicine any way we could.

My brother went to dozens of drugstores, with little success. The drugstores are heartbreaking places -- almost as empty of products as the ones I saw in Cuba in the 1990s and full of desperate people in search of all kinds of drugs. My brother took my dad to the national social insurance service, the Venezuelan Institute of Social Insurance, or IVSS. Like the rest of Venezuela's public health care network, IVSS is overwhelmed by corruption, mismanagement and lack of funding. Still, its staff treated my dad with empathy and gave him, for free, all the medicine on our list that they could. IVSS distributes many of the most expensive and critical medicine for cancer, but it has less and less every month.

IVSS didn't have two drugs my dad needed -- prednisone and dexrazoxane. So my brother asked everyone he knows. He spread the word through Facebook and WhatsApp. Finally, he found a lead on the black market: someone who knows a guy who knows a guy who sells the medicine for several times its original price. This is medicine taken out of the public system by networks of smugglers. The man sold my brother all the prednisone we need for the entire treatment -- seven boxes. Each box had a price tag that read 16 bolívar, the local currency; my brother paid 1,500 bolívar each.

We still had to find the needles and the saline solution. My brother found them on a smuggler's table, unabashedly set up in front of a public hospital. The official price for a bottle of saline solution is 8 bolívar: he had to pay 2,000 bolívar a bottle. The pharmacist in the same hospital told him that just in the last week alone, 20 cancer patients had died -- patients who in normal circumstances would probably have lived much longer.

And the scarcity is getting worse, even on the black market. A doctor who works in a private clinic, who requested to remain anonymous to protect her safety, told me that she has to write prescriptions to veterinary pharmacies: she's forced to ask patients to buy drugs made for animals. And she's not the only one. Some spontaneous networks have sprung up to help people looking for medicine, such as a group of moms at a school who share acetaminophen and cough syrup; Twitter accounts with thousand of followers that spread the word of people looking for medicine; semi-clandestine initiatives by the few remaining private companies or by the increasing Venezuelan diaspora.

Why is this happening, in the country that has the biggest oil reserves on the planet?

Chavez's "21st century socialism" managed to almost completely destroy the private sector in favor of an obese state-owned subsidized economy and to burn an oil bonanza in an illusion of consumerism. Now ruled by Chavez's political heirs, Venezuela is one of the most corrupt countries and has one of the most controlled economies in the world.

The economy's falling apart for many reasons. The national oil company cannot feed the entire economy with oil prices so low. Inflation in Venezuela is the highest in the world -- the International Monetary Fund predicts it will be 720 percent at the end of 2016. The nation must import almost everything. In response: Venezuelan President Nicolás Maduro repeats ad nauseam that there is a U.S.-organized conspiracy against the Bolivarian Revolution.

She has to write prescriptions to veterinary pharmacies: she's forced to ask patients to buy drugs made for animals.

The most dramatic symptom of this metastasis is the scarcity of food and medicine. Few drugs are still locally produced. The last remaining multinational pharmaceutical companies may leave this year, if the situation remains the same. Price controls mean that many items are sold at a price below their cost, removing the incentive for importers to bring in goods.

The currency control regime is a Kafkaesque labyrinth of bureaucratic barricades. Many fraudulent schemes have been discovered in the imports of medicine, both in government institutions and private companies, and there's also smuggling to Colombia and other neighboring countries, which contributes to scarcity. Instead of acknowledging its mistakes and lifting the price controls, the Chavista regime reacts with the paranoia of a menaced dictatorship. Maduro has ordered the arrests of supermarket managers, accusing them of creating discontent.

This health crisis is the subject of governmental measures of censorship similar to the ones taken on crime and inflation. Venezuela's Ministry of Health has not published its monthly report on communicable diseases since 2014; until last week, Maduro and his administration didn't mention the word "Zika," despite the alarming number of cases in the country.

The government buys medicine too, especially from political allies like Cuba. Sometimes those drugs are untested or just junk. Bureaucracy and corruption delay the distribution. And many doctors have reported being given expired and useless medicine.

Now that the opposition party controls Congress, it is trying to establish -- with the drugstore union -- that Venezuela is experiencing a humanitarian crisis. Recently, the opposition alliance brought people to the Congress floor who shared stories about losing relatives due to the scarcity of medicine. In response, the Chavista caucus said, in front of the mourning citizens, that the family members had been forced to give a show "with a necrophilic approach."

Public hospitals are even more terrifying. In the University Hospital of Caracas, the head of cardiology, Iván Machado, said he looks to his patients wondering which one will be the next to die because his team can no longer perform surgeries that used to be routine. A chief oncologist said he uses 1940s methods because the modern equipment has been broken for months.

People waiting in an emergency room in a health center in Caracas, Venezuela on Feb. 1. (Carlos Becerra/Anadolu Agency/Getty)

A young oncologist in another hospital in Caracas, who requested anonymity for her own protection, belongs to a species in risk of extinction: a new doctor who hasn't left Venezuela yet. After spending many years studying, she earns less than the minimum wage, trying to provide chemotherapy in an old building in the middle of a slum. She works in a hospital with no reliable water, sewage or electricity, with broken elevators and with services shutting down, including radiology. Three-quarters of her med school classmates have already left the country because of such conditions, she told me.

Worsening matters, with the crisis comes crime, especially in Caracas, which has one of the highest homicide rates in the world. Sometimes a malandro, a Venezuelan term for gang member, holds a gun to the head of a surgeon, ordering him or her to save the life of his wounded accomplice. Other times, a malandro comes into a hospital and kills one of his ailing enemies.

Hospital patients and personnel are robbed, which the young female oncologist said she witnessed. "Some of the patients blame us for their predicament," she told me. "We do what we can with what we have. Often, we just don't know what to expect of some strange products the government imports. Like those acrobats in motorcycles inside a sphere -- if we don't keep running, we die."

She's furious with the new health minister, who said that Venezuelans are wasting medicine. She can't send medicine to her grandmother in the countryside because the mail companies refuse to carry medicine, food or cellphones because they can't guarantee against theft. "And if I try to bring her the medicine by car and I am stopped in a National Guard checkpoint, I can be accused of trafficking," she said. On top of everything, she recently discovered that she has the Zika virus.

My dad and son are in danger but at least we have options -- most Venezuelans don't. Venezuela is under siege, but there is no war. We are living through a catastrophe, but no natural disaster has occurred. The regime ludicrously blames this humanitarian crisis on the citizens and on the U.S. The regime's number two in command, Diosdado Cabello, claims that the opposition has fabricated the crisis so as to give the U.S. an excuse to invade. While this madman awaits an invasion that will never come, a desperate pediatrician in a hospital in San Cristobal cries out that premature babies are "dying like chickens." It's true, alas. The regime is like a chicken farmer with an Armageddon delusion. We Venezuelans are like 29 million chickens, trapped in his madness.