CARACAS, Oct 4 (Reuters) - Venezuelan President Hugo Chavez faces the toughest election of his 14-year rule on Sunday in a vote pitting his charisma and oil-financed largesse against fresh-faced challenger Henrique Capriles' promise of jobs, safer streets and an end to cronyism.

Chavez, 58, staged a remarkable comeback from cancer this year and wants a new six-year term to consolidate his self-styled socialist revolution in the OPEC nation.

Capriles, a boyish 40-year-old state governor, has run a marathon eight-month campaign of house-by-house visits that have galvanized the historically fractured opposition and set up its best shot at the presidency since Chavez's election in 1998.

Victory would allow Chavez to continue a wave of nationalizations and consolidate control over the economy, though a recurrence of his cancer would weaken his leadership and possibly give the opposition another chance.

"Venezuela was sinking when it was governed by the bourgeoisie, and our people have made history with a revolution that pulled Venezuela from the mire," the flamboyant Chavez told adoring supporters at one of his final campaign rallies.

The former military officer, who survived a short-lived coup against his rule in 2002, has developed a near cult following by casting himself as a messianic reincarnation of 19th century liberation hero Simon Bolivar while pushing billions of dollars in oil revenue into social programs.

Most best-known pollsters put Chavez in front. But two have Capriles just ahead, and his numbers have edged up in others.

The opposition leader has had more momentum in the final days of the campaign and he is confidently predicting victory.

The vote is also a cliffhanger for other left-wing governments in the region, from Cuba to Ecuador, who depend on Chavez's discounted oil sales and generous financial assistance.

Seamlessly flipping from jocular prankster to blustering anti-capitalist crusader, Chavez's stories of his poor but happy childhood in a small village have helped him create intense emotional bonds with poor Venezuelans who see him as one of the family.

For nearly a decade he has won over voters with free health clinics, subsidized groceries and new universities.

Over the last year he launched programs to give pensions to the elderly, stipends to poor mothers, and tens of thousands of new homes were handed over on live television to tearful supporters.

At a rally in his hometown of Sabaneta, Chavez stood sweaty and tired-looking on the back of a pick-up truck pushing though a throng of supporters. Supplicants shouted to him asking for help getting a home or a job, or thrust hand-written letters into boxes and large bags carried by his staff.

"I came with 12 people to tell him we're going to vote for him," enthused Emilia Fernandez, 45, a sugar worker.

Nationalizations have weakened private enterprise and given party apparatchiks growing control over jobs. Weak law enforcement, dysfunctional courts and plentiful arms have made Venezuela more violent than some war-torn countries. Frequent blackouts are an annoying reminder of squandered oil income.

"Each one of you should make a list of the problems that you have, and ask yourself, how many of those problems has this famous revolution solved for you?" the wiry and sports-loving Capriles intoned at a recent rally in the Andes.

The business-friendly law graduate easily won an opposition primary election in February and has united anti-Chavez parties like no one before him. His rallies have been notably more energetic and swollen with ecstatic fans in the final weeks.

Sporadic violence has dogged the campaign, with three Capriles activists shot dead last weekend, demonstrating the volatile atmosphere and potential for violence around the vote.

Capriles has promised to shed Chavez's doctrinaire vision of a state-led economy for a pragmatic balance between social welfare and free enterprise. He calls himself an admirer of Brazil's market-friendly left, which has pulled close to 35 million people into the middle class over a decade.

Chavez has made ample use of state resources to bolster his campaign, speaking for hours about the virtues of socialism in "chain" broadcasts that all public access channels are required to run. The electoral authority has demurely declined to regulate such broadcasts, calling them "institutional" messages.

Despite complaints of Chavez's advantages on the campaign trail, opposition leaders say they see low risk of fraud during the electronic balloting itself. There will be no formal international observation of the vote, though local groups will be present and voting centers will have witnesses from both sides.

Chavez's frequent ballot box victories over the last 14 years have undermined shrill opposition criticism that he is a dictator.

But he has never had to hand over power.

Though he accepted defeat in a 2007 referendum on his proposed overhaul of the constitution, in less than a year he used special decree powers to make many of the changes that voters had rejected.

A win for Chavez could prompt a sell-off of Venezuelan bonds, which have risen steadily since June and jumped in recent weeks as investors bet on a possible Capriles win.

Venezuela's heavy borrowing has made its bonds among the most actively traded of emerging market debt - creating an odd romance between Wall Street and one of the world's most virulent critics of capital markets.

Capriles is promising to improve the country's finances by cutting wasteful expenditures and halting politically motivated gifts to allied left-wing and anti-American nations.

"The candidate of the government reached office with good intention, but he's no longer interested in change, he's sick with power," Capriles said this week. "This government's time is up."

* For multimedia coverage, go to http://reut.rs/QzUtvN (Additional reporting by Mario Naranjo in Sabaneta; Editing by Kieran Murray and Cynthia Osterman) 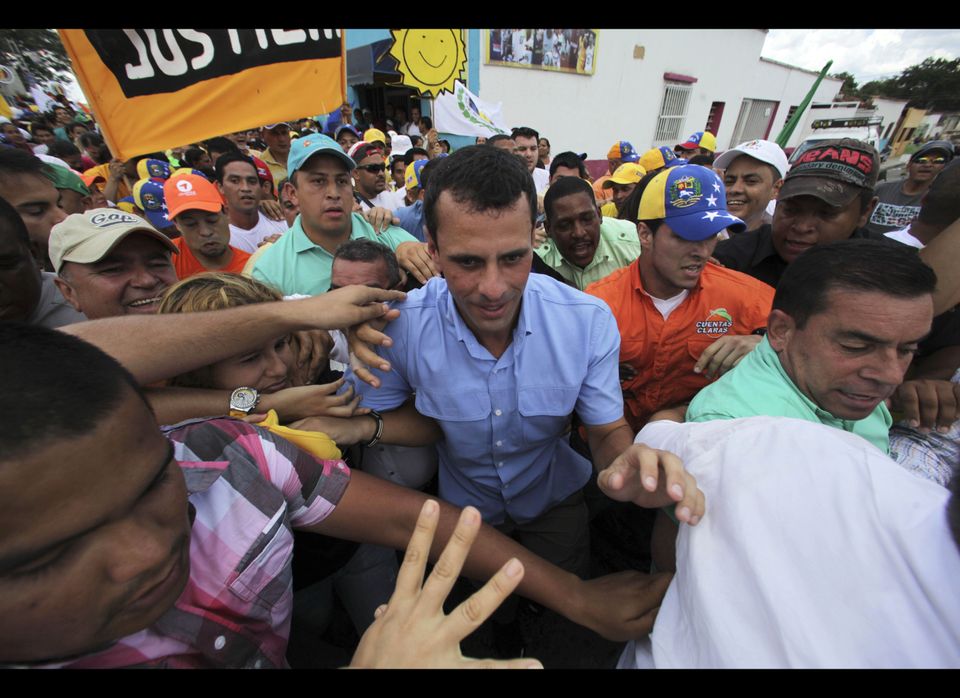