President Donald Trump drew rare bipartisan praise for his decision to recognize Venezuelan opposition leader Juan Guaidó as the country’s head of state after the former head of the National Assembly declared himself interim president.

The U.S. and Venezuela have longstanding tensions over sovereignty, trade and ideology, and the Trump administration has recently ramped up sanctions on Venezuela’s state-run oil industry, refusing to rule out military action against the country’s left-leaning authoritarian President Nicolás Maduro.

Senate Minority Whip Dick Durbin (D-Ill.) seemed to speak for the bipartisan foreign policy establishment when he welcomed Trump’s decision to recognize the newcomer, declaring on the Senate floor his support for Guaidó, who was relatively unknown in Venezuela until about a month ago. The comments reflect the degree to which the Democratic Party remains less willing to question its long-standing support for U.S. intervention in the affairs of foreign governments.

HuffPost reached out to all of the Democratic presidential candidates ― both those officially in the field and those who are expected to announce ― for their positions on U.S. policy toward Venezuela.

We asked the candidates and would-be candidates for their opinion of Trump’s recognition of Guaidó, as well as sanctions, military action and other policy options.

None of the candidates or would-be candidates endorsed national security adviser John Bolton’s insistence that “all options are on the table,” and the Democrats who did answer all rejected the possible use of military force to remove Maduro. Trump has advocated for a military invasion of the oil-rich South American country in the past, but Venezuela experts questioned this policy tactic and viewed that scenario as unlikely. However, other observers agreed with Trump’s recognition of Guaidó.

In a statement, Meredith Kelly, communications director for Gillibrand’s exploratory committee, denounced Maduro’s “corrupt reign,” declaring that “America must stand with the Venezuelan people in their struggle for human rights and their country.”

Then Kelly laid out Gillibrand’s recommendations, which stop short of military action.

“Senator [Kirsten] Gillibrand (D-N.Y.) supports working with our allies to recognize Juan Guaidó - who was legitimately elected - as the interim president under the Constitution until Venezuela can hold new elections,” said Meredith Kelly, communications director for Sen. Gillibrand’s presidential exploratory committee. “And while she believes economic sanctions are the appropriate response to achieve this, she does not support sending troops to Venezuela.”

“After years of corrupt and failed authoritarian socialist regimes, Venezuela is faced with a humanitarian crisis resulting in millions of displaced refugees and a country in economic ruin,” former Rep. John Delaney (D-Md.) told HuffPost in an email. “I support the emerging leadership in the country and the United States should provide strong regional leadership in transitioning the new government. The United States should work with our partners in the region to provide significant humanitarian aid that gets to the Venezuelan people.”

Delaney supports sanctions “to increase pressure on Maduro,” he said, adding that “the Administration must strike a careful balance of achieving the desired effects with potential ramifications for the Venezuelan people who have already suffered so much.”

But he opposes any military effort to depose Maduro.

“Absent protecting American citizens,” Delaney said, “I do not support military intervention in this transition, nor using force to remove Maduro; the Venezuelan people must demand true democracy and decide their own future.”

He stopped short of spelling out his views on recognizing Guaidó or sanctions.

“We should work with our allies and use economic, political and diplomatic leverage to help bring about free and fair elections, limit escalating tension, and ensure the safety of Americans on the ground,” Brown said.

Sen. Elizabeth Warren (D-Mass.), who has announced her plans to run for president, expressed a similar sentiment to Brown, but she condemned an escalation of sanctions as well.

“The Venezuelan people deserve free and fair elections, an economy that works, and the ability to live without fear of violence from their own government,” she said. “Instead of reckless threats of military action or sanctions that hurt those in need, we should be taking real steps to support the Venezuelan people.”

Pete Buttigieg, Mayor of South Bend: Calls for free and fair elections so ‘the Venezuelan people can determine their future.’

“The Maduro government has wrecked its claim to international legitimacy and it’s time for free and fair elections, so that the Venezuelan people can determine their future,” Mayor of South Bend, Indiana, Pete Buttigieg told HuffPost in an email. “Sanctions are an appropriate tool for dealing with bad actors and in this case they should be targeted and aimed at bringing about new and legitimate elections with international observers and poll protections.”

Buttigieg, a veteran of the war in Afghanistan, opposes military intervention, and he questioned Bolton’s role as national security adviser given Bolton’s past in pushing the U.S. into war in Iraq.

“When it comes to military intervention, one clear lesson of foreign policy in my lifetime is that even if you would like to see regime change, you shouldn’t recklessly send out American troops and put their lives on the line to bring about a new government in a foreign country,” he said. “I remain puzzled that someone who helped lead us into the Iraq war is in a position of great trust and responsibility as the National Security Adviser making recommendations on war and peace.”

Sen. Bernie Sanders (I-Vt.), who is expected to announce a bid for the presidency, tweeted his thoughts about the situation on Thursday.

In a three-tweet thread, Sanders, who has gotten more involved in foreign policy since his 2016 presidential run, at once condemned the authoritarian tactics and economic failures of the Maduro regime and warned against backing “regime change or supporting coups.”

“The U.S. has a long history of inappropriately intervening in Latin American nations; we must not go down that road again,” he wrote.

But we must learn the lessons of the past and not be in the business of regime change or supporting coups—as we have in Chile, Guatemala, Brazil & the DR. The US has a long history of inappropriately intervening in Latin American nations; we must not go down that road again. 3/3

Rep. Tulsi Gabbard (D-Hawaii): U.S. should ‘stay out of Venezuela.’

“The United States needs to stay out of Venezuela,” Gabbard said in a tweet last week after the administration recognized Guaidó. “Let the Venezuelan people determine their future. We don’t want other countries to choose our leaders―so we have to stop trying to choose theirs.”

Gabbard’s campaign did not elaborate on her stance on the Trump administration’s sanctions against the Maduro government.

In a brief interview on Capitol Hill, Sen. Cory Booker (D-N.J.) told HuffPost that Maduro “is alarming to me on many levels” but did not elaborate beyond that. His office did not respond to further requests for comment.

“I support the people of Venezuela standing up against Maduro, installing a new leader, and restoring democracy in Venezuela,” Klobuchar said in an email.

A spokesman for former Vice President Joe Biden, who is reportedly considering a run, declined to comment.

The campaigns or exploratory committees of Sen. Kamala Harris (Calif.), Washington Gov. Jay Inslee and former Department of Housing and Urban Development Secretary Julián Castro did not respond to inquiries about the candidates’ stances on Venezuela.

‘We all think the dictator must go.’

Maduro was elected in 2013, after the death of socialist President Hugo Chávez, who survived a coup attempt that was possibly linked to the Bush administration in 2002. Since he came to power, Maduro has faced internal and international opposition over his authoritarian crackdowns on political dissent, and resistance to his presidency has intensified amid an economic crisis spurred by global declines in oil prices.

Maduro was a subject of debate within the Obama administration, as it weighed whether to sanction the president and top Venezuelan government officials amid allegations of human rights abuses. Obama sanctioned seven Venezuelan officials, including Maduro, in 2015, a decision that drew rebukes across Latin America.

The situation has continued to deteriorate since, and an estimated 3 million refugees and migrants have left the country amid economic turmoil, including spiraling inflation and food and medicine shortages. Maduro won a second term in May 2018, after an election marred by official boycotts from opposition parties and claims that the president had acted to rig the results in his favor. The opposition parties declared the results illegitimate and were joined by the United States, European Union, and several large, influential Latin American democracies.

Maduro has clung to power since Guaidó declared himself the legitimate leader on Jan. 23 amid widespread protests both in support of and against the government. Leaning on the support of the armed forces, Maduro opened the door to dialogue with the opposition and Guaidó as protests erupted again on Wednesday. But there is no guarantee that the dispute will lead to new elections or come to an immediate resolution, even as the Trump administration has said it will use any means available to remove Maduro from office.

We cannot control the outcomes [in foreign countries] no matter how much we wish to or thought we could in the 1990s. We have to have more humility about our ability to shape the world in our own image. Daniel Bessner, a University of Washington historian of U.S. foreign policy

Whatever the outcome, Venezuela’s future and what, if any, role the United States should play in it could become a major international relations question in the 2020 Democratic presidential primary, which some left-wing foreign policy observers hope will be a testing ground for new ideas much in the way that domestic policies like Medicare for all shook up the 2016 contest.

The discussion about Venezuela policy is an early indicator of those candidates’ appetite for foreign intervention ― or lack thereof, according to Daniel Bessner, a University of Washington historian of U.S. foreign policy, who has encouraged progressive Democrats to adopt bold foreign policy ideas.

“What candidates will say will determine whether they will depart from the assumptions that have guided U.S. foreign policy for a long time,” Bessner said.

Bessner said he is skeptical of the American inclination to “do something” any time major problems arise in a foreign country.

“We cannot control the outcomes [in foreign countries] no matter how much we wish to or thought we could in the 1990s,” he said. “We have to have more humility about our ability to shape the world in our own image.”

Lawrence Korb, a senior fellow at the Center for American Progress who has sometimes broken with Washington’s interventionist consensus, nonetheless supported Trump’s decision to recognize Guaidó. He does not think the debate over Venezuela reveals fundamental philosophical disagreements among Democrats.

“It’s sort of nuanced,” he said. “We all think the dictator must go, the question is what’s the best way to do it.”

CORRECTION: A previous version of this story indicated that Sen. Klobuchar had not responded to a request for comment. Due to a communication error, her team did not receive the request. 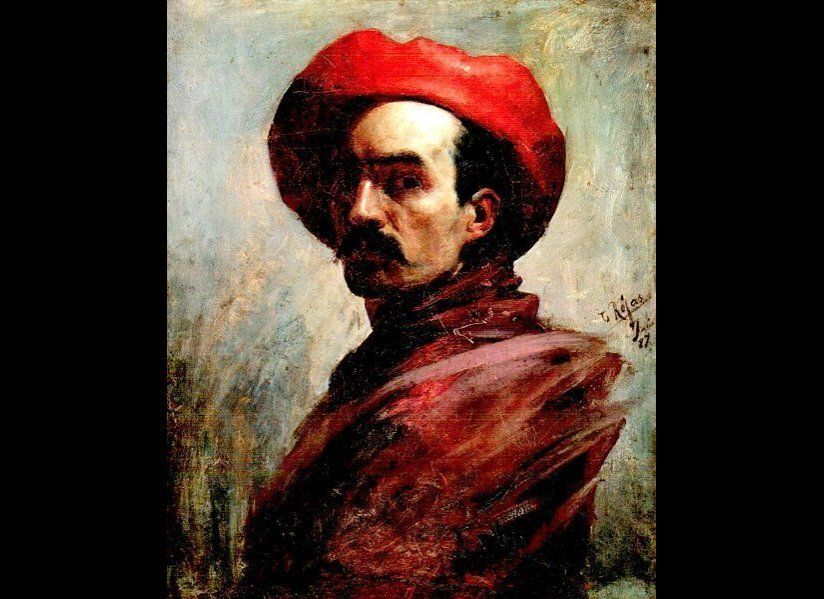 1 / 15
Cristóbal Rojas
<a href="http://www.elnuevocojo.com/artes/item/283-cristobal-rojas-el-pintor-del-sufrimiento" target="_hplink">Cristóbal Rojas </a>was one of the most prolific Venezuelan painters of the 19th century. Influenced by Impressionist painters of Europe, Rojas's styles ranged from Romantic to Impressionist. In 1883, Rojas exhibited his "La muerte de Girardot en Bárbula (The death of Girardot in Bárbula)" in the Salón del Centenario to commemorate the birth of Simon Bolivar. IMAGE: Self portrait by Rojas, 1887.
Wikimedia