Venezuela just became more authoritarian and chaotic than ever before. Sunday’s fraudulent elections marked a new chapter in the republic’s history. As a result of the illegitimate and rigid Constituent Assembly vote, the country now finds itself well on its way to becoming a “communal state” run by the central government.

The 545 largely pro-regime constituents elected over the weekend are now directed by Venezuelan President Nicolás Maduro’s government not merely to rewrite the constitution, but also to establish a new communal political system with absolute power, not unlike those in Cuba or North Korea. The prospect of such a system risks total economic collapse, a worsened humanitarian crisis and permanent civil conflict in Venezuela.

Venezuela just became more authoritarian and chaotic than ever before.

But it’s not too late to put a stop to this.

The Maduro regime is in survival mode. It has violated human rights and international norms. With the Supreme Court’s decision to revoke its takeover of the opposition-led National Assembly’s powers in the spring and now the creation of the Constituent Assembly via a “sham election,” even with marginal gains, the regime finds itself stuck defending itself from immense backlash. Countries around the world should work on facilitating a way out for Maduro and his inner circle to prevent the all-out collapse of Venezuela. To do this, the international community needs to take the following immediate actions.

1. U.S. President Donald Trump needs to formally announce that the government coming out of the illegitimate Constituent Assembly process will not be recognized.

Maduro and his loyalists have asserted that the Constituent Assembly would be able to dismiss authorities, dismantle institutions like the National Assembly, enact new laws and codes, and modify election cycles. It is also probable that the illegitimate Constituent Assembly will not only assume all legislative powers, but announce a new executive branch with a new president as well. Additionally, the new assembly will likely work to institutionalize violations of due process by trying civilians in military courts, regulating and limiting the right to protest and destroying the last remaining press freedoms. All of these actions need to be seen as illegal by foreign governments, particularly the United States.

On Monday, the White House appeared to agree with this and announced that the U.S. would place sanctions on Maduro, saying that he “is not just a bad leader. He is now a dictator.” But this statement and action will only be effective if the U.S. does not waiver and continues to firmly renounce such moves by the Venezuelan government.

'Maduro is not just a bad leader. He is now a dictator.' H.R. McMaster, President Trump’s national security adviser

Colombia, Argentina, Mexico, Spain and other countries have also already made similar statements, but more world leaders and multilateral organizations need to follow. Furthermore, each government needs to reaffirm this sentiment by announcing that it will not recognize any contract, treaty or agreement authorized by the new Constituent Assembly, instead continuing to recognize the National Assembly elected in December 2015.

Given the regime’s tendency to repress its people and its complete lack of recognition of the July 16 referendum mandate to suspend the Constituent Assembly and hold free and transparent elections, international pressure is a crucial factor in driving the much-needed transition to restore constitutional order in Venezuela.

2. Other democratic countries should further target the regime and implement sanctions.

The U.S. has been leading the way by slapping sanctions, followed by Colombia, Panama and Mexico ― and Canada may soon also implement sanctions of its own. But other democratic countries should increase pressure on the regime’s leadership as well.

Knowledgeable U.S. government sources have reportedly indicated that the U.S. has found and subsequently frozen millions in assets linked to current Venezuelan Vice President Tareck El Aissami. And freezing these assets ― and other assets abroad ― increases the pressure on Maduro and his inner circle by limiting their financial flexibility, in turn leading to their inability to continue engaging in criminal activities if they wish to remain financially stable.

International pressure is a crucial factor in restoring constitutional order in Venezuela.

3. The U.S. and other governments should pressure Maduro by publicly calling out unlawful actions committed by his government’s officials.

The U.S. and other governments should not only pursue further targeted economic sanctions, but they should also release information to the public that links the regime with unlawful actions, including drug trafficking, money laundering and corruption.

Sen. Marco Rubio (R-Fla.) has stated that Diosdado Cabello, a top lawmaker in the ruling Socialist Party, is the “Pablo Escobar of Venezuela.” More U.S. government officials should also speak out against the illicit activities of the Venezuelan government to delegitimize its authority.

4. Access to international financial markets should also be denied to any government named by or affiliated with the Constituent Assembly.

This should also include any entities of that government, including Petróleos de Venezuela, or PDVSA, Venezuela’s state-run oil company. While the U.S. did place sanctions on some Venezuelan officials on Monday, those sanctions failed to include some key parts of the government.

This needs to change, and when it does, the U.S. cannot be the only major world player to make this move. Additional sanctions further limit the Venezuelan government’s access to financial assistance that supports its unlawful activity in a way that current sanctions fail to.

It’s just a matter of days or weeks until Venezuela becomes a North Korean replica.

With more than 120 days of ongoing protests, the deepening economic and humanitarian crisis, sanctions and the recognition of the illegitimacy that is the Constituent Assembly, the regime finds itself in its weakest position to date.

It’s just a matter of days or weeks until Venezuela becomes a North Korean replica ― but in the tropics and with the largest oil reserves. The vast majority of Venezuelans, heroically fighting every day since April of this year, will not stop protesting until they see a democratic government in place. If the world does not act fact, violence could rise to levels never before seen in the country and force a million or more refugees to seek asylum in neighboring countries and beyond. Drug trafficking links in the government already represent a clear security threat in the region. It’s past the time for the international community to act. The world needs to move now before the situation spirals into a failed state. 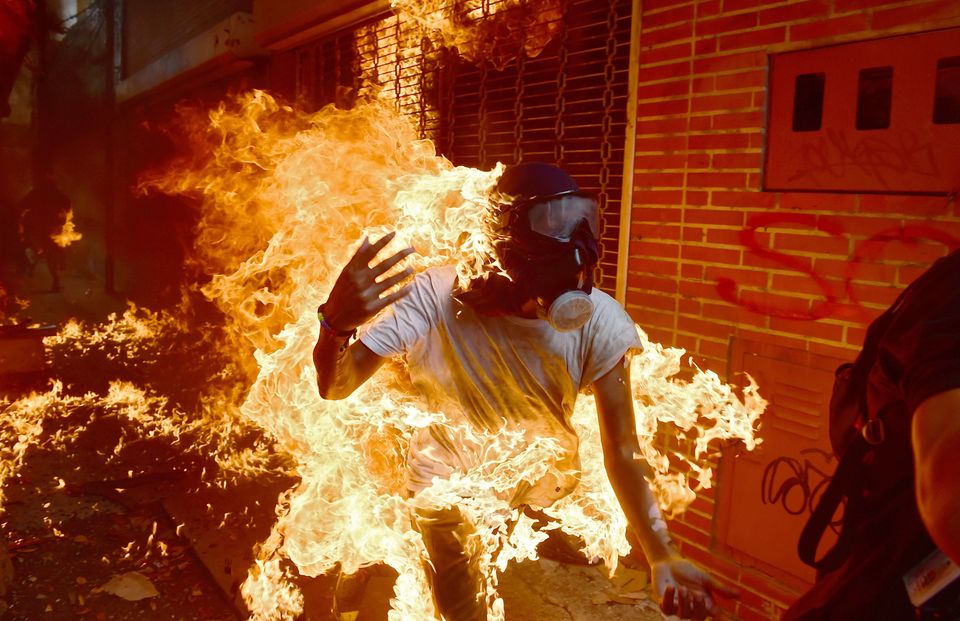 1 / 25
A demonstrator catches fire during clashes with riot police on May 3, 2017. Protests against the government of beleaguered leftist President Nicolas Maduro have wracked Venezuela for months.
RONALDO SCHEMIDT via Getty Images