BARCELONA, Venezuela, July 13 (Reuters) - Hailing his rebound from cancer as a "miracle" and firing up his supporters with spiritual rhetoric, Venezuela's President Hugo Chavez has hit the road to campaign for re-election in October.

The socialist leader began a series of campaign rallies under a rainstorm in the eastern city of Barcelona, seeking to show his health is fine and to capitalize on the emotional connection with Venezuela's poor that has underpinned his rule.

"I'm in the street again, thank God, after everything that's happened in the last year. It's a miracle!" he roared to tens of thousands of supporters on Thursday night in the first of a series of planned appearances round the nation.

"The Bolivarian hurricane is back!" Chavez added to thunderous applause, referring to South American independence hero Simon Bolivar whose ideals - and persona - he has sought to adopt.

Though Chavez has said he is completely cured of cancer after three operations in Cuba over the last year to remove two malignant tumors in the pelvic area, doubts persist.

Doctors say it is impossible to be declared cancer-free until two years have passed with no recurrence.

And while the 57-year-old is clearly enjoying a surge of energy, he is nowhere near his famous hands-on style of street politics where he would dive into crowds, play sport in villages, and endlessly hug mothers and children.

At Thursday night's rally, Chavez rode on a truck, blowing kisses and placing his hand on heart, rather than walk through the crowds. He walked gingerly on stage, then visibly tired towards the end of an initially storming two-hour stump speech.

At one point, Chavez said he had been passed a note by aides telling him he had spoken for too long - and irritably said he would continue.

For supporters, simply seeing him in the flesh was enough. Many had waited under the downpour for his triumphant appearance atop a vehicle decked in party colors and emblazoned with his slogan: "Chavez, heart of my fatherland".

"When my eyes meet with yours, we connect in the heart and soul," Chavez began his speech. "It is a connection of deep love ... When I see you, when you see me, something says to me 'Chavez, you are not Chavez, you are the people'."

Such language seems cheesy but underlines the very real, quasi-religious connection even his fiercest critics admit Chavez has with the poor majority in the South American nation of 29 million people.

Brought up in a rural shack by his grandmother, Chavez swept to power in a 1998 election projecting himself as an outsider bent on overturning decades of dominance by a rich elite.

Foes view him as a typical Latin American "caudillo," or dictatorial leader, who has wrecked the economy with nationalizations and other socialist policies.

Chavez now faces perhaps the toughest electoral challenge yet as Venezuela's hodge-podge of opposition parties have united behind a youthful former state governor, 40-year-old Henrique Capriles, who is also whipping up large crowds round the nation.

Chavez has a two-digit lead in most polls still, but aides to Capriles say his months-long, grassroots "house-by-house" tour will bear fruit soon. Some analysts say Capriles' work on the campaign trail may have rattled Chavez's team.

"The government's strategy seems to be a defensive response to Capriles' recent momentum," Barclays Capital wrote this week.

Though opponents sniped at the scores of buses used to transport Chavez supporters to the Barcelona rally, there was plenty of genuine euphoria on display.

'YOU ARE CHAVEZ TOO'

A young singer from the plains where Chavez was born, in white suit and cowboy hat, exhorted the crowd: "Cheer so they can hear you in Caracas!"

A clown on stilts wobbled through the good-natured throng, waving a homemade sign that read: "Socialism is life."

Soldiers handed out balloons emblazoned with Chavez's campaign logo as loudspeakers pumped out music from his latest TV ad, supporters singing along at the top of their voices: "Chavez will continue!"

Barcelona is the capital of Anzoategui state, one of Venezuela's most important oil-producing regions.

But it has not been spared the power cuts that have affected much of the country in recent years - which critics say are just another sign of government mismanagement - and big generators were set up behind the stage for Chavez's appearance.

In a speech that traced his history from a subversive lieutenant starting his "revolutionary" movement within the army, to a failed coup against him in 2002, and then this year's campaign, the president employed his usual mix of combative rhetoric and soft affection for the masses.

Wearing his trademark red military beret, Chavez slammed his rivals as "traitors" and he chastised the mayor of Barcelona for poor roads.

"Chavez is the fatherland!" he said, repeatedly returning to the theme of his love for Venezuela's long-marginalized working classes - the centerpiece of his re-election strategy.

"When I see you, I feel myself made flesh in you. You are also Chavez, each young Venezuelan, each worker, each grandparent. You are all Chavez!" (Additional reporting by Deisy Buitrago; Editing by Andrew Cawthorne, Kieran Murray and Vicki Allen) 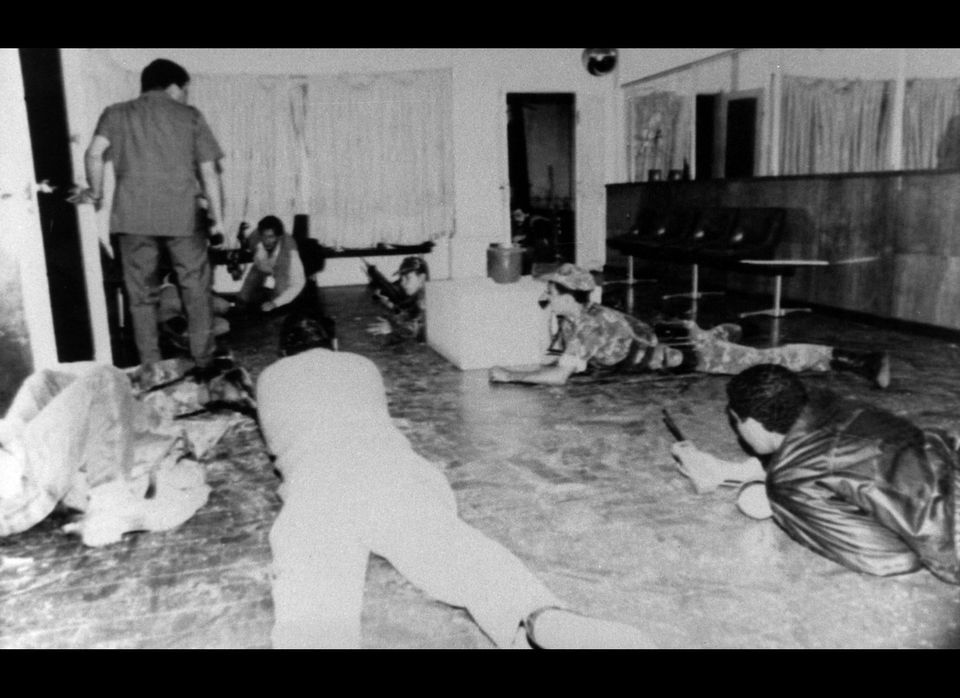