For the past month, Venice, Italy, bathed in splendorous sun-soaked weather, hosted the 9th International Contemporary Dance Festival as part of the performance arm of one of the world's oldest contemporary art exhibitions, the Venice Biennale. We attended the Festival second week, imbibing many, many cool dance performances with deep layers of pleasure. We ricocheted, as arts consumers, between the theatrical happenings and the drama of the city itself -- a breathing urban-organism of art and architecture. Some dance performances were successful; others less so. But what is for sure is that every step of Biennale Dance 2014 was most professionally presented in Venice's glorious performing arenas -- theaters, black boxes, alternative spaces any of which London, Paris, or New York would salivate for. When the Festival's theaters were fully booked, out into the street poured dance, invading Venice's many campi and piazzas. 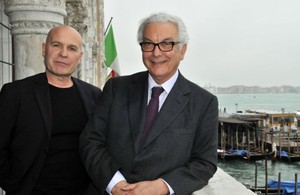 Curator Virgilio Sieni (at right with Biennale director Paolo Baratta), a respected choreographer and leading figure in Italian contemporary dance, assembled an impressive roster of 30 invited choreographers and dance companies for the festival's 42 productions, 28 of which were premieres.

Many participants were Italian, but guest artists piled into Italy from Japan, France, Belgium, Spain, Norway, Israel and only a sprinkling from the US. "The theme is born of the possibility of renewal of community through the body itself, through its ability to move, practice and observe," wrote Sieni in an email, signaling a return to humanist expression for dance.

The coup of the Biennale Dance 2014 was its honoring of modern dancer Steve Paxton. The Golden Lion for Lifetime Achievement in Dance went to the American, who is a surviving member of '60s Judson Church post-modern dance experimentation and a pioneer in contact improvisation.

His work "Bound" (1982) was restaged with Jurij Konjar dancing Paxton's original role. Those who witnessed the performance were thunderstruck by the experience. In the lobby of Ca' Giustanian, the Festival's headquarters locale, three videos containing precious capture of Paxton, in 1992, brilliantly improvising to the Glenn Gould recording of Bach's "Goldberg Variations" looped round. The dancer's nobility, his invention and exceptional physical genius in digging into the crannies of Bach's score -- his wriggling body sensitively echoing Gould's quicksilver playing -- brought a deep emotional response. The Biennale Silver Lion award went to Italian, Michele Di Stefano of the mk company, a devilish choreographer who was a pleasing presence in and around the festival, presenting several works. 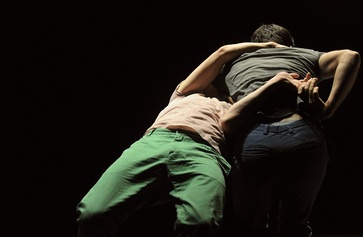 French choreographer Jérôme Bel's "Senza titolo," was staged at Palazzo Grassi fitting with the choreographer's distinctive ironical tone, his highlighting of the banal, his walking the fine line between performance and reality. The Israeli Roy Assaf delivered two strenuous works, "The Hill," for three men, concerning the Arab-Israeli conflict, now dismally reignited, and "Six Years Later" concerning a more universal conflict, that of a long-term couple in close-range relationship struggle. 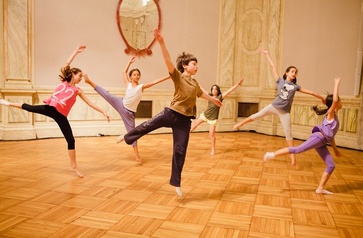 Christina Rizzo (not to be confused with the French dance maker Christian Rizzo), considered as one of Italy's most interesting young choreographers, contributed "Bolero," choreographed as part of "Vita Novo," a dance-education arm of the festival engaging young children. "Bolero" was staged in the impeccably bright and clean column-studded Salla Della Colonne space at Ca' Guistinian. Ravel's music, which when blasted on a really good sound system will stand your hair on end, contrasted beautifully with the children's studied composure pacing through Rizzo's simple dance phrases (walks and runs, a front whipping turn, twitching leg movements), all delivered with breezy insouciance that gained in intensity as the marvelous music ramped up.

A crisp winner was a smart, beautifully shaped work by Italian dance maker Marina Giovannini, pictured at top of page. A tight ensemble of four female dancers posed and gesticulated as lovely Venetian statuary sprung to life, placing themselves onto display, sometimes in contact with moveable props, sometimes constrained by contact with each other. Balance was the central metaphor of "Meditation"'s wry second section in which three dancers entered the performance space clinging to -- of all unusual props in the dance world -- basketballs. But rather than dribble and shoot, the women, garbed in chic black-and-white dance gear, set themselves to a simple but ponderous task: balancing the basketballs on their foreheads, heads cocked, arms splayed like broken scarecrows.

High atop Venice's Music Conservatory, a dinosaur-wreck of an 18th century building with splendid city views, spooled Alessandro Sciarroni's witty "You Don't Know how Lucky You Are." A troupe of non-trained dancers, gathered in a giant ring, performed simple jumps and leaps with rhythms overlapping, accruing complexity and difficulty over time.

Virgilio Sieni's "Indigene - prima parte," another product of the Festival's "Vita Nova" theme, was created for three nubile young women, girls, in fact, age 15. The work featured polished Merce Cunningham-influenced use of space, and a live chamber-music score by Giovanni Dario Manzini. The dancers, their hair bound in tight ponytails and wearing little undergarments and bare legs, grappled admirably. The mature tonality and sophisticated and cool body language seemed slightly out of their reach. I had strongly mixed feelings about to process the children's performances as a critic. As "mini-me's"? As kid recitals? The works were very well received by the predominantly Italian audiences. 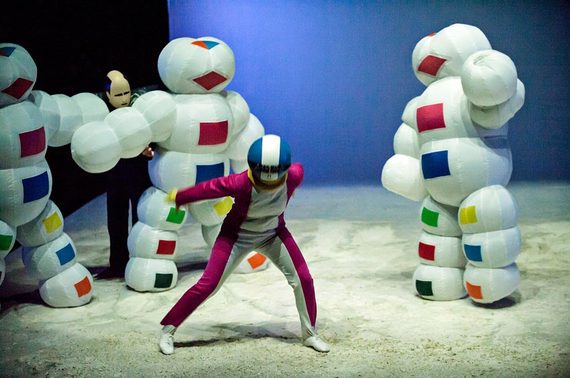 The find of the Festival was "Marzo," choreographer Dewey Dell's colorful, funny and absurd Italo-Japanese 'manga' comic book sprung to life. "Marzo" mixes the sensibility of the drama's hero, a samurai (wonderfully danced by Dell herself) with that of extraordinarily beautiful comic-book 3-D puppets. An enveloping sound score credited to Black Fanfare / Demetrio Castellucci pummeled the ears with a ballistic, electronic sound track. I loved "Marzo"'s hip music, its cool white framing shell, and its vivid costumes by Yuichi Yokoyama.

A weak entry was French dance maker Christian Rizzo's "D'apres une histoire vraie," created with a nod to Turkish folk dance and exploring the "memory of gestures," so said the program note. The listless and unbearably dark work spooled before two huge drum sets on an elevated platform. "D'apres.." featured a gaggle of men, trained neither in contemporary dance nor, really, in folk dance, galoomphing the stage. The interminable, weird work strained the eye not only due to the absence of lighting design (the stage was a big black hole) but also because its cast, resembling an unkempt motorcycle gang, was not a pleasure to behold. Even after seventy minutes, there was little clue who the men were meant to be as they clasped hands, dipped rhythmically from side to side doing the daisy chain. One drama had a dancer lifted, as though a dead body, by others. Beyond that: utter mystery, torture! I fled once it was over; it got a standing ovation. 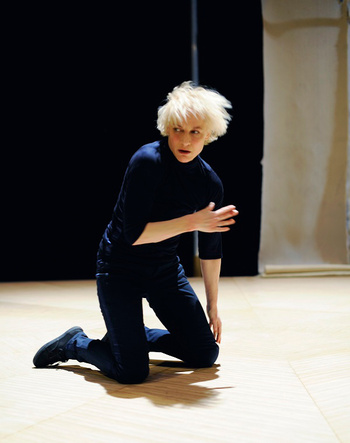 Berlin-based high priestess of performance art, Meg Stuart, had it going on in her extended solo outing, "Hunter," one of the Festival's most anticipated performances given prime viewing slot on Saturday night. A hugely intense performer, Stuart held up well, delivering her house-style of female brutalism with rigor and high concentration.

For a good sixty minutes, Stuart reigned solo in the incredibly beautiful Teatro Alla Tese at the Arsenale, circling the stage, her wild motoring arms active, her visage alive. I find her tough-girl persona intriguing if a bit rough-hewn, her face a smear that rapidly morphs to a pout. Beneath her endearingly messy crop of blonde hair, her head and face traverse flighty emotional vicissitudes, first joy, then sorrow, then anger, then paranoia. Performing to a music pastiche (a barking dog, then, at one point a voice queried, "When do you start trusting someone?") before cool and complicated video projections (one shows Stuart beaten up, with a black eye), she projects sincere emotional damage. In "Hunter" she paraded first in black, then in a clown-crazy oversized dress with penile underpinnings (this was amazing) and then in jeans and filmy blouson. Then she was topless. I find her brave and unconventional, but admit to disappointment over the talking-coda with which she capped her bravura evening. So regrettable.