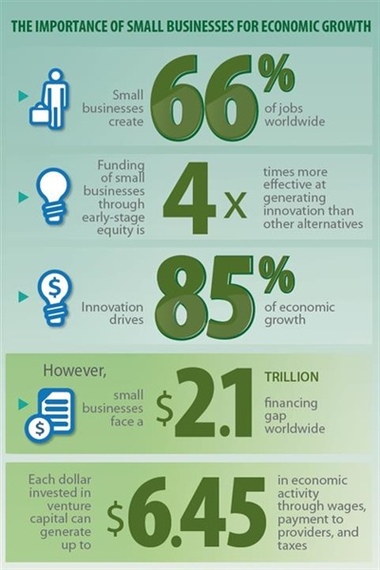 Yuri Soares is chief of the Climate-Smart Agriculture unit at the Multilateral Investment Fund. He has a PhD in economics from Michigan State University and a master's degree in agricultural economics from the University of Florida. He has worked in the United States and Brazil.

Startups and scale-ups create the vast majority of jobs in the formal economy, providing, on average, 66 percent of jobs worldwide and the greatest share of jobs in low-income countries. Moreover, small and medium-sized enterprises are important not just for job creation, but also for economic growth, thanks to their outstanding capacity to increase productivity through innovation.

Looking back, some 85 percent of growth between 1900 and 1950 is attributable to innovation, rather than increased usage of inputs. As for generating innovation, financing of small businesses via risk capital--most notably venture capital, which is also called smart capital because it combines financing with active hands-on support--has been found to be three to four times more effective than other alternatives, such as corporate research or development funding.

However, young companies with business models that aren't fully proven, or those that haven't reached break even, often have difficulty accessing funding. It is estimated that they face a financing gap of more than $2.1 trillion worldwide, and that bank loans to small businesses represent only 3 percent of gross domestic product in emerging market countries.

Each dollar invested in venture capital can generate up to $6.45 in economic activity through wages, payment to providers and taxes, according to a 2012 study by Dalberg Global Development Advisors of the venture capital portfolio of the Inter-American Development Bank's Multilateral Investment Fund (MIF), which operates in Latin America and the Caribbean.

Another study, Impact of Early Stage Equity Funds in Latin America, conducted by Bella Research Group in 2016 of three funds supported by the MIF, produced similar results. It found that venture capital investments can be very effective in fostering economic development, producing both direct and indirect impacts. In particular, venture capital funds can provide vital funding in equity- and credit-constrained environments, and they usually offer substantial networking opportunities and business training to the companies in their portfolios.

Moreover, the Bella Research study also found that venture capital funds often generate benefits in the communities in which they operate, nourishing ancillary growth and job creation, providing sustainable market-based solutions for the poorest people, and strengthening the innovation and entrepreneurial ecosystems.

Susana García-Robles leads the Early-Stage Equity Group at the Multilateral Investment Fund. Since 1999, she has worked on advancing entrepreneurial and innovation ecosystems and the venture capital industry in Latin America and the Caribbean, to spur economic development in the region.

Sandro Díez-Amigo is a senior economist consultant at the Multilateral Investment Fund, specializing in experimental research. He has a PhD in economics from the Massachusetts Institute of Technology, and has worked in Chile, Ghana, Indonesia, France, Spain, and the United States.