What are those two bright stars on the West after sunset? They are actually planets, Venus and Jupiter coming into conjunction, in other words, near each other as seen from Earth. 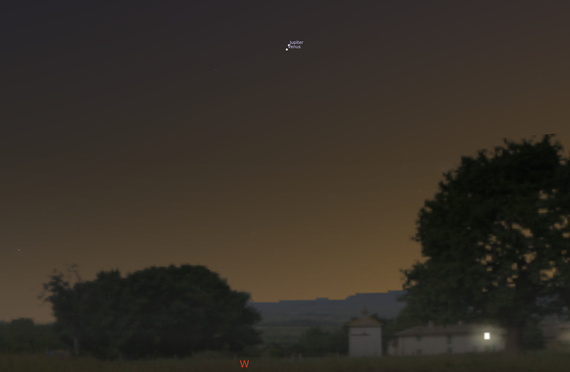 Both planets have been slowly moving closer during June for this particular show. June 30th is the best day to see them half an hour after sunset. They will be merely 1/3 of a degree apart, that is, a rollerball pen's width at arm's length. A similar event won't happen until the year 2023, so be sure to take a couple of minutes of your time to see this stunning celestial event. NASA has simulated how it will look in a very informative video:
https://www.youtube.com/watch?t=63&v=_ppuCZR8Mkw

Although they might seem very close to each other from Earth, they are actually very spaced apart. Millions of miles separate them from us and from themselves; Venus will be 47 million miles away from our planet tonight and Jupiter will be twelve times as distant, at 564 million miles.

Venus, because it is closer to the Sun and to us, will be shining 7 times as bright and as Jupiter and will be the closest of the two to the horizon. Because of their proper movement the planets will start to drift apart starting on July 1st, and moving closer to the horizon earlier in the day.

It is probably a good time to review a little about both planets. Venus is very similar to Earth in terms of size; it's a rocky body just 400 miles smaller in diameter than our planet. Its surface is always covered by dense clouds, which makes it impossible for us to study its physical characteristics without the use of radar technology that penetrates through the clouds, bounces on the surface, and brings back details to orbiting spacecraft. It is also the hottest surface in the solar system due to a green house effect caused by the clouds, which allow for heat to go in, but not out of the dense atmosphere. Temperatures in Venus can reach up to 850 degrees Fahrenheit. Jupiter, on the other side, is mostly made out of gas (hydrogen and helium). The gaseous planet is the biggest in our solar system and 11 times as big as the Earth, in terms of diameter. It has 67 moons orbiting around it, some of which are good candidates to harbor life in subsurface oceans. The Great Red Spot is a huge vortex on the upper atmosphere of Jupiter, an extraterrestrial hurricane if you wish. It is nearly two times the size of Earth and was first recorded in 1831, but might have first been spotted since 1665. It presently is shrinking in size, but planetary scientists are still trying to explain the longevity of this particular storm.

Conjunctions have no repercussions on our planet, they are merely celestial eye candy. Although visible with the naked eye, if you own a pair of binoculars or a small telescope, be sure to take a look, you will surely be rewarded.