I'm 13, maybe 12, sitting on my parents' bed surrounded by a bevy of photo albums. The pictures and the lives they depict are in varying states of fray. A young woman appears throughout the catalogs; a bombshell of a girl captured at fleeting moments. She has dark hair and her skin is stripped of color by camera flash, leaving the outlines of her visage -- a stripe of eyeliner here, a pronounced cheekbone there -- stark against her face. She is tall. Slim. Well-dressed. Never without makeup.

The more I scan the albums the more I am taken by her appearance. Here she is modeling a form-fitting outfit. Here she is laughing with her husband, holding up a champagne flute to his mug of beer. Their body types are similarly juxtaposed. Here she is, annoyed. Amused. Bored. Silly. All but indisputably beautiful.

I would return to these collections again and again over the years, forever entranced by the woman with the raven hair. For much of my life I longed for her features as girls do the bodies of starlets and models. The only difference being, this was my mom.

Two things Mama made patently clear to me growing up was that she takes pride in her looks very much, and that she longs dearly for the Good Old Days. "Ah, to be 18 again," was a phrase I heard a lot; a pipe dream she'd allude to often, fittingly, between drags of a cigarette. Gesturing at her tummy, she'd recite the Russian aphorism: 'Eto ot lyet, nye ot kotlyet!' 'This is from the years, not from the cutlets!' as if to lament, 'I am a victim of age and its cruel agenda.' Really, a victim of her discontent.

Mama and her mother-in-law, my plucky Baba from Belarus, are storied matrons of my family -- storied in part for their epic disputes, which have weathered the decades. Both women are identifiable by trademark looks alone: Mama, the smokey-eyed willow in tall boots and black leather; Baba, tan and stocky, all florals and prints with lips of fuchsia and a long, brown ponytail perched at the top of her head. Their polarized styles are apt representations of personality, and neither woman has changed her hairdo for the better part of thirty years. But despite clashing personalities and notions of homemaking (Baba still stands convinced my mother can't boil a pot of water), they could always agree on matters of utmost importance: politics, moral principle, and the Importance of Being Attractive. 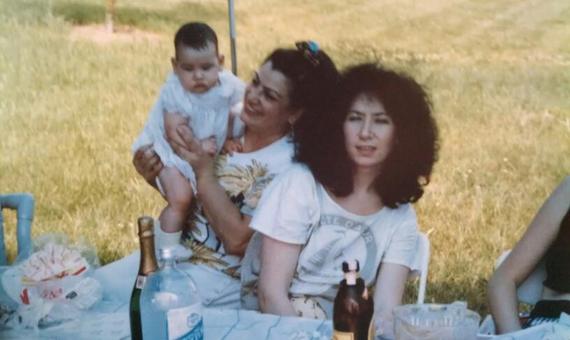 I learned early on that sexiness is next to godliness. Eastern European women have turned preening into something of an Olympic sport, though the women in my family are, by and large, low-maintenance. Still, the emphasis on beauty was profound.

"Your grandmother was a looker," I heard time and again, often in regards to the fact that I inherited my father's build and countenance, which he inherited from his mother -- my Baba. "You are definitely a Shokin," Mama insisted, referring to the shoulders, hair, and eyes most certainly not derived from her Ukrainian Jewish lineage.

And this I resented. Shokin features, as manifested in my teenage self, were homely at best and nothing short of awkward the rest of the time. I wanted the raven hair, the green eyes, the slight ankles and the narrow frame. What a cruel rendering of genetics, I thought.

With age, I decided to take matters into my own hands. I took to preening and dieting, gazing at mirrors, applying makeup and prodding body parts ad nauseum. Facebook became a favorite pastime as a controlled means of public display, and the cascades of tagged pictures lent themselves to merciless self-scrutiny. Clearly, I had inherited the obsession that consumed some of the strongest women I knew, and it ate away at me -- day after day, year after year.

Just like my mother and grandmother, I find myself shying away from cameras when my face is makeup-free. This fixation is unsettling, even crippling at times, and though I recognize the absurdity I'm powerless against it. As easy as it is to poke fun at women who are slaves to beauty treatments and plastic surgery, part of me can only empathize. Vanity is a trap and, confidence be damned, we're at its mercy.

When I was younger, I was a spitting image of my grandmother. Today, I look more like my mom. In a sad kind of irony, Mama tells me she wishes she had my shoulders and chin. I honestly don't know what's more insidious -- the beauty campaigns we are regularly subjected to, or the beauty myths we perpetuate ourselves.

I just wish they could see past the stigma of age and see their loveliness as clearly as I do. We should rejoice in ourselves, not our self-image, and curse delusions of the looking glass.