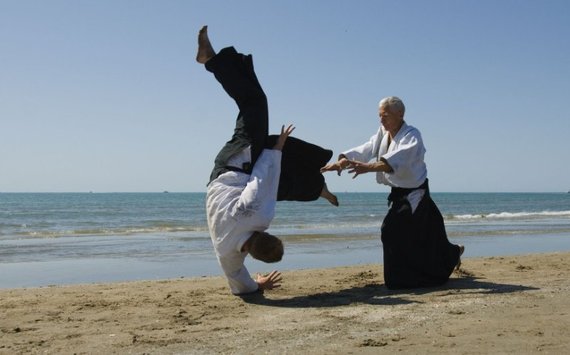 "Aikido, said its founder, is the art of reconciliation. Whoever has the mind to fight has broken his connection with the universe. If you try to dominate other people, you are already defeated. We study how to resolve conflict, not how to start it. "
-- Terry Dobson

"What a stupid idea!" your colleague bursts out. "It will never work."

How can you respond?

Say, "You are wrong," and you escalate the conflict.

Say, "I am wrong," and you betray yourself.

Your colleague must have not read my previous post about humility. Or if he did, he must have been the one who commented that it was a stupid article.

Here are a several ways to deal with criticism.

An Ounce of Prevention

The only way to win a fight with a colleague is not to have it. Beating him will get you, at best, a defeated resentful opponent.

Here are four general strategies that reduce conflicts. They don't guarantee you will avoid them, but minimize their probability.

Should they happen, they increase your odds of resolving them constructively. They create a positive predisposition towards collaborative relationships.

These strategies are not "nice" in the sense that they allow anybody to state whatever opinion they want. They are "clarifying" in the sense they eliminate the fog of war that prevents rational discussion. They are rules of engagement similar to the ones of the scientific method, which focus on reason and evidence. They take hostility out of the equation, allowing for a logical consideration of the different points of view.

1. Speak with humility. Present your argument in safe language, as I described here. Own your opinions. Present them in first person as the conclusion of your reasoning process. This gives others the chance to present a different opinion without clashing with yours. For example, when you say, "In light of the evidence from the focus groups, I believe that the marketing campaign is ready to launch." you make room for your counterpart to say, "I disagree. The focus groups may have liked the ads, but our retailers are not convinced."

2. Listen with respect. Pay attention to others' arguments, as I described here, especially when you disagree with them. Reciprocity is the most powerful influence you can exert. If you genuinely try to understand their perspective, they are more likely to try to understand yours. For example, when you say, "It worries me that the retailers are not convinced, what do you suggest we do about it?" you neither discount his data nor yours. This allows both of you to examine all perspectives.

3. Choose your battle. If the disagreement is a matter of personal preferences, there is no need to agree. It is futile to argue whether chocolate "tastes" better than strawberry. It may taste better to you, and it may taste worse to him. Unless a joint decision is necessary, it is best to agree to disagree. The desire to "be right" fuels fights that serve no practical purpose.

4. Choose your battlefield. Culture can be defined as "the way we do things around here". If you live in a culture where might makes right, your humility and respect will weaken you. Bullies will always win out in bully-land. Or at least until the group is eliminated by fitter competitors. Reason always beats force in the long term. If you don´t want to go the way of the dinosaurs, evolve to a more rational niche.

In spite of your preventative actions, you may need to face an arrogant attack. It`s time to apply verbal aikido.

A Pound of Cure

If someone pushes you, what do you feel like doing?

If you push back, what does she feel like doing?

She pushes, you push back, she pushes harder, you push back harder. You are both stuck in an escalating conflict. You are wasting tremendous energy trying to overcome the other's "resistance" while going nowhere. Talk about inefficiency!

There are three steps to transform this kind of fight into a dance. When you challenger pushes you,

2. Blend. Join her in a positive intention. Stand by her, looking in the same direction to see what she sees. For example, you could declare, "I want to correct any errors I am making," or "I want to find what would work," or "I want to take advantage of the opportunity as well."

3. Extend. Inquire about the reasoning that leads her to her conclusion. "I hear what you think," you can reassure her as you summarize her view. Followed by, "I want to understand also why you think what you think. Can you explain it to me?" For example, you can ask, "Where do you think I am wrong? Am I using wrong data, incorrect assumptions, or illogical inferences?" or "What makes you think it won't work? What negative consequences do you foresee if we try it? What do you suggest we do instead?"

If she offers you a convincing argument, you can change your mind. "Thanks for correcting my calculation", you might say gracefully, "I made a mistake." Or "I thought that the risks of releasing a buggy product were too high. Your data makes me think differently now." Yes, you may lose some face if people think that proving you are right is more important than finding what is right, but as a teacher once told me, "If you want to grow, you must love the truth more than you love your face."

If you are not convinced but see that there is room for doubt, you can explain, "My opinion has not changed, but I see that you have some valid points I need to consider. Let´s think of how we could move forward in a way that works for both of us."

If you think the other's objection is ungrounded, you might counter, "I don´t understand how you reach your conclusion. I see why the course of action I suggest is not convenient to you, but it still seems to me the best alternative for the company. What is the benefit for the company of releasing a beta version rather than waiting for the QA engineers to finish their job?"

These ideas are common sense, but not common practice. The difficulty is not intellectual but emotional. Like a martial art, knowing does not come from reading but from practicing. The good news is that you live in the dojo.

In the following two videos you can see a masterful demonstration of verbal aikido by Henry Fonda in 12 Angry Men:

Readers: What critical attacks you have experienced at work, and how have you responded?