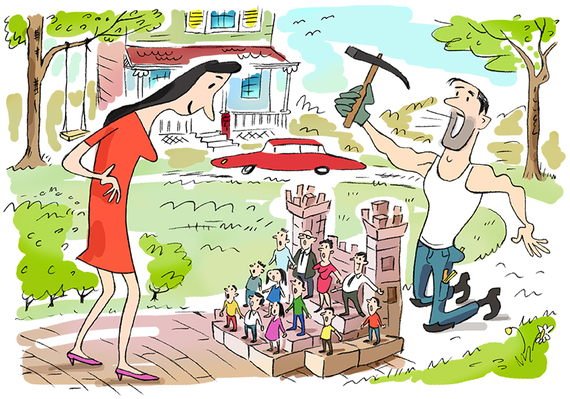 Were you born here?" I ask Michael, the stonemason who repairs the flagstones along my driveway. They are in shambles because of the constant freezing, thawing and refreezing in recent weeks. He looks Italian, with his strong profile and dark black hair. And I've noticed that he has a faint Italian accent.

Of course! he tells me. He was born and raised here. But then, he says, his family is actually from a small mountain village in Italy, named Pettoranello del Molise. "Like ten percent of all people in Princeton," he adds.

What? Ten percent of people in this Ivy League town are descended from a little village in the middle of Italy?

Then I remember that I often see many Italian names in Princeton -- the names on the front of shops, in the phone book, in the schools.

"Yes, and many of them were bricklayers and stonemasons, like me," Michael says as he slices off a corner of a stone with a chisel. "My family single-handedly built the university. Brick by brick."

Beginning around 1860, a large part of an Italian medieval village was shipped to build the fake Gothic towers on Princeton's campus, including the spires and carved gargoyles. For that purpose, the local quarries had to be mined. Who could do this? Princeton was looking for people with experience -- and found them in Italy.

Many of the immigrants settled in what we call the "tree streets" -- Spruce, Chestnut, Linden Lane. Princeton's own Little Italy, not far from the Catholic church. They include Bert, the barber who has been cutting my neighbor's hair for over 40 years, and the owner of the Italian supermarket where I like to buy my ravioli, pesto, tiramisu and biscotti, all homemade. And those cute bottles of Limoncello. And most of the stone masons, of course.

Pettoranello is a sister city of Princeton. Even though only a few hundred people live there now, the two cities have regularly exchanged students and high-school sports teams. "Years ago, when my son was singing in the choir, I went along with him to Pettoranello," says my mason. "There is no hotel in the village, so we stayed in a motel in the valley. It had a beautiful marble floor, more polished and gleaming than the most expensive hotels in New York. All handcrafted, of course. The day of the concert we took a bus up to the church, where our choir would sing. Many of these kids in the high-school choir have the same last names as the children in Pettoranello. There stood my little boy, handsome in a white shirt with a tie. Because he is so small, he stood in the front row. Our choir director chose to sing a song he knew the Italian families would love: Va Pensiero, the chorus of the Hebrew slaves from Verdi's opera Nabucco."

"And you know what happened then?" Michael asks me. "When the song began, the Italian parents next to me began humming softly, then louder and louder, and they sang along with the choir from beginning to end."

He suddenly looks at me.

Before I can answer he starts to sing to me. His chisel waving in his hand like a baton. Deeply moved, I listen to this song, sung so beautifully by the stone mason standing on my driveway.

It's a story of homesickness. Of the Jews expelled from their country by the Babylonian king. Of Italians who 150 years ago left their mountain village, crossed an ocean, and built a new life here between the medieval towers that made them think of home. The song says:

"Hasten thoughts on golden wings.
Hasten and rest on the densely wooded hills,
where warm and fragrant and soft
are the gentle breezes of our native land!"