A new Verizon commercial cites a sad statistic by the National Science Foundation: 66 percent of 4th grade girls say they like science and math, but only 18 percent of all college engineering majors are female.

People have offered many potential explanations for this discrepancy, but this ad highlights the importance of the social cues that push girls away from math and science in their earliest childhood years.

The video depicts one girl's development from toddler to teenager. She wanders curiously through nature, examines the plants and animals around her, creates an astronomy project, and builds a rocket with her older brother. But all along the way, she hears many all-too-common refrains from her parents: "Who's my pretty girl?" "Don't get your dress dirty," "You don't want to mess with that," and "Be careful with that. Why don't you hand that to your brother?" These statements are subtle, but the ad suggests that they can ultimately discourage girls from pursuing traditionally male-dominated STEM subjects in school.

According to AdWeek, the powerful commercial is the result of a partnership between Verizon and Makers and is narrated by Girls Who Code founder, Reshma Saujani.

The video ends with a thought-provoking question: Isn't it time we told her she's pretty brilliant, too?

PHOTO GALLERY
Girls in STEM By the Numbers 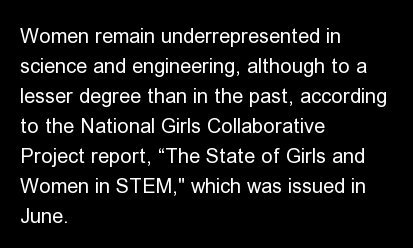 1 / 7
Women remain underrepresented in science and engineering, although to a lesser degree than in the past, according to the National Girls Collaborative Project report, “The State of Girls and Women in STEM," which was issued in June.