I didn't know I was so popular until Verizon filed a 'me-too' objection with the FCC to block my viewing of the recently compiled 'special access' data.

Last week, AT&T started the trend with the first request to the FCC.

What are these companies afraid of? 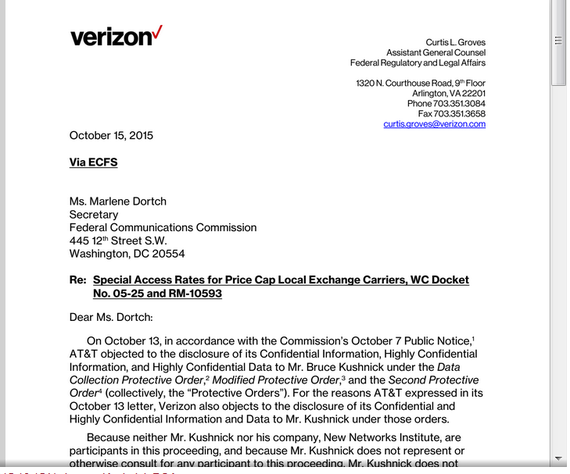 We Filed a Response to the Opposition.

As one of our lawyers wrote:

"New Networks Institute (NNI) wants to bring a leash to the industry's dog party to prevent these players from biting their customers (including NNI and its members), and has every right to do so. NNI most certainly has "administrative standing" to participate as a party." 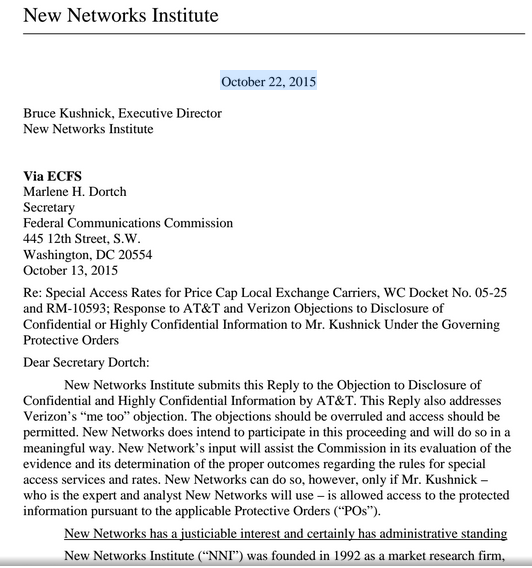 Now, seeing the special access data requires a signed letter of confidentiality, and I take these kinds of things seriously and would not reveal anything that was covered by this binding agreement. However, I assume that the two largest wireline and wireless providers in America have concerns that I would reveal competitive secrets or something questionable about their business practices... that they, of course, want hidden.

And it is a bit bizarre that both AT&T and Verizon have decided to pick on me, alone, (as far as I know) and are attempting to block my ability to see this information.

However, it would seem that AT&T and Verizon do have some things to hide. Last week the FCC also initiated an investigation into some of the special access services offered by AT&T, Verizon and Centurylink, the companies that control most of the incumbent phone company wires in America and in every state.

"By this Order, the Wireline Competition Bureau (Bureau) initiates an investigation into the terms and conditions of certain incumbent local exchange carrier (LEC) tariff pricing plans of AT&T, CenturyLink, Frontier, and Verizon for business data services (or special access services) that competitive LECs allege are unreasonable, anticompetitive, and lock up the vast majority of the demand for TDM-based business data services - assertions that the incumbent ILECs have disputed."

("ILECs" are the "Incumbent Local Exchange Companies" that control the wires of the state utility, like Verizon New York or AT&T Illinois. "Competitive LEC (CLECs)" are companies offering competitive services, and while some have their own facilities, many rely on the existing copper networks as they are restricted from using the fiber optic networks.)

As I wrote previously, in 2015, the FCC is finally making available a database of collected information about special access lines and services, which, according to the FCC, has hit $40 billion in revenues.


However, this has been a hidden network, which we now learn is worth over $40 billion, and yet there has been no data made available since 2007, even about the basics, like how many lines there are. (I note that in 2013, the FCC claimed that this was only a $12-18 billion market. Besides growth in these areas, I guess having some actual data changed their accounting.)

What makes them special, then, is not the telecommunications part of the equation, as they use and are mostly part of the regular wired utility network and access lines; their special-ness is that this class of service has been taken off of the accounting books.

And, these access lines appear to be monopoly services with obscene profits. While AT&T and Verizon et al. claim they are competitive, there's plenty of evidence that says they are not.

However, the real surprise is that we are talking about mega-bucks for copper-wire-based services. Forget about the jargon of this next quote, what it says is -- 60 percent of the $40 billion of special access revenues are still mostly based on the old copper services (DS1 and DS3).

"TDM-based business data services such as DS1 and DS3 channel terminations are the dedicated (usually copper) circuits that many business and other institutional users continue to rely on for their data and other communications needs. Despite the growth of newer technologies, preliminary analysis of the Commission's special access data collection shows that revenues from such TDM services continue to make up in the range of sixty percent of the roughly $40 billion."

A Host of Issues

How can these Services be Based on Copper Wires?

Nationwide, we now know that all of those tales about the copper-based line losses were rigged. As I previously pointed out, the accounting of lines by Verizon et al. has been to only supply one class of service, 'local phone service', which is mainly used for voice calling. This quote, based on the new findings by the FCC, claims that nationwide, about $24 billion in access lines to businesses are not only still based on the aging copper wires, but also, these access lines were NOT previously counted.

The Local Phone Networks are Profitable.

The Prices could be Highly Inflated.

This also means that special access prices charged to those who buy these services could be massively inflated -- as the copper lines were already written off, there's been little maintenance, they have been letting go of employees, and there is little or no advertising costs for basic phone service -- or for these access lines.

Finally, our research shows that the FCC's special access revenue number, $40 billion, is low and the market is probably between $50-60 billion.

The only way to prove or disprove all of this is to actually analyze the data collected and apply the insights to our existing information and see what turns up.

Though, with the attention from AT&T and Verizon, I must have found something that makes them nervous.

As we are approaching Halloween, I have only one thing to say to AT&T and Verizon, the two largest wireline and wireless companies in America -- Boo.