An ugly pattern has emerged: Phone, cable, broadband, ISP, and wireless companies, their industry associations, not to mention compromised consumer as well as astroturf groups have been on the FCC Consumer Advisory Committee (CAC) over the last decade+. In fact, many, like Verizon, have been on the Committee since its inception, 16 years ago. What's wrong with that? (Trick question). 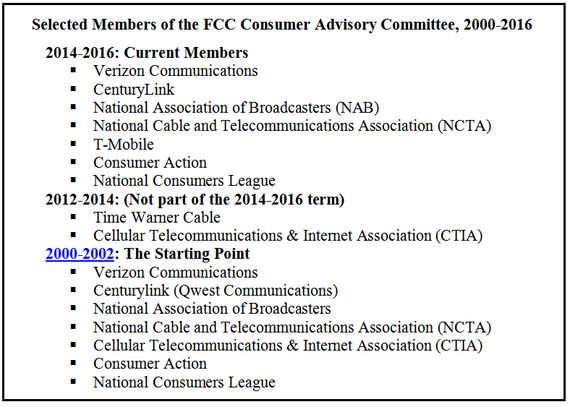 The FCC Consumer Advisory Committee is supposed to be making recommendations about consumer issues.

And in the previous article we discussed the problems with the FCC's unhealthy 'nutritional' broadband labels and pointed out that the "Internet Order" put the FCC's Consumer Advisory Committee in charge of cleaning up the broadband bills and information. Unfortunately, this Committee has been captured. Worse, the problems with the bills are being created by the very companies that somehow ended up on the CONSUMER ADVISORY COMMITTEE, such as Verizon or Centurylink, not to mention the cable companies (represented by the NCTA), and the wireless companies, represented by the CTIA, the wireless association.

In fact, Verizon, NCTA, CTIA, NAB, (the broadcast association), and Centurylink, (formerly Qwest), have been on the Committee since its inception around 2000, 16 years ago. They are not consumers; they don't represent consumers - i.e., you, dear reader.

It is time they got booted off. But that's only part of the problem.

In 2003-2004, our group, Teletruth, (now dormant) was on the Committee and I watched first hand at how corrupt the process was. We are experts in auditing communications bills and even have forensic auditors that have gotten back tens of millions of dollars in refunds from examining customers' bills and finding mistakes.

We filed multiple times at the FCC, starting in 1998, about the problems with residential and small business bills. In January 2002, we filed detailing, with examples, the following billing overcharges.

"Based upon our research obtained from auditing end user phone bills, we find that consumers remain confused about the charges listed on the phone bill, and it causes serious problems.

And in 2004, thinking that the FCC Consumer Advisory Committee would finally clean up billing, we suggested that there be a forum to examine the issues with communications bills, focusing on Verizon; we had just collected hundreds of bills and found 178 Truth-in-Billing, Truth-in-Advertising violations. Worse, over 50% of the bills had one or more mistakes, from errors in the application of taxes to customers being charged for packages they didn't order. And, we even filed with the FCC to show them where the mistakes were and how to clean up the mess, as well as how to move forward and correcting the deceptive advertising and labeling of charges, not to mention getting rid of the various made up fees.

NOTE: In 2004 and 2008 we worked with the San Diego-based consumer group, UCAN, under a grant from the California Consumer Protection Fund and found that the problems were identical in California with AT&T's bills, including local and long distance phone service as well as broadband/Internet service.

To our surprise, while the Committee agreed to do a forum, they decided we shouldn't present our new findings. So, in 2004, the FCC Consumer Advisory Committee had a panel to discuss 'Truth-in-Billing' issues, meaning the guidelines in place that are supposed to make phone bills readable and accurate. The lawyers for the USTA, a lobbying association for the phone companies, and the CTIA, the lobbying group for the wireless companies (also controlled by what is now AT&T and Verizon) spoke. They both agreed that phone bills were just fine. There was no need for any investigation or fix, and that the Truth-in-Billing 'guidelines' established by the FCC were working.

To read part of the transcript.

"USTA does believe that the guidelines are working well. Our members, which are primarily wire line local exchange carriers, are not experiencing many billing problems. But when isolated complaints do arise, they are handled."

"...we believe that the guidelines and competition have ensured that consumers have the information they need, both to make informed choices and to understand the elements of their bill."

But, it wasn't simply that Verizon and the other phone and cable companies or their associations were on the Committee and could control and manipulate the agenda. As we uncovered, the "Consumer Committee" was filed with 'astroturf groups' who were funded by the same companies that controlled the bills. In a complaint filed in 2005--(of course, ignored) we wrote:

"To make matters worse, there are also members on the Committee, such as Alliance for Public Technology, (APT) who are essentially funded by the phone companies to look like they represent consumer interests, but are more focused to help the companies' agenda. APT's sponsors are AT&T (then BellSouth, SBC, and SBC California (Pac Bell)), and Verizon. Because of mergers, this represents-- 7 different merged firms including-- Ameritech, Southwestern Bell, Pac Bell and SNET to Bell Atlantic, NYNEX and GTE."

And what was most disturbing was that there was a public affairs firm, Issue Dynamics (IDI), that had been creating/supporting these astroturf groups and had created various 'campaigns' to raise rates, such as the "CALLS" plan, or to block broadband competition, and a host of other nasty things that helped IDI's clients--not the American public.

Issue Dynamics (now Amplify Public Affairs), acted as a 'skunkworks' to coordinate and helped to fund lots of different groups and campaigns, and Sam Simon, its lead architect, was also the chairman of the National Consumer League, which had led the charge on much of this.

Probably the funniest, saddest part of this was when Sam Simon received an Ethics in Telecommunications award.

DSL Reports headline in 2009 says it all:

And it is clear from the broadband nutritional label we featured, that the current CAC isn't going to defend the public and fix what's broken. Where's the audits and investigations into the made up fees, the deceptive advertising, etc. Everyone who pays a communications bill knows something is wrong.

What should happen next is simple.

And to be very clear; the Committee also has a number of outstanding groups, associations, and individuals who should be commended. But there should be term limits on all members.

All of These Groups Should be Removed Immediately. This Is an Incomplete List.

But our take includes the conflict of interest -- the financial ties of the non-profits with the companies that the FCC regulates. How can a group take money continuously from the same companies that are raising rates or have unreadable phone bills, among other egregious acts and then complain about a lack of broadband in rural areas or that the price increases freeze out families from going online, while they claim that they care about low income families or seniors or minorities-- when they still take money from the companies instead of confronting them.

And let me be very clear-- Non-profits can take as much money as they can get from the companies for their work - all power to them. But it is not OK to be on the Committee for over a decade that is supposed to be protecting the Public Interest in communications services and yet harm those they claim to be protecting.

To show you just how sleazy this whole affair can be, check out this filed report (which was removed) on the "CALLS" Education plan--which was a plan to raise your rates - and it worked. It includes a list of the pay offs by the phone companies, all working together, to a myriad of groups--most of whom were on the original FCC CAC 2000-2002, and arranged by Simon and his cabal. For example:

"Under a grant from Verizon and SBC (now AT&T), the National Consumer League developed its website on "Understanding your Phone Bill," which was update following the Sixth Report and Order, July 2000"

"Consumer Action ("CA"): CA is a national nonprofit organization, specializing in providing information in many languages. CA is producing a new publication on reading phone bills funded by AT&T."

And they are still on the Committee, now.

The NCL is now the Chairman of the CAC. And besides being on the Committee for 16 years, the NCL also has a long history of getting money from the same telecom companies in question;

Consumer Action has also been on the Committee since its inception. Besides the ties with CALLS, over the last few years, AT&T paid Consumer Action to create a new web site and act as a cheerleader to help with AT&T failed IP Transition trials.

"To educate consumers about this transition, Consumer Action has received support from AT&T to create The New Phone Network Project."

Do we think that this group is going to defend the public against AT&T shutting off the copper or raising rates or fixing their phone bills? They have been taking money from the phone companies for at least a decade.

More Groups with Corporate Ties on the Committee

There are others who receive large sums from AT&T, Verizon et al., such as the American Foundation for the Blind-- AT&T is on the board of trustees and "Verizon Awards $1.5 Million Grant to expand American Foundation for the Blind. We didn't go through the entire 2016 member list to check, but there have been a host of other corporate funded minority, disability and consumer groups over the last decade as members of the CAC.

Then we have the "Astroturfers", sometimes referred to as "Sock Puppets". These groups are paid to create biased research for their clients on various topics that are designed to help their clients--not the public.

"Buried on page five of a PDF file describing the work of the Digital Policy Institute, one comes to a section titled, "DPI Impact and Influence." DPI doesn't list their financial supporters or partnerships as such. Instead, they call them "national, collaborative relationships." Who does DPI collaborate with?

"The American Consumer Institute...recently filed a letter with the FCC opposing reclassification, and argues that ISPs should be left alone. 'The fact is that the broadband market is competitive and becoming more so,' wrote ACI, which claims that consumers currently enjoy 'increased choice.' In January, ACI called the Verizon lawsuit that struck down the original FCC net-neutrality guidelines, 'a victory for consumers.'

"Why would a self-professed consumer advocacy group not only oppose moving toward net neutrality but claim that America's broadband market--one of the slowest, most expensive in the industrialized world with fewer than three choices in many parts of the country--is so great?

"Perhaps because ACI, like Broadband for America, is financed by an ISP lobby group. Annual tax returns show that a foundation controlled by lobbyists from the cell phone industry, called MyWireless.org, has contributed to ACI since 2010."

Because ACI is on this Committee, it is acting as a proxy for the wireless industry's wishes. Sourcewatch writes:

"Mywireless.org describes itself as 'a non-profit consumer advocacy organization giving wireless consumers a powerful and unified voice to protect the freedom, value, security and mobility they enjoy with wireless services."

There is a bottom line to this. If you think your communications bills are not 'fair and reasonable', that there is no competition and prices keep going up, and that you can't get very high speed broadband at reasonable rates, especially if you live in a rural area... well here's one place we need to clean up--to start the process to regain our communications rights.