Verizon has decided that I should not see the information recently collected by the FCC about special access services. In fact, Verizon has added us to a letter, filed with the FCC, requesting that another group, RedState, also be blocked from examining this new data. RedState describes itself as "the leading conservative, political news blog for right of center activists".

Politics aside, it's nice when others are being singled out by the phone companies...who are trying to hide the skeletons in their closets.

As discussed in a previous article, both AT&T and Verizon have previously filed against us; we have yet to hear from the FCC about their decision.

"Special Access" is not special but are the broadband and data services offered to banks, hospitals and other businesses. These are also the networks used by competitive wireless companies, which are sometimes referred to as 'backhaul'.

In this new letter, Verizon complains that I blog about 'tech policy' but didn't mention I do it at Huff Po. (Do you think that this omission has something to do with the fact that they just bought AOL, which now owns Huff Po?). However, I note -- I don't blog about tech policy; I blog about telecommunications and the phone companies, mostly.

And, of course, Verizon is selective about my bio and didn't mention that New Networks Institute has been a market research and consulting firm since 1992. Nor did Verizon bother with the detail that I have been a telecom analyst for 34 years and from 1982-1993 consulted to literally all of the phone companies that now make up Verizon and AT&T -- but why bother with facts.

Verizon also claims that, to date, we have not been a "participant" in this particular proceeding. Verizon even quotes the FCC's definition:

"Definitions: A 'Participant' is 'a person or entity that has filed, or has a good faith intention to file, material comments in this proceeding'."

Verizon will be pleased to know that we will be filing in this docket next week, calling for audits and investigations of Verizon and AT&T's communications services, which include special access. And we will be adding to the knowledge-base with new information that the FCC has never collected or examined.

Click to read the new Verizon letter, the previous Verizon and AT&T letter, and our first objection. 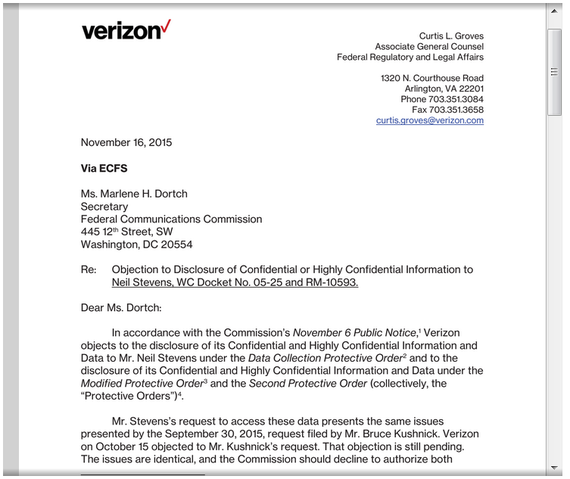