Part VII in the series based on the new report "It's All Interconnected".

In Part VI we went through a communications bill with local, long distance, DSL, Internet and web hosting and exposed that a one line Verizon New York business bill had these services being offered through five Verizon 'subsidiaries' (who, together, had been overcharging the customer by over $1000.00 a year). We also pointed out that Net Neutrality was caused by the control of the wires and services over that wire.

Over the last year, New Networks has uncovered unexamined, yet public financial reports for Verizon New York (VNY). This next chart combines Verizon New York's financial statements from different sources for the year 2009 (and I'll explain why we are using 2009 in a moment). 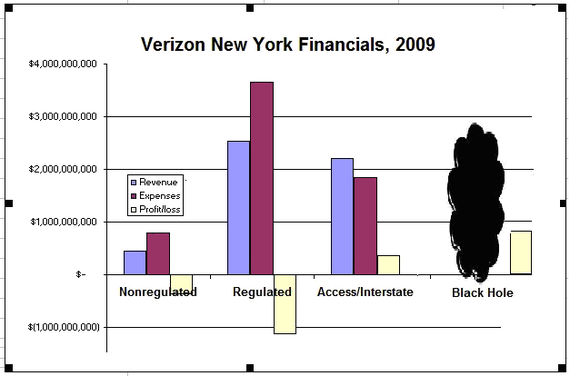 When we compared these different financial data, we uncovered that they didn't match and that the SEC-reports had major additional revenues as compared to the PSC-reports. We dubbed this 'black hole revenues'.

According to Wikipedia, a "black hole" is "defined as a region of space-time from which gravity prevents anything, including light, from escaping." In short, the term refers to an unknowable void.

But before we delve in the numbers and the flows of money, let's first summarize what we covered in this series, that is based on the new report, "It's all Interconnected", by Public Utility Law Project and written by New Networks (with assistance by David Bergmann).

Rate Increases for the "Massive Deployment of Fiber Optics' and Losses.

These increases were granted for two major reasons -- "massive deployment of fiber optics" and major losses.

VNY lost more than $11 billion over the last five years alone (2009-2013) and paid no income taxes, as well as gave Verizon Communications, the parent company, a $5 billion 'income tax benefit'. Strangely, however, Verizon Corporate's annual reports showed no overall losses for wireline revenues during this period.

And the "massive deployment of fiber optics" is for Verizon's FiOS, which is the brand name of a group of services that includes cable TV, Internet, broadband and phone services. And we outlined that these FiOS products ride over a 'Title II", common carriage, telecommunications FTTP, (Fiber-to-the-Premises), network -- i.e., this fiber network is replacing the copper wires that are part of Verizon New York, the state utility networks, sometimes called the PSTN, "Public Switched Telephone Networks".

Verizon New York Local Service Customers Paid for Most of the Construction.

However, when we examined the construction expenditures for both books they were almost identical, and this meant that all of the construction budgets were only in the regulated books and the $2.7 billion was paying no identifiable construction costs. 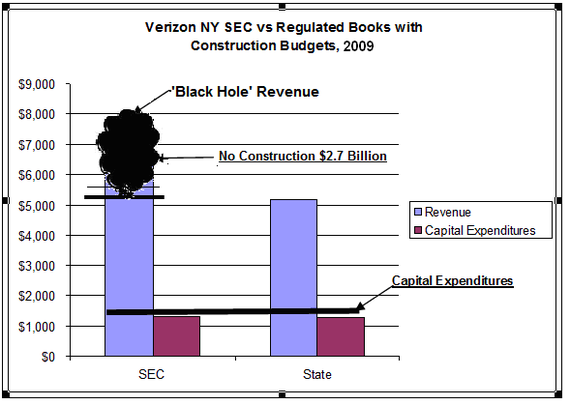 Since FiOS uses Fiber-to-the-Premises networks that are 'Title II', then it is clear that the construction is being borne by the local service customers who are still on copper-based networks.

Verizon's Affiliate Companies Are Getting a Free Ride.

Finally, if we attempt to map the charges on that bill, which included local, long distance, broadband and Internet service as well as hosting, that were offered through multiple affiliates -- Sorry to say, but only some of it is knowable. This chart compares the financial data from the PSC books for 2009 as compared to 2013, with the unknowable black hole revenues. 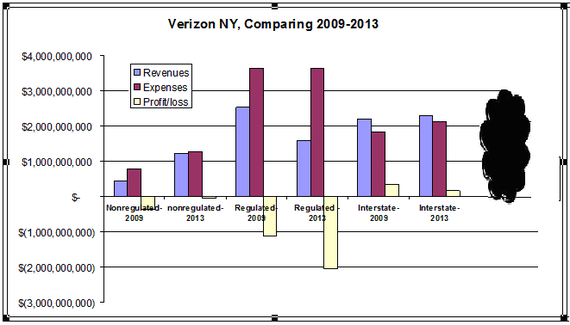 The SEC books look like regular SEC-annual reports which have revenues, expenses and profits of the business. However, the PSC-books are different as they have three major financial buckets.

e been profitable all along. In fact, in 2013, access revenues eclipsed local service and are profitable.

NOTE: These are categorized as 'interstate' and regulated by the FCC as opposed to 'intra-state' which are in-state or local revenues (and this is way too complicated to go into detail here).

What does all this mean? As far as we can tell, the revenues for Verizon's broadband, Internet and even their digital phone service, whether they are based on the copper-based networks, such as DSL, or are part of the FiOS's products, are most likely in the 'black hole' revenues or moved into the 'nonregulated' side, and these services are only paying incremental monies for the use of the networks, while some of the Fiber-to-the-Premises expenses are in the 'local service' regulated part of the business, as they are classified as 'Title II".

I.e., there are NO financial buckets in the PSC books for Internet and broadband services which are classified as 'information services' revenues, so we believe that the revenues have to be in the unknown 'black hole'-- as this is the only way that Verizon corporate's wireline networks are profitable when the local service area is hemorrhaging losses.

And this would also apply to all of the other Verizon affiliate businesses. If they have been classified as Title II, then the expenses are mostly being paid for by the local regulated side, but some, if not all of the revenues are going into the black hole.

But it is also based on our previous discussion of Time Warner's financials. Time Warner doesn't distribute the revenues from the different services evenly but keeps most of the expenses in the 'cable side' so that the other parts are paying 'incremental' revenues -- i.e., High speed data costs only $1.34 a month to offer with 97% profits, but costs the customer $34.06 a month on average.

Thus, the losses Verizon New York is showing are caused in a large part by the affiliate companies not paying their fair share back for the construction of the FTTP networks or other expenses.

We need to make something clear -- the regulators need to step up to the plate and start collecting basic information. The reason the opening chart is from 2009 is because:

And even the PSC data is still missing basic data. A simple example -- we do not know the actual number of "total lines in service" by Verizon New York or the affiliates, nor how many are copper or fiber. For example, we have no information about the 'special access' lines or other business services and the only information supplied about lines is "POTS", Plain Old Telephone Service, which represented only 15% of total access lines in New York State, based on the FCC's last data of 2007.

Before we connect all of the dots as how this relates to solving Net Neutrality, we need to explore some of the other affiliate-relationships, especially the collusion of Verizon's New York's wireline services and Verizon Wireless. And we need to address the role of the 'hidden networks', the special access wires and services.