"Regulatory Capture" is when an industry takes over the regulatory agency that is supposed to be doing oversight of the companies' business practices and is supposed to be protecting the Public Interest. The newly released report by the NY State Public Service Commission (NYPSC) "Staff Assessment of Telecommunications Services", (June, 2015) is a model of how a corrupted government agency helped Verizon (and Time Warner) get continuous rate increases, allows for egregious communications bills and deceptive marketing to be 'business as usual', covers over Verizon's failure to deliver on the commitment for 'massive deployment of fiber optics' (but charged customers over $750.00 and counting) and then claims that competition truly exists.

And to top it off, the State report claims that there has not been any major telecommunications proceedings for over a decade! (NOTE: There appears to be another name used, "The Department of Public Service", for the report.)

NOTE: The State Commission controls local service and the use of the state utility, commonly known as the Public Switched Telephone Networks, while the FCC controls 'interstate' services, i.e., services that cross-state lines. These jurisdictions and distinctions are way too complicated to discuss here.

Let's present some facts to substantiate our conclusion of regulatory capture. Here is an excerpt from the report. See anything wrong? 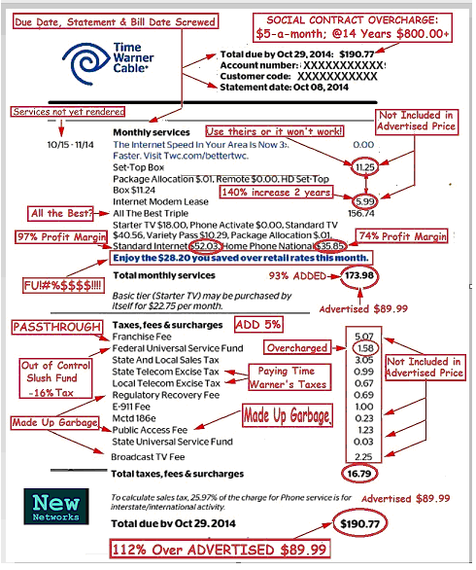 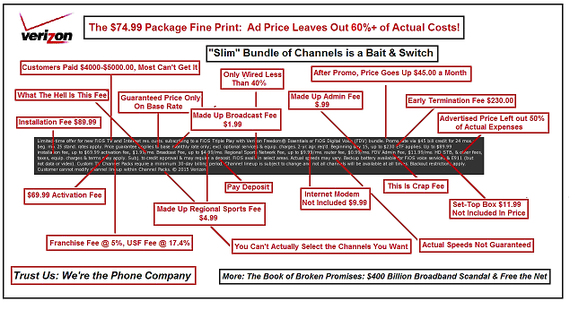 I'll go through some of the report, but let's start with these charts.

No Actual Communications Bills were Examined by the State.

As we discussed in multiple articles, customers can never, ever get the advertised price listed in the NYPSC's chart -- ever. The State didn't even bother to collect actual customer bills, nor does it detail all of the extra charges that are being applied, or the fact that the first bill's total costs comes to 30-60 percent more than the advertised price, or that the prices go up 100+ percent above the advertised price after the promotion ends. In fact, I searched the report for specific terms:

Oh, but it gets worse.

The State Never Examined or Audited the Companies' Financial Books for at Least a Decade.

The press release from the NY State Commission reveals that there have been no major telecom proceedings for a decade. But don't worry; technology changes will fix everything.

It has been almost 10 years since the Commission's last major telecommunications proceeding. In that time, the technological evolution in the communications industry has picked up pace. In fact, it appears that consumer interests have evolved dramatically with the growth of wireless smart phones, Voice over Internet Protocol (VoIP) technology and broadband services.

This Report Is Supposed to be a Factual Overview and a Foundation for Further Dialogue.

"This New York State Department of Public Service Staff (Staff) assessment provides a factual overview of the current landscape for communications in New York State, as well as a historical perspective of certain industry and consumer trends. It builds upon past efforts, and seeks to establish a foundation for further dialogue and for the State to determine whether there needs to be changes to regulation, policies and practices to ensure that the communications industry in New York is "future proofed" to meet the rapidly evolving consumer demands."

We now know that the State has been negligent in proper oversight and audits when it raised rates and didn't bother to do anything but rubber stamp Verizon's wishes.

Just how out of whack is the analysis? This next quote points out that 'local service' lost money but that there is a discrepancy because the 'non-regulated operations', like DSL, are profitable. (Note: "Intrastate" is local service.)

"The discrepancy between total company and intrastate return on equity (local service) is due, in part, because these company's investments in non-regulated operations such as DSL have been performing better than their intrastate regulated telephone business, and in some cases, earning a profit."

DSL is relatively slow broadband that is based on the old copper wires and a Verizon subsidiary has traditionally had to rent the local phone wires from Verizon New York. What we found was that the 'subsidiaries' aren't paying their fair share to use the networks, making the local phone networks look unprofitable. But, the State has never audited the 'affiliates' and if it did it would notice that the 'non-regulated' businesses are paying a fraction of all expenses-- and getting a free ride.

I.e., Verizon has been manipulating the financial books and the State hasn't bothered to audit the companies for decade.

Is it 'fair & reasonable' to raise rates 84 percent on basic service and 100-300 percent on ancillary services, considering there has been a massive reduction in actual direct expenses to offer local service? For example, Verizon no longer advertises the regular, copper-based phone service, thus lower advertising and marketing costs. Also, the company is not maintaining or investing in the copper networks, while the copper networks, on the books, are worth about $0.00 due to the continuous 'depreciation' and write offs. Prices should have plummeted and not have gone up.

So, how is it possible that local phone rates went up over 667 percent since 1980, as told by actual phone bills?

This is known as "harvesting", where a company continually raises rates to 'harvest' as much money and profits as they can from the installed base of customers until they leave or just keep paying and paying and paying.

NOTE: We could find no reference in this report that addressed these rate increases.

Investments for 'Capital Expenditures" - This Information is Pure Garbage.

Like the rest of this report, this chart, which details the investments made by Verizon as a percentage of 'operating cash flow', is all made up. It doesn't discuss the State's failure to do proper oversight and audits which allowed Verizon to divert these 'construction expenditures' to pay for the wires-to-the-cell-towers for Verizon Wireless or to fund the FiOS cable TV business.

The NY Attorney General's Office detailed that while Verizon stated the company spent over $1 billion on construction in 2011, the AG found this to be misleading as the money had been shifted to fund wireless and the cable business.

"Verizon New York's claim of making over a 'billion dollars' in 2011 capital investments to its landline network is misleading. In fact, roughly three-quarters of the money was invested in providing transport facilities to serve wireless cell sites and its FiOS offering (which is a cable service). Wireless carriers, including Verizon's affiliate Verizon Wireless, directly compete with landline telephone service and the company's FiOS is primarily a video and Internet broadband offering.

"Therefore, only a fraction of the company's capital program is dedicated to supporting and upgrading its landline telephone service. Moreover, this investment in sustaining wireline service has declined steadily even when compared to the number of telephone lines in service, such that the dollars per access line budgeted for 2012 is one-third less than the investment per line for the 2007 - 2009 period. Thus, even when one accounts for the reduced number of customer lines, Verizon has significantly cut its capital investment in its wireline business."

And we note that the declines in phone lines have been driven as much by Verizon's own major rate increases as anything else.

And the 'Operating Cash Flow?

Since none of the primary Verizon statistics used in the State report are supplied, let's examine details from the Verizon New York 2014 Annual Report, filed with the State.

In 2014, the "Net Operating Revenues" showed a $2.58 billion loss, while the "Net Operating Income" had a loss of $1.7 billion. And note that the losses are caused, in a large part, because Verizon-corporate dumped $2.6 billion of "Corporate Operations" into Verizon New York's financials.

And yet, there was no mention of this fact in the "Staff Assessment of Telecommunications Services".

The report failed to mention that much of the 'investment" was not done by Verizon corporate or investors but was from the multiple rate increases on basic residential and business local phone customers that was supposed to be used for the 'massive deployment of fiber optics'. Every phone customer was overcharged at least $750.00 through this method for network upgrades.

This report is supposed to be a "factual overview" and "seeks to establish a foundation for further dialogue".

Yes, let's dialogue. We are filing a FIOA request to find out how this abomination of research could have made it out of the Commission. We want to know who is involved. Moreover, the staffers who wrote this report should be fired immediately or else have them explain, in detail, who put them up to this. And we want an investigation conducted by the state legislature.

Why didn't the State use actual communications bills? (I note that we already submitted, multiple times, details about most of comments we just outlined. We even testified in front of the Commission in 2014 about the egregious bills in the Comcast-Time Warner Cable proposed merger.)

Also, a new report needs to be done by an independent auditing group, which tells the truth and provides facts -- using actual communications bills, surveys of customers, and audits of the companies' books, including all transactions between and among Verizon New York and all of the Verizon subsidiaries, including Verizon Wireless, Verizon Online, Verizon Business, Verizon Global, and Verizon Services -- Now.

Coda: In all of the previous articles I gave the State a free pass because I was told that there were changes afoot to move the Agency to a more enlightened, more customer-focused commission. It looks like those rumors are not true.