Verizon Wireless joined dozens of other companies last week in dumping its ads on Glenn Beck's Fox New Channel program. Due to Beck's "controversial track record," Verizon Wireless spokesman Jim Gerace told Color of Change organizers: "We made a decision that we don't want to be advertising on that program for a lot of reasons."

According to Coal Tattoo journalist Ken Ward today, Verizon Wireless spokesman Jim Gerace, "said his company simply paid $1,000 for the right to be able to sell its products at the rally." Gerace added: "It's nothing more than that ... and the groups who are trying to make it more than that are misguided. I'm definitely bothered that people are trying to put us in the middle of an argument."

Lord have mercy, Gerace is bothered?

After nearly four decades of enduring daily rounds of millions of pounds of ammonium nitrate/fuel oil explosives ripping through their communities and mountains, dealing with blasting, flyrock, silica dust, selenium pollution, contaminated watersheds and streams, entrenched poverty and a devastated economy blocked from any diversification or job development, coalfield residents are sorta bothered, too.

Perhaps Verizon Wireless customers can send around some of these photos of mountaintop removal sites and coal sludge impoundments. 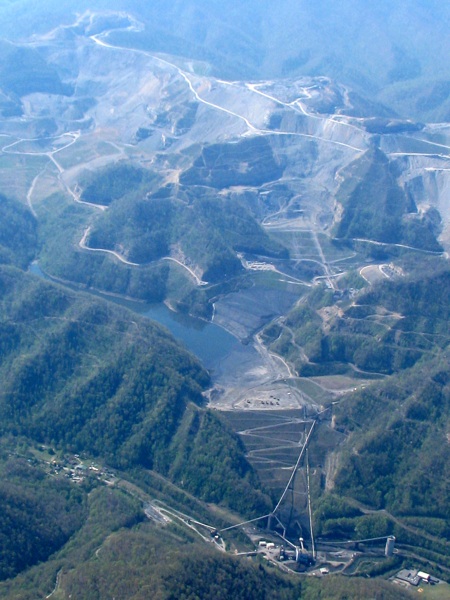 Does Gerace know that a Massey subsidiary in eastern Kentucky dumped over 300 million gallons of toxic sludge into the area's waterways and aquifers in 2000, or that Massey paid $20 million in penalties for dumping more toxic mine waste into the region's waterways in 2008; or that Massey paid a record $4.2 million for civil and criminal fines in the death of two coal miners in West Virginia? That's just for starters.

Millions of Americans, including millions of Verizon Wireless customers, are aware of the egregious human rights and environmental violations caused by mountaintop removal, which former Vice President Al Gore called a "crime, and ought to be treated as a crime."

And their outrage at Verizon Wireless's sponsorship of Massey Energy's carnival is growing.

The Center for Biological Diversity, with 250,000 members, has called on Verizon Wireless to withdraw its sponsorship or face a boycott.

Credo Mobile has started a petition to get Verizon Wireless out of bed with "anti-environment extremists."

West Virginia activists and other Southern writers have written an amazing breakdown of Verizon Wireless's "dead zone" through its sponsorship.

NRDC blogger Rob Perks has called on Verizon Wireless to hang up on climate change deniers.

The Nation magazine has issued a challenge to change service if Verizon Wireless doesn't dump its support.

Even bird societies are calling for Verizon Wireless to pull out.

Rainforest Action Network, along with many environmental and citizens organizations, have launched write-in campaigns.

Can you hear us now, Verizon Wireless?