Lowell McAdam, Verizon's CEO, spoke at a UBS investor conference, December 6th, 2016; (Transcript from Seeking Alpha). He claims that the city of Boston, Massachusetts is a model of the networks to come.

"So, if you look at Boston, and I think Boston is going to be the prototype of the architect for the networks to come... So, we'll be able to go in and offer an IPTV-based services, the streaming service, the broadband service either be a 4G advanced, or be a 5G, and I think we'll get to 5G."

If Boston is the model, then anyone who wants or expects Verizon to deploy fiber optic services to their home or office or city--in any state--should stop hoping or expecting. Worse, here's what you should expect in 2017.

Verizon told Boston that 100% would be 'upgraded' to FiOS, a fiber to the home (FTTH) service within 6 years. Now, it seems, Verizon was just kidding; it will upgrade a small part of Boston, but at the same time lay the fiber to the cell sites for wireless because it makes the company more profits. So what if wireless '5G' doesn't work yet or that this holds up most of the East Coast of America's fiber next steps for a bait-n-switch? (Verizon controls from Massachusetts through Virginia, (with a part of Connecticut).)

But, wait a second -- Who's actually paying for the wires to the cell sites used by Verizon Wireless in this bait-n-switch? I'll get back to this issue.

(Add the fact that the FCC is in transition and the transition team leader is a consultant to Verizon, there is little expectation of a federal investigation of this matter in 2017.)

I've written a series of articles about Verizon's fiber optic commitments to the citizens of Beantown, but the buzz has been everywhere.

Example: The Boston Globe wrote in April, 2016 that FiOS would be deployed to 100% of the City within six years.

"FiOS rollout in Boston could take up to 6 years

"Verizon is finally ready to offer its high-speed fiber optic service to Boston -- a victory for city officials who have long sought meaningful competition for high-speed Internet and TV service in a city dominated by Comcast Corp... Mayor Martin J. Walsh announced the Verizon move Tuesday, a $300 million investment that will roll out in select neighborhoods beginning this summer but will take six years to cover the whole city."

These are two maps which include Greater Boston and the surrounding areas as well as Verizon's Boston fiber optic plans. 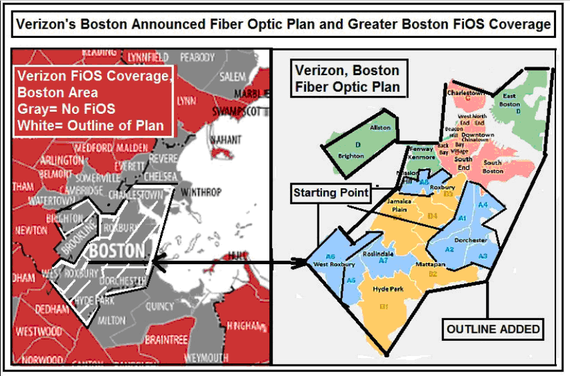 Based on the recently signed cable franchise agreement, December, 5th, 2016

Simply put: There are no written guarantees Verizon will do any other fiber to the home deployments in Boston past the starting point. This is not what the public was told or understands.

However, based on Verizon's various statements to investors, the plan was always to do a part of Verizon Boston with actual fiber to the home, and, as predicted, start tests with wireless--because it makes the company more profits.

"But it's going to be a fixed broadband wireless solution.

"And if you think about the cost benefit of that, today, if you think about FiOS and what it costs me to connect a prem to FiOS. I have to lay the fiber down the street, but then I also have to then connect the home, go into the home, make sure the wiring is right, put in install the boxes, install the routers.
"If you think about 5G, you put the fiber down the road, which is what we're doing in Boston. Then all of the labor and the expense of drilling up your driveway connecting the OT to your house and all the labor involved with that, all that goes away, because now I can deliver a beam into your - into a window with a credit card size receptor on it that delivers it to a wireless router, and there's really no labor involved and there's no real hardware other than the router in the credit card. So the cost benefit of this is pretty substantial, at least, we believe it is."

Those Lucky Few: 28% of Boston Shall be Offered Service.

Just so we're clear, here's the actual language. Verizon is only doing 28% of Boston to start.

"Section 13.14 Adjustments to Reflect Expanded Service Areas
Several provisions in this License have included values reflecting the Licensee's initial Service Area represents only a portion of the City, approximately twenty-eight (28%) of the City's geography. As new Service Areas are added, a new portion representing the increased Service Area of Licensee in relation to the City's geography shall be calculated by agreement between the parties prior to the Effective Date for such expansion. Thereafter, certain values in this License, originally calculated to be approximately 28% of a City-wide value, shall be increased proportionately based upon the new revised proportion, effective as of the Effective Date for the increased Service Area."

And that's it. There is no plan for 100% of Boston; no schedule, no agreement to continue to other areas to offer the fiber to the home, nothing but language that essentially says what is in this document is the full scope of the franchise area.

Until Verizon does the tests of wireless in Boston and some other locations, there are no expected new deployments of fiber to the home.

More importantly, we've heard such exciting things about 5G being deployed in 2017. To recap:

"So, we'll be able to go in and offer an IPTV-based services, the streaming service, the broadband service either be a 4G advanced, or be a 5G, and I think we'll get to 5G."

There are so many things wrong with this picture that it requires some more reflection. To be continued...