Verizon didn't tell the whole truth in their filing to 'shut off the copper'.

Update of Part V of the series based on the report "It's All Interconnected".

In our previous article we outlined how Verizon had started the process to shut off the copper wires in areas that are being upgraded to FiOS, which is based on fiber optics. And they are doing this via an under-the-radar procedure using Section 251 of the Telecommunication Act of 1996, where the FCC just rubber-stamps Verizon's request.

The first Verizon filing on April 22, 2014 is related to the Rockaways, Queens, New York, and it says virtually nothing except "Verizon intends to retire all copper facilities (feeder, distribution and loops) in the Belle Harbor, New York wire center and to serve all customers over a fiber infrastructure". No information about the number of customers being impacted, the services in place today that are copper-based, nothing. However, we found that Belle Harbor 'wire center' covers a population of over 50,000, called the Rockaways.

After some digging we found this: 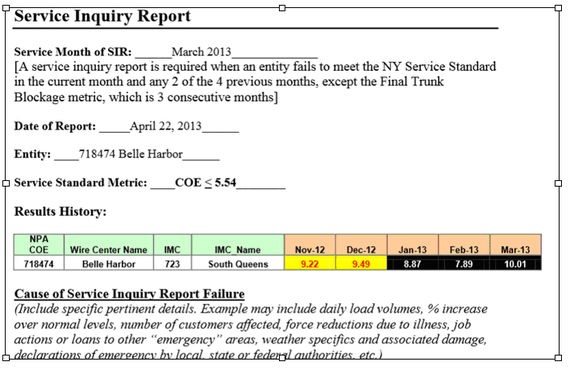 Verizon held customers hostage for months and refused emergency repairs of basic, utility phone service after the Sandy Storm, which caused serious damage throughout parts of New York and New Jersey. It now appears that Verizon could have been restored service to some/most customers sooner, but instead decided to wait until it could put in FiOS.

And people were pissed: This is an excerpt from a NY State service 'inquiry' report for Belle Harbor (the Rockaways) in 2013. (Notice the standard 'metric', which measures the quality of service, is 5.54 vs 10.01 in March 2013)

And yet, when we compare Verizon's response to our filed comments (as well as others), in May 2014, about the shutting off the copper in the Rockaways using this Section 251 procedure, it is clear that Verizon simply didn't tell the truth -- and it is also clear that allowing the company to shut off the copper wires in areas without proper review and oversight -- and customer inputs -- is a disaster in progress.

After the Sandy Storm, which hit in October, 2012, Verizon neglected to restore phone service to parts the Rockaways, Queens, New York for over five months. And there were lots of stories and anger about the situation.

"Almost five months after Sandy, there's still no dial tone for hundreds of people living in the Rockaways. The city councilman representing the area is warning the phone outage is a dangerous situation that must be fixed quickly.

"More than four thousand people live in the Ocean Bay Apartments, and most of them have had no land line phone service, according to councilman Donovan Richards.... Richards said one elderly resident of the public housing complex waits for her niece to visit, so she can use the niece's cell phone to make important calls."

Yet, here is Verizon's response to our recent comments (and others) about their plans to use an under-the-radar procedure (known as 'Section 251') to shut off the copper in areas that have been upgraded to FiOS and force customers onto FiOS.

"Not a single objection was filed by a telecommunications or information services provider, nor did any of the four comments submitted contain the information required under Section 51.333(c) to substantiate a proper objection. No commenter submitted specific reasons why it could not accommodate these changes by November 1, 2014, nor did any explain what steps it was taking to accommodate these changes. Nor did any commenter submit comments or objections specific to these two wire centers. Likewise, no residents of these areas raised concerns."

It's easy to not have objections if you don't notify anyone. There was no public hearing; there was no notification of the residents in the areas, or even New York City officials. The only notice was -- Verizon stuck up a link to their filings on their web site and then the FCC put up a link.

The actual filing by Verizon never mentioned the extensive damage by Sandy or that customers had filed thousands of complaints for months because Verizon refused to restore basic service after an emergency.

And this plan to not fix the copper wires happened throughout New York City as we found out when we met with the E9th Street Block Association where Verizon customers, in the middle of Manhattan, New York, in April 2013 -- had been out of service for almost six months after the storm.

This was a Verizon corporate-wide decision, regardless that Verizon NY is still a utility and still had obligations to restore service, as soon as possible, especially in an emergency.

"When we had the impact of Sandy, our mantra was you will not fix copper. So if copper got into any kind of a damaged situation and FiOS was in the vicinity, or we could run FiOS down an adjacent street and get into there, we would cut the copper out of service."

And why do it? Well, upselling -- that is, having the customers buy more products from the companies' own affiliates.

"Now what is the reason we want to do that? Well, when a customer goes, even to FiOS digital voice, they very quickly see the difference on copper, and we have seen the ability to sell up."

And Verizon's response outlined that there is no need to change the rules to actually have public input.

"Such a drastic change would impose unnecessary costs, discourage investment in broadband, and cause consumer harm as providers face diminished incentives to deploy and enhance their networks."

Verizon isn't making this 'investment'. They probably got FEMA money, insurance, and let us not forget that they were able to get major rate increases on basic rate, copper-based phone customers for the 'massive deployment of fiber optics'.

"Customers in these two wire centers (the Rockaways) - which cover more than 15,000 homes - have already overwhelmingly made the decision to move to either Verizon's fiber-based services or to competitors."

These customers made no 'decision'; they weren't asked, but we held captive until Verizon decided to restore service to the 15,000 customers, some who waited for over 5 months -- at least.

There are no answers to basic questions.

Verizon has filed to shut off the copper in parts of New Jersey, Pennsylvania, and Massachusetts and we have no idea what these other locations are hiding.

But then we have the larger questions:

In short, this 'rubber-stamping' of applications to shut off the copper without due process is now exposed as a farce and needs immediate investigation and those being shut off should be given the right to comment.

And the FCC should not accept any of Verizon's 251 applications until basic questions we outlined are addressed.