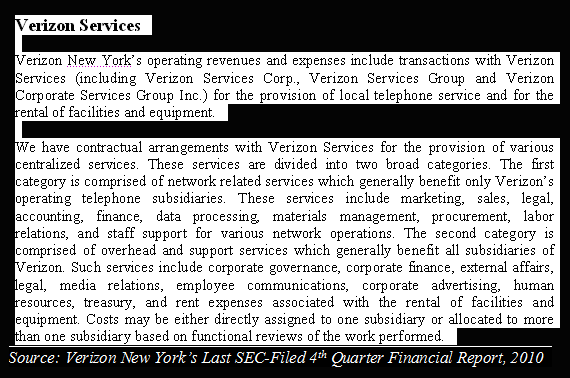 Did you know that -- if you have been or are a Verizon residential or business customer, it would appear that you are paying extra for Verizon's lawyers to take legal actions to block Net Neutrality or to create laws to raise your rates or to remove your right of having the wires fixed if they break? Did you know that you pay for "corporate governance and external affairs", (whatever that means) not to mention the company's advertising and media relations, which is used to promote the company's agenda over your own interests? In fact, without audits, it is impossible to say whether Verizon Foundation's grants that Verizon gives to non-profits, (sometimes in exchange for backing the company's proposals), or even executive pay, are part of this garbage pail accounting. And while we will present information from Verizon New York's 2014 annual report to prove this point, this is happening, we suspect, in all Verizon and AT&T state holdings.

Now, AT&T and Verizon have continuously said that it is 'uneconomical' to upgrade most areas and that the solution is to force customers onto their wireless services, (which also gets a number of financial perks, but that analysis is for another story).

But, it has all been a financial shell game. There has been massive dumping of corporate expenses, which has been going on for a while, but is now out of control and in high gear -- and this is one (of many) reasons "Local Service" and the wired networks are 'unprofitable'.

In 2014 Verizon New York showed a loss of $2.58 billion, while Verizon's "Corporate Operations" dumped a whopping $2.6 billion of Verizon corporate expenses into the Verizon NY State utility books. More troubling, in 2014, Verizon New York's 'Local Service' bucket of revenues, (which includes the copper-based residential and business phone services), came to $1.44 billion, but the expenses for Corporate Operations came to $1.57 billion -- i.e.; Local Service would be profitable if the excessive corporate subsidies weren't being dumped into the expenses. 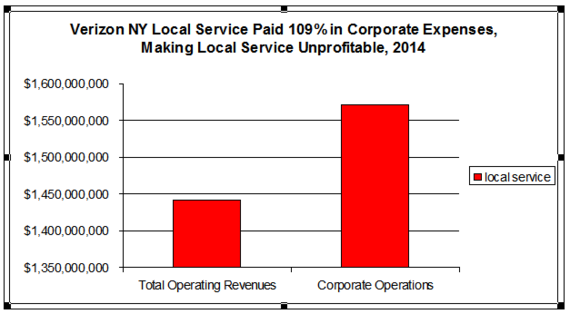 And, as we will show, if Verizon's other lines of business were paying their fair share of this expense, Local Service would be profitable. I'll get to that in a moment.

The opening includes a description of a Verizon affiliate company called "Verizon Services", which is an umbrella for the corporate-expense slush fund that ends up in the accounting of the state utility. Almost identical language appeared in every Verizon state-based SEC report for the year 2010, from Massachusetts down through Virginia, (with the exception of most of Connecticut), and even in the SEC-filed reports for the former GTE territories, including California and Florida, which are now being sold off.)

These different corporate expenses appear to be part of a collection of affiliate companies with names that sound like someone just started shuffling small pieces of paper with the words 'corporation', 'group', 'Verizon' and 'services' into different configurations to form the names of a collection of business entities.

Here is what it looks like. This is a partial collection of affiliate companies where "purchases from affiliates" are services bought (or dumped) into Verizon New York's financials. Unfortunately, there are no descriptions of these companies in the financial books or any coherent description anywhere else online.

(NOTE: We can't even get the numbers to exactly match the summary information provided, and we are not even sure if all of these companies are part of Verizon Services or are there affiliates missing. We just know that they sound similar, were part of a long list of companies, and they all charge Verizon New York for services.)

Local Service Paid 109% of Corporate Expenses as Compared to Revenues.

The first obvious question should be -- how the hell did they get away with this as it is happening in every state; we can only document New York because the State requires Verizon to file their financials annually and we could find no other state that requires and publishes this financial detail. (And, the FCC is useless and stopped collecting and publishing basic data in 2007.)

But that's only a slight wrinkle.

Verizon dumped the majority of these expenses into the Local Service category; the category that is dedicated to regular phone service that uses the existing copper wires. The company isn't focused on even advertising these services anymore, much less doing upgrades of the existing infrastructure. So, why is it paying the majority of this expense?

Local Service had $1.44 billion of revenues but was charged $1.57 billion in Corporate Operations in 2014, meaning -- Local Service losses were generated, in a large part, by these corporate expenses. 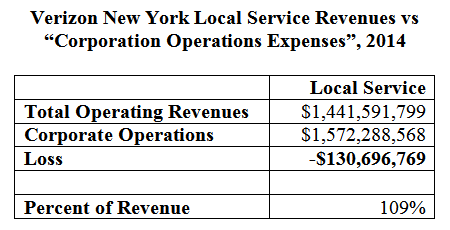 Now there are some that might say... but these are Verizon's companies; they can do what they want, right?

Well, not in this case. Local phone customers were charged extra -- in the form of rate increases for "massive deployment of fiber optics" and "losses".

In June 2009, the New York Public Service Commission (NYPSC) granted Verizon NY the third rate increase for residential POTS customers since 2005. The NYPSC press release explained that the rate increase was due to "massive deployment of fiber optics" and because VNY was "in need of financial relief" due to major losses.

"'We are always concerned about the impacts on ratepayers of any rate increase, especially in times of economic stress,' said Commission Chairman Garry Brown. 'Nevertheless, there are certain increases in Verizon's costs that have to be recognized. This is especially important given the magnitude of the company's capital investment program, including its massive deployment of fiber optics in New York. We encourage Verizon to make appropriate investments in New York, and these minor rate increases will allow those investments to continue'."

The NYPSC Order also indicated that the Commission granted the rate request because VNY was experiencing major financial losses.

"Verizon's financial condition is 'relevant' when the Commission considers pricing changes because the state has an interest in a viable company.... there seems to be little question that the company is in need of financial relief; Verizon reported an overall intrastate return of a negative 4.89% in 2006 and its reported intrastate return on common equity was a negative 73.6%."

And in granting the second rate increase in 2008, the NYPSC said there were the same 'dual financial pressures' as found in the first increase in 2006 -- fiber optic investments and financial losses of basic service. ("Intrastate" service is where the calls never cross state boundaries or the service has been classified as 'in-state'.)

"This is especially important given the magnitude of the company's capital investment program, including its massive deployment of fiber... There seems to be little question that the company is in need of financial relief; Verizon reported an overall intrastate return of a negative 4.89% in 2006 and its reported intrastate return on common equity was a negative 73.6%."

And then there are those who will argue that local phone service is not based on the old 'rate-of-return' where expenses and revenues were taken into account. Unfortunately, the State and Verizon tied the increases to specifics --'massive deployment of fiber optics' and 'losses', so the expenses do matter.

In going through the total rate increases, and just examining basic residential phone service and a few 'ancillary' service increases, (such as inside wiring or non-published numbers), the consequence of this pile-on of additional costs to Local Service financials is that:

The losses appear to be manipulated so that Local Service would pay an unfair share -- not a 'fair and reasonable' share.

There are four major financial areas -- buckets -- of revenues and expenses in the state-based financial books.

However, the Non-Regulated financial bucket only paid 10% of the Corporate Operation expenses and this calculation had nothing to do with the total revenues it brought in.

Low and behold, if we re-engineer the expenses based on revenues, Local Service overpaid Corporate Operations expenses by $855 million while the Non Regulated side underpaid by about $448 million and Access underpaid by $407 million. 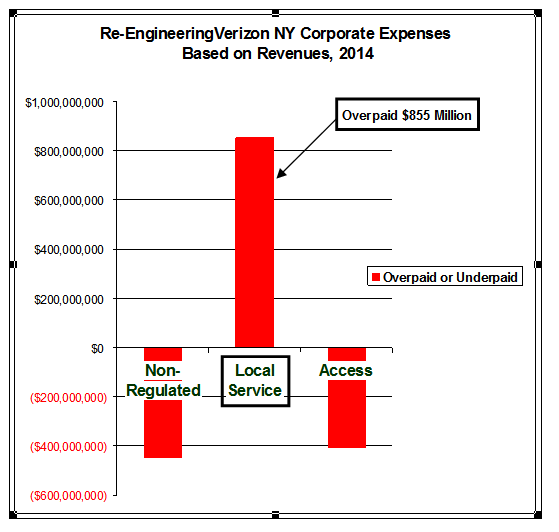 Moreover, Local Service should have only paid about $718 million for just this one massive expense item. Rebalance this expense and Local Service was profitable in 2014. And even that should be contested because of the myriad of expenses being added that have nothing to do with provisioning phone service.

Is it legitimate to reverse engineer the expenses based on revenues? With $2.5 billion in losses a year for the last five years and losses extending over the entire last decade while the 'massive investment in fiber optics' is not happening for the majority of New York State -- you bet it's legitimate and should be demanded by every customer who had rate increases, especially those who can't get the high-speed or cable services.

But there are deeper issues that require investigation. If Local Service is really profitable, especially if Verizon's other subsidiary businesses are not paying their fair share of the expenses, the premise that Verizon's failure to properly upgrade and maintain the network because they are 'uneconomical' is suddenly in question. Worse, forcing customers onto inferior wireless services using this manipulated mathematics -- requires immediate audits and investigations.

As we go through the rest of Verizon New York's financials, feel secure in the knowledge that every Verizon state and most likely every AT&T state is using the same corrupted slush fund shell game.

And this analysis also calls into question all of the previous rate increases, and there have been many over the last decade. I leave you with a chart of rate increases and changes to service in New York for just the year 2013. And remember, each service is taxed, fee-ed and surcharged multiple times. 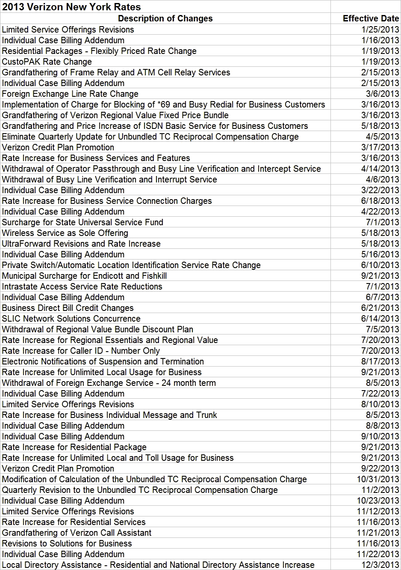