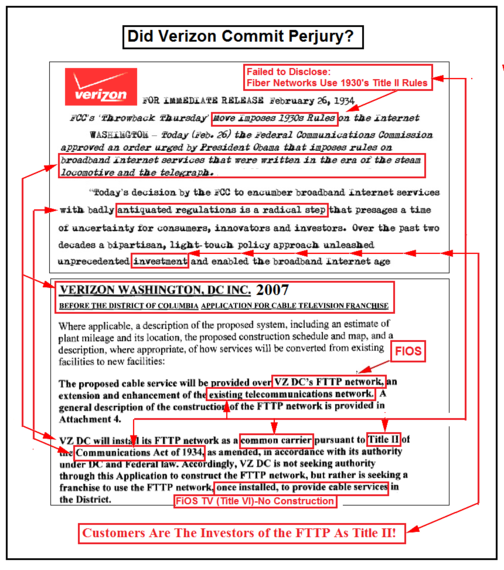 On February 26th, 2015, Verizon put out a press release claiming that the FCC's Net Neutrality decision was a "throwback that imposes 1930's rules on the Internet". And they put out an additional release -- in the language of a telegraph, the old "Morse code" -- to reinforce this view point. Here's an excerpt.

It goes to say that the FCC's decision is based on antiquated, utility-style regulations and rules written in the era of the steam locomotive and telegraph.

But there's a serious problem. The previous mark up includes this excerpt from Verizon's FiOS cable franchise application for the District of Columbia in 2007. (Note: Verizon uses similar, if not identical language in every Verizon state and municipality FiOS TV franchise.)

Besides the fact that as of 2015 Verizon's District of Columbia deployment is far from done and was extended last year, we find this curious thing -- Verizon's Fiber-to-the-Premises (FTTP) networks are Title II, common carriage, telecommunications networks that were built pursuant to that "old-time" utility regulatory classification, found in the Communications Act of 1934.

Which brings me to the case against Verizon.

On January 13th, 2015 New Networks Institute filed a Petition for the FCC to investigate whether Verizon has committed perjury as Verizon has failed to disclose to the FCC, courts or public that their current fiber optic deployments, including FiOS, and infrastructure investments in other services, such as wires to the cell tower facilities for Verizon Wireless, are based on Title II. Verizon responded with a letter denying our claims on January 20th, 2015. On February 24th, 2015, we responded to Verizon and submitted a supplemental report: "Show Us the Money PART I: Verizon's FiOS, Fiber Optic Investments, and Title II"

There are five basic reasons why all this matters.

The implications of this financial shell game are many. For example, Verizon has claimed that the networks are 'uneconomical' to upgrade (or repair) and they want to 'shut off the copper' or not repair whole regions of their multi-state territories. Instead, it appears that the company is diverting construction and staff to other lines of business, which is causing financial losses, while customers who were hit with rate increases aren't getting what they paid for

Verizon will most probably use this 'woe-is-me', 'utility-style' regulation theme in the next legal action they take against the FCC, as well as before Congress in legislation they get their friends to introduce to overrule the FCC's decision, which will be joined by all of the other phone and cable companies.

Least in the case of Verizon, the FCC is on solid ground about reclassifying the networks as Title II because Verizon's own SEC and cable franchise documents, among other orders, filings, etc. not only shows that the networks are already Title II, but it may contradict many things Verizon will be presenting as 'facts' in whatever court case shows up against the FCC.