"Re: Huffington Post article. Just so you know, corporate tax is based on profit not revenue. Basic accounting."

In the prior article "Verizon NY Paid Virtually No Taxes since 2003; Averaged $2.5+ Billion in Losses a Year for Five Years', there were two main parts:

1) First, it examined the losses of Verizon NY, (VNY) the state utility. On average, VNY lost $2.5 billion annually for five years (2010-2014) and the Verizon NY's annual reports showed that the company had shown losses since 2003.

These losses had multiple benefits to Verizon. Besides not having to pay most taxes, these massive losses per year were used to claim that the local phone networks are unprofitable and VNY received multiple rate increases, in part, to make up for these losses.

In another previous article I outlined how the losses were from manipulating the accounting so that the other lines of business were cross-subsidized, where the local service networks ended up being charged the majority of these expenses. Also, Verizon used the losses to claim that the networks should not even be maintained or upgraded - and to, of course, eliminate the union workers that are tied to these networks.

2) Second, Verizon claims that comments made by the Bernie Sanders' campaign about Verizon's tax payments were wrong.

Checking the info and using the original sources, Verizon corporate annual reports, we found that the total revenues, for the years 2008-2013 came to $659 billion; Verizon's claims that it made tax payments of $3.4 billion in those years. The end result was that Verizon was able to manipulate the expenses to pay ½ of 1% in taxes as compared to the revenues.

How Should Company Taxes be Examined? Are Corporations People?

Now, some people wrote claiming that I missed basic accounting principles and that I needed to do the 'effective rate' of taxes after all of the expenses and deductions -- on just the profits.

But this is backwards -- the average working person is taxed based on their income; their taxes are, in fact, withheld from their paychecks and they may or may not be able to take serious deductions to get a large refund.

And everyone who has money withheld from their monthly paycheck for taxes is probably thinking - if they take a chunk out of my check every paycheck, and if corporations are people, how much did Verizon pay? Why should Verizon get out of paying taxes if they can manipulate the tax code?

There are those who have advocated a 'flat tax' - a tax on sales, i.e., income/revenues, with some deductions, and this would apply to businesses and as well as individuals.

I admit freely that I am not a tax accountant, and the government numbers I examined about what people (and corporations), are currently paying would need weeks/months to figure out, as the data can be from different years or the data by income has been merged into unuseful categories -- caveat upon caveat.

But the raw numbers we found show that Verizon is paying a fraction in the ratio of revenues to tax payments, as compared to most American households or individuals.

The bottom line is - Verizon, for the years mentioned, was able to manipulate their tax obligations to pay a marginal amount compared to their revenues -- and this is basic accounting. Over the six year period Verizon averaged $110 billion and paid only a half+ billion.

Most working stiffs don't have the ability to use the tax code, lawyers and accountants to do these kinds of maneuvers and avoid tax payments. And while I'm not advocating a 'flat tax', if corporations are individuals, maybe they should pay taxes based on revenues, with requirements on what they must pay.

Let me give some basics.

The Tax Foundation states that the average person making around $53,000 is paying 31.3% in taxes, which includes income and payroll taxes, including social security - i.e., your paycheck has a number of deductions taken out to pay your taxes. 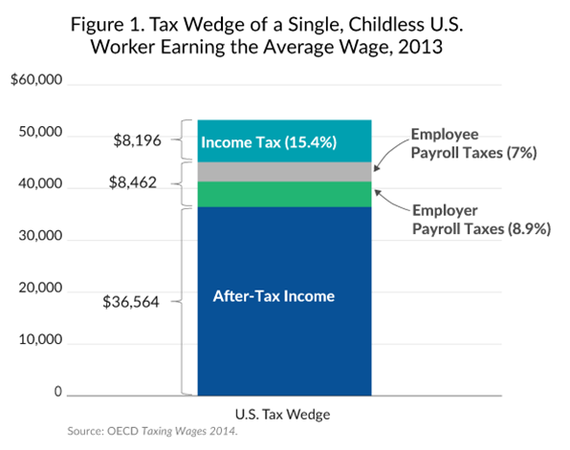 "In total, the average worker pays $8,196 in income taxes and $8,462 in payroll taxes, which are meant to fund programs such as Social Security and Medicare.

So how much in Federal taxes are applied to households?

Money/CNN claims it is a bit different, from the same source, but close enough for this discussion, at $54,000.

And how much did these households, with an average income of around $54,000 pay in federal taxes? Motley Fool posted IRS info for the year 2011, showing the average federal income tax would be over around $4000.

This would not include state income taxes and all of the other taxes listed in the Tax Foundation analysis.

Justfacts gives the Congressional Budget Office's federal tax 'burdens' and percentage, also for 2011, and $54,000 would be around $5 grand - with a federal tax effective rate of 9%. 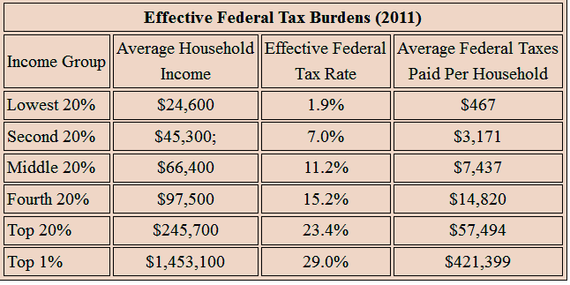 Then we also have 'tax deductions'

Unfortunately, there is no reliable data we could find that would break out of the revenues, tax payments and the amount of deductions or even the amount of refunds. The IRS, for example, doesn't give their refunds and taxes paid by any specific breakouts, such as covering different income ranges. And other data has a host of caveats that could probably fill gigs upon gigs of hard-drive space and take weeks to calculate.

One thing should be clear - Verizon was able to essentially pay ½ of 1% -- because they came up with expenses, tax credits, deferments, and accounting machinations between 2008-2013 that allowed them to pay $3.4 billion in six years against $659 billion in revenues--i.e., chump change for a company averaging over $100 billion annually and paying about ½ billion+ in taxes annually.

And while some may want to only examine the profits of a company to calculate the tax, if corporations can manipulate their bottom lines, maybe we should embrace the idea that 'corporations are people' for tax purposes; maybe we should have their revenues taxed and restrict the deductions so that, they too, join the working class when it comes to tax fairness.

Finally, while Verizon decided to go after the Sanders' campaign about their tax analysis -- it's about time this was brought into the light about how corporations are above the tax laws and rules and should pay their fair share.