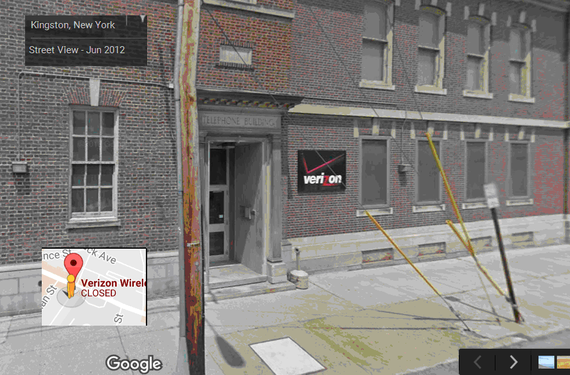 First, the news: On September 13th, 2016, the City of New York sent a letter to Verizon that it had defaulted on its cable franchise agreement with the city. By July, 2014, Verizon should have upgraded the networks so that all households could get a FiOS, Fiber to the Premises, "FTTP" service.

But, it is the charging of billions of dollars to build out the wireless networks and the abandoning (or not upgrading) of most of NY State's wired infrastructure (for retail services) that our new SPECIAL REPORT details. In New York, Verizon was granted multiple rate increases, starting in 2006, to pay for the "massive deployment of fiber optics", which was charged to every phone customer, including low income families and customers in rural areas. In fact, customers (including low income families, seniors, small businesses, etc.) in New York City that have or had phone service (2006-to-today), also paid extra for these upgrades, even if they didn't get them (or want them).

Verizon claims it is now a 'wireless-first' company. But Verizon also controls, state by state, the state-based wired utilities and business networks from Massachusetts to Virginia, with only a few exceptions. Verizon has no serious plans to upgrade or even maintain the existing retail copper wires. Even Verizon's FiOS fiber to the home deployments stopped in 2010-2012, except for areas with existing license agreements. And while Verizon claims that in Boston they are finally doing fiber to the home to deliver wireline broadband, it is a 'trial' to instead deploy and substitute wireless broadband, which still requires many wireless antennas to be connected to a fiber optic wire. (As of now, 5G is more a hyped next-generation mirage than a working service to replace fiber to the home.)

But there are more troubling issues. What should be of major concern to all Verizon municipalities and cities is that Verizon has diverted billions per state to build out its wireless networks by having the wireline state utility take over the capital expenditures' ("capex") budget, thus phone customers, pay for the capex. In just New York, Verizon built 5,515 cell towers and charged local phone customers and the state wired utility an estimated $2.8 billion for just 2010-2012. On top of this, Verizon Wireless pays a fraction of what its competitors, such as Sprint, pay for the use of the Verizon networks, known as "special access".

This diversion of funds is one of the primary reasons why the work in most cities along the East Coast abruptly stopped around 2010-2012, or the municipalities were never even offered service. And, this lack of payment back to the wired networks is also one of the primary reasons the local phone networks are 'unprofitable'; the financial books are manipulated to make local phone service pay the majority of expenses.

In fact, throughout the East Coast, from Massachusetts to Virginia, Verizon has left the majority of municipalities with a deteriorating copper network, which, depending on the state, should have been replaced with fiber optics. This has left most areas without direct, very fast broadband and thus cable competition, but also left most cities without serious upgrades of their town, or even working reliable service.

In 2015, DSLReports summed up the current situation based on recent calls for broadband deployment in cities across the East Coast.

"With the exception of major city franchise obligations (and even those have lots of wiggle room), Verizon all but ended their FiOS expansion plans around five years ago. With so many un-served cities still begging to be upgraded Verizon continually has to remind folks that they're simply not interested in upgrading their fixed line networks any more. If you live in one of those un-upgraded cities like Buffalo, Boston or Alexandria, that's a tough pill to swallow."

NOTE: The opening picture is of a Verizon Central Office (CO) in Kingston, New York. That is testimony of this abrupt changeover. According to union personnel, the CO could have been 'lit' to deliver service, but was never implemented. Instead, the staff was deployed to do wireless deployments. (Note: Every city has a number of Central Offices, which are buildings where the wires and services are aggregated in the community.)

Unknown to most, depending on the state, Verizon was able to manipulate the accounting to charge local phone customers extra to fund the fiber-build out as well as to pay, via cross-subsidies, for the deployment of Verizon's other lines of business, such as special access, which has unchecked 'Earnings Before Interest, Tax, Depreciation and Amortization (EBITDA), profits. Meanwhile, "Local Service" was left holding the proverbial bag to pay most of the expenses and thus loses money.

(In fact, as documented in "The Book of Broken Promises", the lack of fiber optic broadband can be traced to changes in state laws in the 1990's to have entire states, from New Jersey or Pennsylvania, completed with 45 Mbps bi-directional services.)

Verizon and the other incumbent phone companies have also been able to hide the majority of access lines, all of the "special access" wires. These are the wires that go to the cell sites (sometimes called "backhaul") or carry retail data services, like alarm circuits and to ATM machines. Yet these wires are actually part of the state utility and are the same as phone wires, but, since they are under a different regulatory covenant, they have high profits because the accounting could be manipulated.

"Consumer Federation of America (CFA) estimates that large incumbent telephone companies have engaged in abusive pricing practices for high-speed broadband "special access" services, with overcharges totaling about $75 billion over just the past five years. As a result, CFA estimates that the indirect macroeconomic loss to American consumers doubles that damage to a total in excess of $150 billion since 2010."

We believe that the first step is to document the cross-subsidies, then stop the diversion of the billions going to fund wireless and 'redirect' it. Wireless and all other affiliates would be paying market prices, which would not only supply money to build out the networks to residential and business customers, but dramatically lower rates, especially for the low income families and the elderly that funded the wired networks and FiOS through rate increases in New York. Unfortunately, the cross-subsidies appear to have occurred in every state telephone utility, as many were set via the FCC federal cost allocation rules.

The irony is - wireless densification requires fiber optic wires. All of the "loss of lines" stories have been manipulated, as they do not count the growing special access markets--or the actual lines in service.

Why It Matters Now:

Every Verizon State and Municipality is in the Same Boat.

Boston Is a 'Trial' to Shut Off the Retail Networks Completely, but have the Wired Customers (and Special Access) Pay for It--Statewide.

The developing story of Boston should have cities realizing that there will be no fiber to the home or even copper maintenance by Verizon. In April 2016, Verizon announced spending $300 million on a six year project to bring FiOS fiber to the home to all of Boston.

"Verizon to build $300M fiber network in Boston"..."Verizon will bring its fiber-optic FiOS network to Boston over the next six years, city and company officials announced..."

Unfortunately, this does not appear to be true. Verizon plans only to do partial coverage of the city, not even all of the neighborhoods, or the surrounding towns and cities. The real plan is to test whether customers will buy wireless broadband - because it is so much more profitable.

"So are you deploying fiber differently now in Boston than you've done for FiOS in the past? Does each small cell need like their own fiber home run to that small cell? Are you going to be deploying a lot more fiber than you have historically?"

"Yes, we will. And so, as it relates to FiOS, we've announced a few of the suburb areas, for lack of a better word, for cities, sub cities that we are going to be building into. But beyond that, if you think about the use case for small cells and the coordination elements of the radio access network that need to occur between its corresponding home macro and the small cell, that suggests that, as a general rule, you need home runs from that small cell directly back to that coordinating macro-level cell site. And that's exactly what we are doing."

Thus, the networks will not be using the fiber optic deployments for FIOS. Instead, Verizon will do a bait-and-switch and run wireless services. And there is no proof that what they want to do--replace wireless for the equivalent of FiOS, will work. 5G is years away, if ever. Worse, Verizon will NOT be building out most cities and towns with wireline broadband, especially in areas it hasn't upgraded for the last decade+.

Besides getting the municipalities upgraded, it is clear that examining the cross-subsidies of wireless and the other lines of business must be done. The alternative is that America is in for less service at higher costs with Verizon et al. controlling the wires as well as the wireless business.

And the prices for services, such as local phone service, are no longer based on 'fair and just' rates on all levels including Business Data Services. This also includes the rates for a competitor to rent the wires.

We believe AT&T's plans are similar, if not identical. The plan is to claim the new fiber being installed is going to the homes publicly, but more/most goes for the wireless service. And on top if this, it is funded via the wireline budgets.

So, will Verizon even finish New York City without a legal challenge? It's doubtful based on Boston's bait and switch.

The SPECIAL REPORT is partial summary of what we have uncovered, followed by PART II: Data Report. I'll be covering the reports and their implications in future articles.

(The report includes this article and continues from there.)

Proving Verizon's Wireline Networks Diverted Capex for Wireless Deployments Instead of Wiring Municipalities and Charged Local Phone Customers for It."