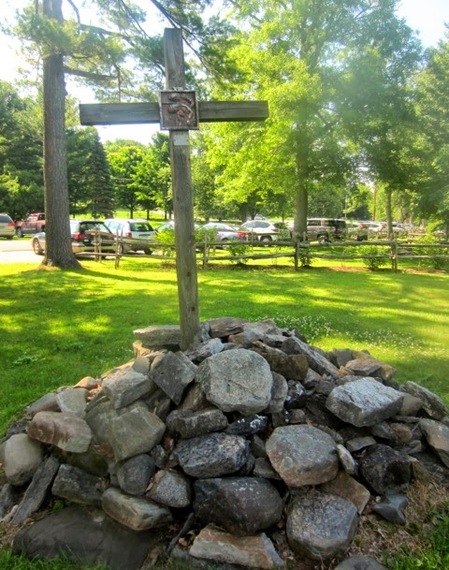 Captain Pierre La Motte founded Fort Sainte Anne as a defense against the Mohawks in 1666. It's Vermont's first European community and the site of the first Jesuit mass and Catholic chapel. Saint Anne's Shrine stands today on the Isle of La Motte on Lake Champlain and wandering down across the parking lot towards the lakefront, you come across a statue of Champlain himself (in the company of another Indian warrior), a monument with the inscription "presented to the town of Isle La Motte by the State of Vermont July 7, l968." The outdoor chapel was bathed in sunshine on Sunday July 6, 2014 and the parishioners were on the knees intoning the Lord's Prayer, "Our Father Who Art in Heaven Hallowed be thy name." "Forgive me, Father, for I have sinned" and Christ's "My God, my God, why has thou forsaken me?" might have come to mind to the tourists gazing through the foliage to the shimmering surface of the lake, with its paddlers and sailors and water skiers. The Shrine is a sanctuary which epitomizes peace and yet all around it life is proceeding in successions of parallel cycles which recall Kierkegaard's esthetic, ethical and religious states of being, with beauty in its materialized form and serenity in its spiritual form holding hands like a pair of lovers on a summer's day.