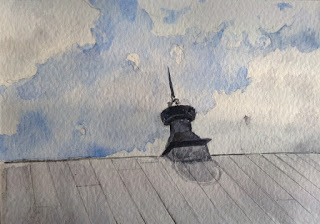 Going through the roof is an expression that indicates someone has lost their temper. When someone goes through the roof it's often a sign that they've received some news that they didn't enjoy hearing. For instance, you might go through the roof if the roof job you'd commissioned turned out to be faulty and there were leaks which ruined the freshly stained and polyurethaned floors of your converted barn. In fact when you travel through horse country, like the lush fenced in fields in an area like Woodstock, Vermont, which boasts the famous Billings Farm, you see many barns with roofs which have been punctuated by ancient vents which could be mistaken for weathervanes. In the middle of the current heat wave, you are easily able to see the virtues of going the through roof as long as it's a thing rather than a person. Most of the barns you view are comprised of these unique contraptions which also convey an extraterrestrial aspect, as if while allowing in fresh air they might also be signaling something to creatures from outer space. Sometimes a simple appurtenance can turn out to have an unanticipated meaning and you never know in our world of Edward Snowden and government spying if an innocent looking device were really collecting data, about the horses in the barn and who or who isn't going to hit the roof when they find out that that their privacy can even be compromised in even the most backwoods environment.