"Sen. Bernie Sanders (I-Vt.) demanded on Thursday that regulators impose limits on oil speculation to help lower the price of gas in a letter sent to President Obama. 'There is mounting evidence that the skyrocketing price of gas and oil has nothing to do with the fundamentals of supply and demand, and has everything to do with Wall Street firms that are artificially jacking up the price of oil in the energy futures markets,'" Mr. Carter reported.

In the current regulatory environment, the Green Mountain State is included in those who are defined a speculators. They provide the corpus -- the money -- as investments in hedge funds and commodity indices. In effect, Sen. Sanders is mad with the labor unions and civil service employee retirement plans -- the largest investors in the asset class known as Managed Futures -- what some like to call speculators. I said as much during a television interview on Good Friday:

With a little digging (on Google), I found documents that show that the $2.5 billion Vermont Pension fund has a 2 percent allocation to commodities. Vermont's Pension Investment Committee approved the allocation circa October 2009. 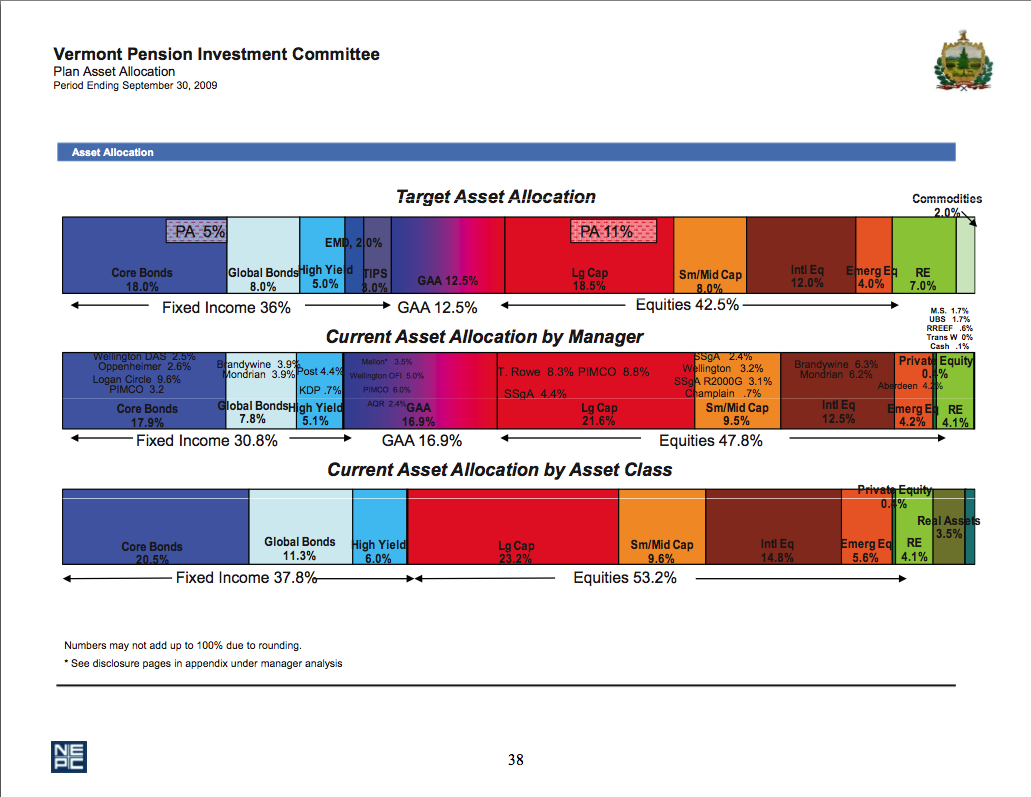 Vermont's initial allocation to commodities at 2 percent, top bar on the far right. 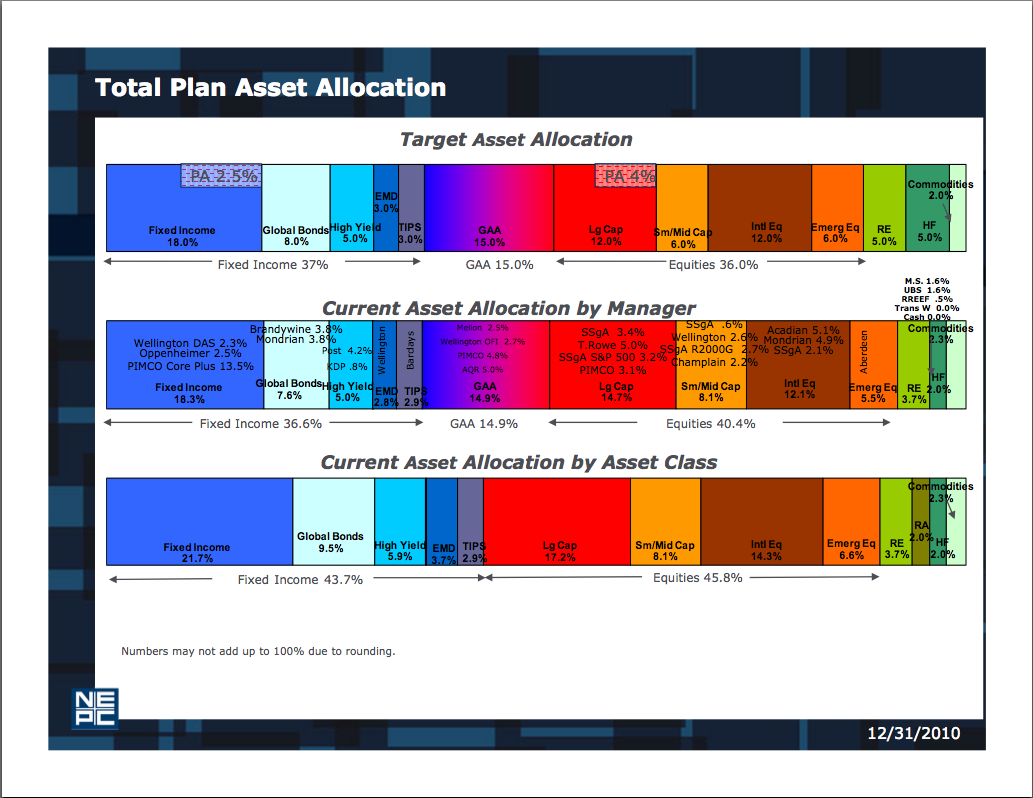 Vermont's commodity investment is through the DJ-UBS Commodity Index, which has a whopping 34 percent allocation to energy futures, with 24 percent of it in crude oil, heating oil, and gasoline. The crude oil allocation is 16 percent alone. The Index holds a 29 percent long allocation in agriculture futures.

A 2 percent allocation might not seem like a lot, but that means that Vermont's pension controls upwards of 78,000 barrels of crude oil, just like the speculators that the Senator admonishes in his ranting letter to the President. When you add in the collective activity of other state pensions, the situation seems much more grave.

Since Vermont's investment is long-only, they do nothing but buy crude oil and, if you believe what you've read, drive up the prices on the citizens of Vermont where, in Sen. Sanders own words "It is not uncommon for people to commute 100 miles to work and back five days a week, the increased price of gas is taking a serious bite out of the paychecks of middle class families." I don't believe that buying commodity futures changes the price of the physical product. (Only OPEC can redirect America's xenophobia and turn it into a backlash onto itself.)

The Role of the Commodity Markets

The commodity markets are insurance markets where buyer and seller trade price risk. In order to get paid for taking the risk, there needs to be a premium paid -- just like in life insurance. Risk transference and price discovery are the two functions of global auction process in the commodity markets.

It goes without saying that the price of crude oil futures trade at a premium to what the forces of supply and demand would dictate solely. In the last week alone, the energy market have had to interpret:

The Senator continued: "We have a responsibility to do everything we can to lower gas prices so that they reflect the fundamentals of supply and demand and bring needed relief to the American people at the gas pump are driving."

I couldn't agree more with Sen. Sanders. That's why I'm calling on Vermont's pension and all pensions across the country to divest of their entire commodity allocations and to stop driving up the prices of energy on the citizens of Vermont and the U.S. at large ... and then blaming themselves. It's not logical for sitting Senators to do that. I'd also encourage them to take a class on financial literacy. Their understanding of commodity markets and of their own investments is lacking.

I hope you all understand that I'm being entirely facetious, and that Vermont is no more a speculator than the little old lady from Pasadena who wants protection from the bumper crop of dollars the Federal Government has printed. The "hedge funds" as they're referred to, cater to labor unions, civil service pensions, municipalities, and university endowments, primarily because they can meet the $10 - $25 million account minimum investment that go along with these large hedge funds (they are called Commodity Pools specifically). It's safe to say that the majority of the beneficiaries of these entities are not known for being Republican...

The Managed Futures asset class is invaluable to these institutional investors as it lowers the overall risk to their combined portfolios and enhances their returns. This is before the pensions and civil service benefit plans address what is known as Longevity Risk -- the risk that comes with beneficiaries living much longer than the actuarial tables calculated for. Although it's not the thrust of this article, it's a giant risk to them and to the beneficiaries who are counting on those monthly checks.

Where the Real Risks Are

Besides terrorism, one of the real risks to the overall markets are the high-frequency traders who caused the Flash Crash. Based on Barron's columnist Jim McTague's new book Crapshoot Investing, neither Chairman Mary Shapiro and the SEC, nor Chairman Gary Gensler and the CFTC have any literal understanding of what is going on in the markets each day. The SEC and the CFTC rely on the exchanges for direction, but the exchanges are in bed with the HFT traders who pay enormous fees (sometimes as much as $50,000/month) for privileged data and speed.

I think this issue is much more an immediate concern than trying to decide if we should limit Vermont or other municipalities individual or collective positions sizes in crude oil. But then again, we are into election season ...

Under the current understanding of asset allocation and investment finance, it is possible that we will pay more at the pump for gasoline and more at the grocery store for food due to global risks as perceived by commodity indexers and other commodity investors.

I do not begrudge a labor union, a civil service/state retirement plan, nor a college/university endowment the opportunity to get better returns and lower risk for their beneficiaries by having investments in managed futures (even if it means I have to pay higher prices). I commend Vermont's Investment Committee for making such an investment. They are forward thinkers.

I'll be Tweeting from the Milken Global Conference this week with the hashtag #GC2011.

Michael Martin's book The Inner Voice of Trading will be out in October.