A few days ago, I had the good fortune to be able to participate in a protest march in Vermont's capitol city of Montpelier. The action was partly an expression of exasperation over the fact that the state is cramming a GazMetro fracked gas pipeline down our throats in spite of ongoing rigorous opposition. It was also the culmination of a weekend long northeast regional "climate convergence" convened by Rising Tide Vermont, 350 Vermont and the Vermont Workers Center. The aim was to build solidarity and facilitate some planning for the People's Climate March, scheduled for September 21 in New York, and billed as the "biggest march for climate yet".

I have my concerns about the march -- especially because it is not clear what demands are being made other than acknowledging that we are "concerned" about the climate problem and want something done about it. Some are making an unqualified demand for "100 percent renewables" (which in my opinion is like asking for fairies to forever after clean my house and cook for me.) Yet others are asking for "green jobs" (which, in my opinion is like asking for a pair of clean underwear to put on as we march in shackled slavery towards our demise in the machinery of capitalism.

Not approaching the stage with some clear demands is dangerous because of the plethora of false solutions -- things that will not help but rather make things worse - disguised as "solutions" and profitable to the corporate one percent. Those include things like clean coal, natural gas as a "bridge" fuel, or biofuels and burning trees for electricity as "clean and green", or payments for ecosystem services and forests as offsets to polluters, or corporate UN initiatives like "climate smart agriculture" (a la Monsanto) or "sustainable energy for all" (sustainable meaning ongoing profitability). These are peddled by the very corporate capitalists who got us into this mess and now apparently are willing to drive the entire planet, themselves included, into extinction, rather than forego a drop of profit. Having spent a lot of years filtering through these false solutions and calling for "system change not climate change", this demandless march is a bit worrisome. The purveyors of false solutions will likely welcome it with arms held wide open and spittle dribbling down their chins.

But there is the fundamental fact that we absolutely must build a coherent movement for change, and I have concluded that it makes more sense to hold out some faith that people can and will deepen their analysis and hone their demands as we move forward in building that movement. The alternative, no movement and no clear demands, may be no worse, but could be at least a step. In New York, we can hope to at least convey a message to the rest of the world that the tea party climate deniers in power are not representative. I am trying to think positive.

What was so striking about this past week's events in Vermont was the fact that we had such a ripping good time! We had The Make and the Rude Mechanical Orchestra and Bread and Puppet Theater providing copious quantities of art rhythm, talent, energy and wit. We had all manner of amazing costumes, street skits ("this is a gas pump, this is a pickle"), singing, music and dance. The sheer creativity of the whole event filled even myself -- the worlds biggest doom and gloom skeptic, with a sense that just maybe these folks might just have what it takes to stave off utter collapse. At least we can and should, and indeed deserve, to have fun along the way? Emma Goldman once famously stated: "If I can't dance I don't want to be in your revolution." Others have stated that "the revolution will not be funded". The New York march is funded alright, and some are quipping that all that cash could go a long way towards, say, community battles against fossil fuel infrastructure and other grassroots campaigns. OK, so perhaps the revolution wont be funded, but at least it could be and should be a little fun? 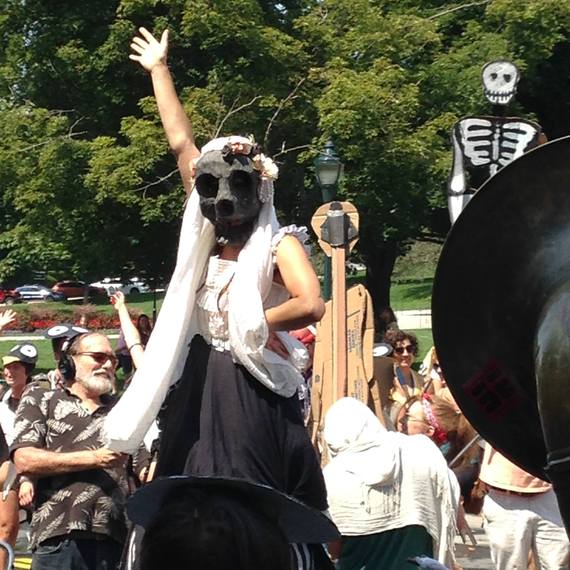 I arrived home to find the news that Robin Williams had committed suicide on this very same day. Such an odd juxtaposition! I felt like I had just slammed into a solid brick wall at full throttle. Yet somehow, there is no sense of waste, given how alive the man was in his day. And it seems not surprising either that he should choose to put an end to it. Being so incredibly brilliant and on the mark with such lightening speed wit must wear on a tender soul. We all know someone a bit like Robin, with a fast burning flame that cannot linger too long. I got to thinking about why Robin Williams was so very much loved. It is because he could pull off his unique style of comedy and commentary with a constant strong bass note undertone of compassion and kindness. The man was a good, kind soul, who could portray compassion in his acting career because he actually knew it. One can only guess that he likely felt the razor cuts of his own rapid-fire insights into life with some persistent pain.

We will have to carry on living without Robin Williams, but we can honor his message: Fun, Humor and Compassion are GOOD and they are what draw us together. We may be the most destructive species ever to have lived with the capacity to despoil our earthly paradise and unleash untold cruelties upon one another (Gaza). But humanity also has its' Robin Williamses and the creative, talent and passion of activists who put themselves on the line and remind us that our commonality lies in having fun together and taking care of one other while speaking truth to power. Therein lies some serious hope! And at the very least, we shall approach what appears to be impending apocalypse, dancing arm in arm, with colorful costumes, smiles, mutual respect and admiration, and oddly perhaps, even some humor!