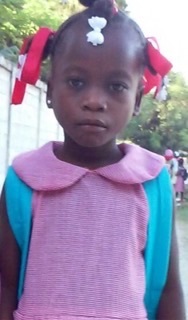 VERRETTES, Haiti -- During a recent trip to my home town of Verrettes, I noticed a small girl walking alone in my neighborhood. Though I didn't realize it then, my life changed in that instant. She carried a heavy load on her head and looked malnourished. She said her name was "Nou Fini," which turned out to be a mountain nickname meaning "We're done" (more on that later). When I asked her where her parents were, she said she didn't have any. That night I could not sleep. After asking around the next day, I learned that she lived with an unrelated family, basically as a slave. A visit there left me sad and angry. After I returned home to the US, I felt like I had abandoned this little girl to a horrible situation.

I hounded my family in Haiti to search for her parents or relatives. I had no idea what to expect, whether there would even be a living mother or what she would think of some prying outsider, particularly given the ominous name, "We're done." (As it turns out, it probably refers to Manise being the last child, number seven.) It took a month, but we discovered that she did in fact have a mother and a real name, Manise Aufilus, and she is 7 years old. The mother, who lives a three hours walk up the mountains from Verrettes, said she gave Manise away because she couldn't afford to feed her. For the same reasons she also gave away Manise's 10-year-old sister, Remiltha, to a different family.

After speaking with Manise's mother, I was very relieved that she decided to retrieve her daughters from the abusing families. After further discussions, Manise and Remiltha's mother agreed to let my family and me take care of them. The two girls are now staying with my mother and other relatives in Haiti, where they are getting lots of love and attention. In August I went back to Haiti for four weeks to help get them settled in and prepare them for school. It was amazing to see how quickly the girls became comfortable with me and my family.

Manise had heartbreaking stories to share with us about the family she had lived with. The first morning at our house Manise woke up at 5 a.m. and asked my mother whether she should do the dishes and scrub the pans. My mother said, "You are not here to scrub pans and do dishes in this home!" Manise told my mother that the woman she lived with used to wake her up at 5 a.m. to do chores. She said if she didn't do them immediately the woman would beat her with a stick.

Remiltha also had painful stories. An older man who stayed at the house where she was living would touch her chest whenever no one was around. She told the woman she was living with about it. Instead of questioning the man, the woman beat Remiltha.

On the day that Manise and Remiltha's mother brought them over to our house, I literally became terrified. What am I doing? What am I getting into?

I'm pretty much a free spirit, sometimes working as an actress in Hollywood, CA, sometimes as a community/political organizer in South Florida. I'm hardly a stay-at-home mom. I had not been back to Haiti in thirteen years. Yet here I had impulsively started down the path to instant motherhood and constant travels to Haiti. So far I am very happy to see how joyful Manise and Remiltha have become. This is by far the best thing I have ever done in my life. 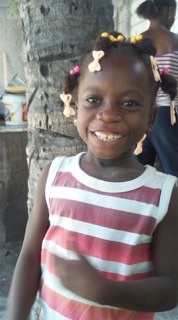 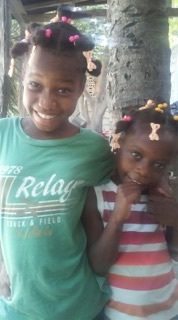