Marie Antoinette would be proud: The Northern Virginia palace modeled on Versailles will have a movie theater -- with concession space.

The Washington Post reports on a 25,424-square-foot mansion, called "Le Chateau de Lumiere," being built in the Hidden Springs section of the extremely wealthy Virginia locality of Great Falls.

Neighbors don't like the flashy looks of Le Chateau, which the Post says will likely cost between $15 million and $20 million to build:

Some neighbors see an eyesore that is not in keeping with the Hidden Springs's traditionally Washington aesthetic, elegant but understated. They also object to the owners knocking down acres of trees to build a home in a neighborhood that was specifically created to be a wooded retreat from go-go Washington.

"It's going to put a spotlight on the neighborhood," Thomas J. Burns, a Hidden Springs resident, said of the chateau. "I'm disappointed someone would disturb the natural beauty of Great Falls by building such a showy home here."

Though the house's square footage is impressive, for all the sturm and drang the Post's description of the house itself makes it sound luxurious, but not opulent enough to fester a revolution:

Plans show the home will have five bedrooms, three two-car garages, an elevator, and a pool and a pool house. The entrance foyer will feature two sweeping staircases leading to a gallery running the length of the home.

The basement alone will have a wine cellar, an exercise room, a billiard room, a theater with a concession space, a spa, a sauna, a card room, a recreation room, a gallery, a kitchen and a large guest bedroom. On the third floor, the master bedroom suite will take up an entire wing and consist of a study, sitting room, gallery and four other rooms.

"It's not really one of the hugest houses on the East Coast," said Mike Malfi of The Building Group Inc., the company designing and building the palace, to The Huffington Post. "Of course it is a big house, but it isn't one of the biggest houses." (The chateau is not even half the size of "The East Coast Playboy Mansion," for example.)

Yet it's big enough that a suit has been filed against the The Building Group and the family building the palace, the Yis. Craig Dubow, who collected a $32 million severance package when he resigned as CEO of Gannett Co. last fall, and his wife, Denise, are described by the Post as living in an relatively modest 6,000-some square foot house "adjacent to the planned chateau."

Mafi told The Huffington Post he believes the neighbors' biggest concern is that trees are being cut down to make way for the palace, but that concern should be mollified once he puts in "a lot of trees." A more intractable problem: Mafi said he also thinks that the neighbors are worried their property taxes will go up once the palace is complete.

In any case, Mafi's not worried about the lawsuit. "We're going to go ahead" with the construction, he said. "I'm sure our attorney will work something out."

That attorney might be busy. Mafi said he is also responsible for a 16,000 square foot house being built across the street from the chateau. "They've raised complaints about that one, too," he said.

Another drew a more historical conclusion:

Adding a guillotine would be a nice touch.

Are you looking for a gigantic house in Great Falls? Here are some options for you: 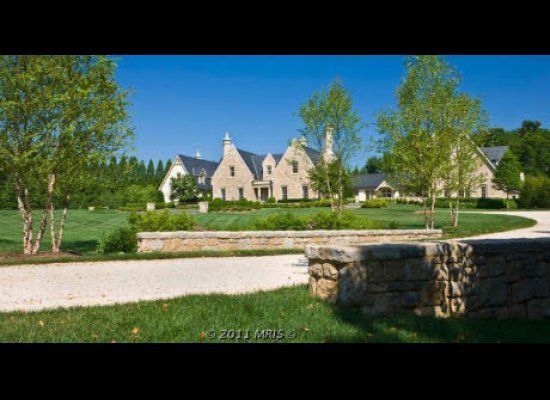