A teen in a dystopian world rebels against the tyrannical government. An average high schooler falls for the mysterious new girl at school. A group of friends takes the road trip of a lifetime. Sound familiar? That’s because the successful world of YA fiction is full of these kinds of characters and stories. In reality, it’s all a bit different.

John Hansen noticed this after comparing his typical day to that of a YA protagonist.

Sometimes I spend all day doing homework and then look at YA characters who save worlds and I'm just like, HOW DO THEY FIND THE TIME???

The 17-year-old YA writer went on to tweet a few alternative plot ideas for the YA universe. His characters might not defeat evil leaders or save the world, but they definitely have their own problems to face.

Extremely realistic YA novel: a girl must battle her way through school on 5 hours of sleep before the villain (exhaustion) destroys her.

John invited other Twitter users to play along, and #VeryRealisticYA was born. In response, the rest of the Internet traded the usual YA plots we know and love for some more practical stories. From dealing with college debt to never having magic powers, this is what it’s actually like being a young adult in the real world today.

Girl politely declines to be the face of the revolution because it's junior year and she has too much homework. #VeryRealisticYA

Girl wakes up one morning with a super ability. She is suddenly able to binge on Netflix, Nutella and tumblr all at once. #VeryRealisticYA

Misfit girl with glasses takes them off and only like 2 people notice and ask if she got contacts or just forgot them. #VeryRealisticYA

Nerdy girl is paired in school project with bad boy. She does all the work and they never speak again. #VeryRealisticYA

A gifted teen's world is blown apart when she realizes just how much student debt she'll have once she's done with college. #VeryRealisticYA

Girl shocked to discover that she is long lost royalty. Mom gently explains, "Honey, that is just your spam folder." #VeryRealisticYA

One fateful summer, one group deep in the woods learns that nothing can overcome the power of friendship. Except bears. #veryrealisticya

Jacob arrested at the Canadian border with his 3-year-old “fiancée” Renesmee. #VeryRealisticYA

Girl moves to NY to be on Broadway. Nobody casts her when she steps off the bus. She even has to go to auditions. #VeryRealisticYA

Four friends try on the same pair of pants. It fits one of them. The last one to try them on rips them. #VeryRealisticYA

Boy gets a letter at age 11. It invites him to take the PSAT #VeryRealisticYA

In a non-post-apocalyptic world, it's up to one teenage girl to do some extracurriculars because colleges like that. #VeryRealisticYA

#VeryRealisticYA Teen finds an old book of spells. Tries one on a dare. It doesn't work. He puts the book back where he found it.

Teens fall in love and can't quote any poetry to each other because they didn't do the readings last year in AP English. #VeryRealisticYA

A young girl plays hide & seek in a wardrobe. Her brother finds her immediately. It's a terrible hiding place. #VeryRealisticYA

Teen accidentally uploads embarrassing video to YouTube. The next school day is normal because it only got 2 views. #VeryRealisticYA 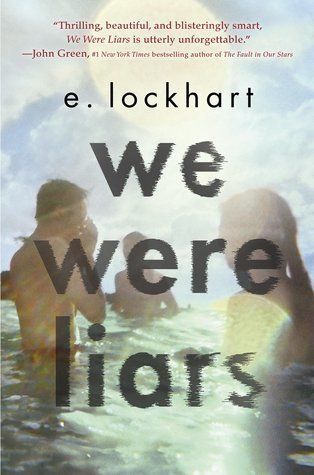 1 / 15
'We Were Liars' by E. Lockhart
E. Lockhart writes about smart kids with secrets in The Disreputable History of Frankie Landau Banks and We Were Liars.