What do you get for the man who has attained perfect enlightenment? That depends on where in the world you are celebrating.

Buddha's birthday, known as Vesak Day (or Wesak), is celebrated on various dates in the spring throughout the world, and each Buddhist culture has its own traditions for the day. It is usually observed during the first full moon in May.

Buddhists celebrate the Buddha's three most important life stages on Vesak: Birth, Enlightenment and Death, which traditionally are said to all have happened on the same day of the calendar throughout his life. The birth story is important because the Buddha was born in Lumbini, Nepal, while his mother stood holding onto a tree. Once born he is said to have taken seven steps forward after which a lotus flower arose from each footstep. He then declared that this was his last rebirth and that he would become an enlightened individual.

In South Korea, followers light lotus lanterns that cover the temples in remembrance of these lotus footsteps. In Sri Lanka, where colorful lanterns are also used, elaborate electric light displays depict different stories from the Buddha's life. In Indonesia, Buddhists light and release lanterns into the air while visiting the Borobudur temple. In Taiwan, followers pour fragrant water over Buddha statues to symbolizing a fresh start in life. In Singapore, devotees set caged birds free on the Buddha's birthday. 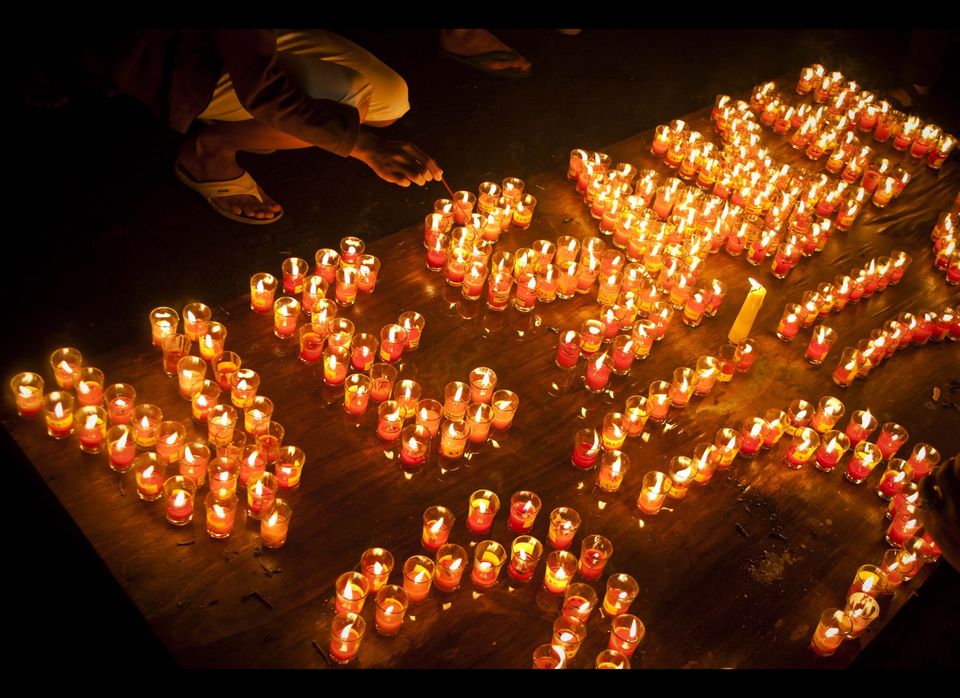 1 / 28
Indonesia
Buddhist followers lighting candles at Borobudur temple during Vesak Day, commonly known as "Buddha's birthday," at the Borobudur Mahayana Buddhist monument on May 6, 2012 in Magelang, Indonesia. Buddhists in Indonesia celebrate Vesak at the Borobudur temple annually, which makes it the most visited tourist attraction in Indonesia. Vesak is observed during the full moon in May or June and the ceremony centers around three Buddhist temples, whereby pilgrims walk from Mendut to Pawon, ending at Borobudur. The stages of life of Buddhism's founder, Gautama Buddha, which are celebrated at Vesak are his birth, enlightenment to Nirvana, and his passing. (Photo by Ulet Ifansasti/Getty Images)
Ulet Ifansasti/Getty Images