NASA's Dawn spacecraft, currently orbiting the massive asteroid Vesta, has sent back stunning images revealing that Vesta is home to a mountain larger than any on earth and among the largest in our solar system, according to Space.com.

The spacecraft, which was launched in 2007, traveled 1.7 billion miles before it reached Vesta's orbit in July. It's equipped with a framing camera and visible and IR mapping spectrometer to image Vesta and, eventually, Ceres, the largest asteroid in the main belt.

The latest findings from the Dawn mission were announced at the EPSC-DPS Joint Meeting 2011, a planetary sciences conference, on Monday in France.

“We are learning many amazing things about Vesta, which we call the smallest terrestrial planet,” Chris Russell, the Dawn Principal Investigator, said in a statement. “Like Earth, Mars, Venus and Mercury, Vesta has ancient basaltic lava flows on the surface and a large iron core. It has tectonic features, troughs, ridges, cliffs, hills and a giant mountain. The south polar mountain is larger than the big island of Hawaii, the largest mountain on Earth, as measured from the ocean floor.”

Russell added that the mountain on Vesta is almost as high as Olympus Mons on Mars, which at 16 miles tall, is the highest mountain in the solar system.

The Associated Press reports that Vesta is 330 miles in diamater and is the second-largest object in the asteroid belt. Newsy cites a CNN report that says that it's the only asteroid that can be seen from earth without the aid of binoculars or a telescope.

It takes 12 hours for the Dawn craft to orbit Vesta, according to Sky & Telescope,

The spacecraft took four years to reach Vesta and will spend a year capturing images of the asteroid, getting as close to 110 miles from the surface. After that, Dawn will travel one billion miles to orbit Ceres.

The craft is powered by ion engines instead of rocket fuel, making the trip more fuel-efficient and allowing it to cruise between the asteroids and lower itself to about 120 miles above the surface to study them in depth.

LOOK: This image, taken from the Dawn spacecraft while 3,200 miles above Vesta on July 24, 2011, shows the difference between the smoother southern hemisphere (lower right) and the crater-filled northern hemisphere (upper left). 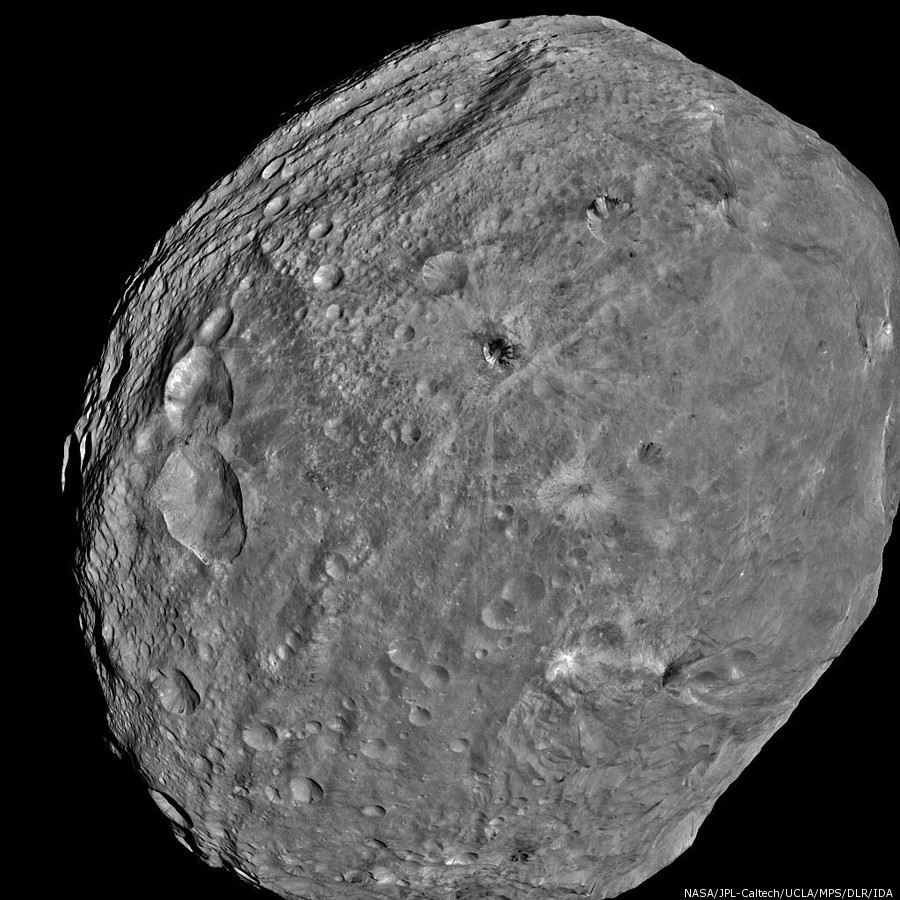