While attending elementary school I started to work after school at a department store near my house in the coastal western town of Mayagüez, Puerto Rico. The store's name was PITUSA, Tienda por Departamentos. At first I thought that Don Delio and Doña Ana Martínez were the store owners. In fact, they were the store managers, a position that they held because they were referred to Israel Koppel (the actual owner of Pitusa Inc.) by other Cubans, who, like them, had migrated to Puerto Rico escaping the Cuban Revolution.

That was my first exposure to the Cuban immigrant community in Puerto Rico - a community that came to dominate retail commerce in many bubbling cities and towns. There, in the middle of downtown Mayagüez, Puerto Rico, the Cuban entrepreneur and professional class tried to rebuild their lives. They quickly adapted to the island and thrived.

Don Delio in particular liked to share his story. He was escaping a revolución that had betrayed him after he initially supported it. Other Cuban store owners and managers shared similar stories. In their accounts, Batista and Castro were two sides of the same coin, equally bad. The Cuban exiled community in Puerto Rico, just like in the US mainland, was not shy about showing their fierce anti-communist feelings which usually came out in long anti-Castro rants. 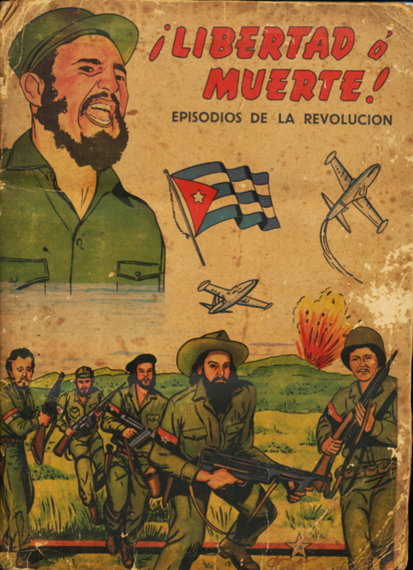 For the most part, unlike Dominican and Haitians, Cubans were in Puerto Rico with documents and they joined the Puerto Rican middle class, and prospered as professionals and entrepreneurs. Just between 1960 and 1980, an estimated half a million Cubans left the island for the United States. Some 30,000 Cubans were admitted to Puerto Rico during the 1960-70s period alone. This Cuban exodus was a consequence of the Cuban Revolution and the policies followed by the United States' government with regard to Cuban immigration.

The Cuban Revolution did not happen in a vacuum. It was in fact one of most important chapters of the Cold War. And the immigration policies of the United States with regard to Cuba reflect how important Cuba was for the United States and the Soviet Union.

The Cold War is a well-known story. As World War II was coming to an end the Great Alliance that defeated Nazi Germany and the Empire of Japan quickly disintegrated and the world became polarized, initially divided between the West and its allies, and the Communist Bloc. Soon the non-aligned movement emerged and came to be known as the Third World.

The Cold War, like most wars, was not about freedom versus tyranny, democracy versus totalitarianism. It was about two super powers trying to export their respective economic systems- capitalism versus Soviet socialism.

The West and the soviet bloc avoided direct confrontation fearing escalation into global conflict and nuclear warfare. Instead they would support whoever fight the other bloc by providing military assistance, training, equipment, and financial support. Most of these Wars by Proxy would be fought in Africa, Asia and of Latin America. The Korean War, Vietnam and Afghanistan are the most prominent examples of the War by Proxy approach followed by the contending superpowers.

An overlooked phase of the Wars by Proxy is Cuba and Puerto Rico. The fate of both islands would be influenced by a propaganda war between the Soviets and the Americans. Making the Cuban revolution fail became an imperative for the Americans after the revolucionarios began to align with the Soviets.

The narratives put forward by President John F. Kennedy's during his presidential campaign made a showdown with the revolutionaries almost inevitable. Attempting to present Eisenhower's administration as weak on Cuba, JFK invoked the much hated Monroe Doctrine (America for the Americans) to explain how he would deal with revolutionary Cuba. He also denounced Eisenhower for allowing the Soviets to edge the Americans regarding missile capabilities, the so-called "missile gap" - in effect, a non-existent threat.

In early January 1961, the U.S.broke diplomatic relations with Cuba after the government expropriated all foreign property in response to American sanctions imposed by the Eisenhower administration.
On April 16, the U.S. landed counter-revolutionaries at Bay of Pigs (Playa Girón) in an attempt to overthrow the revolutionary government. The invasion soon became a fiasco and U.S. military officer's proposed to use U.S. air and naval support to tilt the balance. JFK refused such direct involvement. The invasion failed and actually helped Castro to consolidate his position. A month later Castro announced that Cuba would be a Socialist Republic.

A worse crisis was yet to come. After openly allying with the Soviet Union the Cuban government started to receive massive economic and military aid. During October 14-28, 1962, the world was at the brink of a nuclear confrontation after a U.S. spy plane discovered that the Soviets were building missile sites for nuclear weapons in Cuba. The Cuban Missile Crisis was peacefully resolved after the U.S. agreed not to invade Cuba and to stop its support of counter-revolutionary forces in the country side (los alzados); and the Soviet Union halted the construction of nuclear missile sites in Cuba.

That the Cuban revolutionary government could not be brought down by force did not mean that other means were not to be employed. A way of discrediting the Cuban government was to incentivize Cubans from fleeing the revolution. The Cuban Adjustment Act Statute of 1966 was such incentive. This law allowed Cubans to become permanent residents after being present in the United States for 2 years (reduced to one year in 1976). It set no caps on the number of Cubans to be accepted into the U.S. And, unlike other immigrants, Cubans were not required to enter the United States at a port-of-entry- they could be rescued at sea and would be granted all the benefits of the Cuban Adjustment Act.

Roughly 500,000 Cubans came this way to the U.S. between 1960 and 1980. These policies were in place as a way to continue waging war by other means. It was a way to embarrass the Revolutionary government, to denounce its "tyrannical" rule, to portray the revolution as a failure. For U.S. policy makers Cuba had to fail and Cubans fleeing the revolution were to be welcomed and celebrated.

On the other hand, Puerto Rico had been at the center of international politics for quite some time. It became imperative to find a non-colonial status for the island after WWII especially in view of the U.S. government's involvement (even if mostly by paying lip service) in dismantling the colonial empires of both its enemies and former allies. It is within this context that the Estado Libre Asociado was created- as an alternative decolonization model.

After Cuba became a socialist state, American administrations saw the value of making the island's socio-economic and political projects work and to contrast it to a "failing" Cuba. Puerto Rico was presented as an example of what would happen when you aligned with the U.S. and follow the peaceful path to decolonization. Cuba, on the other hand was presented as a failed state, aligned with an evil empire, unable to feed and clothe its own people, a desperate people ready to brave a treacherous sea to find another live and freedom.

For that matter, when the Puerto Rican economy faltered in the 1970s, the now infamous Section 936 of the U.S. Internal Revenue Code, was extended to the island. It was designed specifically to attract mainland investors to Puerto Rico with companies receiving as much as $70,000 a year in tax write-offs for each job created under Section 936.

But historical processes are not static and the Cold War came to an end, or so it seemed, between 1989 and 1991 as the Soviet Bloc collapsed and the U.S. showed its unparalleled military superiority during the Gulf War. The world briefly became unipolar with the U.S. as the only, and unchallenged, super power.

Most diplomatic historians and the press would mark 1991 as the year when the Cold War ended. However, there was an unsolved chapter, Cuba, and by addition, Puerto Rico.

Puerto Rico and Cuba lost their relevance after the collapse of the Soviet bloc. Cuba was expected to fail after losing the Soviet's support. Hence, enticing Cubans to flee the island was no longer important. In 1995, the Clinton administration revised the Cuban Adjustment Act of 1966 and started to follow a "Wet Foot, Dry Foot Policy." The U.S. stopped admitting Cubans intercepted in U.S. waters. Instead, they would be sent to Cuba or to a third country. Only those who made it to land ("dry feet") could stay in the United States and qualify for expedited legal permanent residence and U.S. citizenship.

In Puerto Rico the 936s began to be dismantled in the 1990s as part of a compromise between the Clinton administration and the Republican Party. Neo-liberalism demanded a sacrifice and Puerto Rico fit the bill. The gradual dismantling of the 936s has been identified by several scholars and economists as the beginning of the current debt and humanitarian crisis in Puerto Rico.

Yet, in the 1990s it looked as if Puerto Rico would reinvent itself economically and Cuba would certainly fail. Instead Puerto Rico fell, and has been ignored by Congress, and by the Obama administration until recently. Meanwhile, there has been a fast rapprochement with Cuba which started with the reopening of both countries' embassies and was recently capped with President Obama's visit to Cuba. The Obama administration is committed to ending this chapter of the Cold War.

A question remains, what will happen with Puerto Rico? Will the administration move strongly to solve the debt and humanitarian crisis?

More importantly, will the perennial status question be solved? Will Puerto Rico come center stage in American politics or will it continue to exist as an unfinished chapter of both the post-war decolonization struggles and the Cold War.

I could not be happier for the thaw in Cuban-American relations but Puerto Rico deserves the same. After all, Puerto Rico played along and was instrumental in winning the Cold War. It is time for the U.S. government to return the favor.