NEW YORK -- Sebastian Junger offered a cautionary tale to aspiring journalists about the unprecedented peril of reporting in the field these days and the toll it has taken on a generation of correspondents.

The award-winning journalist and author shared why, after years of reporting on dangerous assignments, he has decided to no longer cover conflict in the wake of the death of his close friend and colleague Tim Hetherington, a photographer and filmmaker who was killed in Libya in 2011.

At the annual gathering of the Overseas Press Club Foundation on Friday where 15 top, young journalists were awarded a series of internships and fellowships in international reporting, OPC Foundation President Bill Holstein said Junger was chosen as the keynote speaker because he was "the perfect choice for these troubled times." 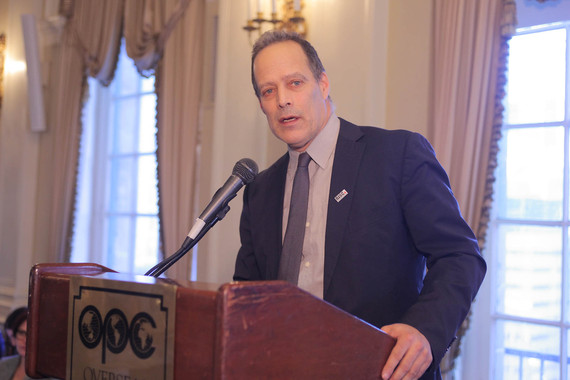 Junger shared his own story and the sense of belonging he found as a young freelancer when he set out at the age of 30 to join the tribe of foreign correspondents. He started in Bosnia, then Africa, and eventually went to Afghanistan in the year before the Sept. 11 attacks.

"I knew this was what I wanted to do," Junger said, referring to "the brothers and sisters" who report in the field as a "family."

But he also spoke of the loss within that family of his close friend Hetherington, a filmmaker who he worked with in Afghanistan on the Oscar-nominated film "Restrepo." Hetherington was killed in Libya when a shrapnel wound caused a femoral artery bleed.

The colleagues with him at the time did not have the basic first aid training that could have saved his life by stopping the bleeding. In response to that tragedy, Junger started the organization Reporters Instructed in Saving Colleagues (RISC) which trains veteran freelance journalists in emergency first aid.

After Hetherington's death, Junger said he decided to no longer cover conflict. And he is among a group that has now taken to cautioning a new generation of reporters -- particularly freelancers -- about conflict reporting at a time of unprecedented and rising peril. There are other important stories in the world that need to be covered, he said.

"War is dramatic, and so in some ways it is very easy to write about it. At 53 years old, I am realizing there are very meaningful aspects of life than can be right around the corner from where you live," said Junger.

It is in that spirit of reporting on life outside of conflict that The GroundTruth Project announced our third annual GroundTruth Middle East reporting fellowship supported by The Correspondents Fund.

The fellowship has been offered in past years in the spirit of great foreign correspondents who died on assignment, including the New York Times' Anthony Shadid who died in Syria in 2012 and Marie Colvin of The Sunday Times of London who was killed in Syria a few days later.

This year we are offering the fellowship in the spirit of James Foley, the American freelance reporter who was murdered by the self-described Islamic State in Iraq and Syria in 2014. In this year's call for fellowship applications we are encouraging young journalists to put forward proposals to report on life, education and culture in the region -- themes which too often go unreported amid a focus on conflict coverage.

This idea emerged directly out of my own discussion with Diane Foley at a Feb. 12 gathering at Columbia University's Graduate School of Journalism where we announced "A Call for Global Safety Principles and Practices" for journalists and journalism organizations, which she has strongly supported. Diane Foley said she hoped we might honor her son in a way that is positive and responsible, remembering that Jim was drawn to people, not solely to conflict.

"Jim loved children and he cared so much about education," Diane Foley said.

That was embodied in Jim's public service with Teach for America where he worked in a tough inner-city school system in Phoenix, Arizona. It was a sense of caring particularly about young people that coursed through his reporting and his life. Through this fellowship, we also want to see proposals that might honor another side of Jim, which was his love of fiction and poetry.

He received a master's degree at the University of Massachusetts, Amherst for writing and won a prestigious literary prize for a collection of published fiction.

Jim was always more than a conflict reporter. He had the "true north" of an international correspondent who was just finding his own voice. He came at this profession not purely from the adrenaline rush of covering war, but more deeply from a sense of caring about the people caught in conflict.

We hope the GroundTruth fellowship will provide the opportunity for a young correspondent in the field to take inspiration from Jim's approach.

The fellowship and Junger's cautionary tale land amid a growing effort by the tribe of international correspondents and editors to confront a global attack on journalism through fostering a new culture of safety for correspondents in the field.

The last few weeks have brought great momentum to this effort which is spearheaded by those of us who care about reporting on the ground, and who genuinely want to see the next generation of correspondents have opportunities to do work that matters in underreported corners of the world, and to do it safely. Here are few of the key developments:

*"A Call for Global Safety Principles and Practices" was formally launched on Feb. 12 at Columbia University by representatives of AP, Reuters, Bloomberg, the BBC, the Committee to Protect Journalists, the Frontline Freelance Registry, the James W. Foley Legacy Foundation and The GroundTruth Project. And in the last two weeks, the list of signatories has grown to 40, adding prominent news organizations such as PBS Frontline, PRI The World and the Miami Herald as well as new media organizations such as Mashable.

*The GroundTruth Project released an expanded and updated edition of "GroundTruth: A Field Guide for Correspondents" which includes "The Call" for safety standards, a resource guide for freelancers and new essays offering advice to freelancers from two experienced veterans: Reuters investigative reporter David Rohde and GroundTruth Visual Editor Gary Knight.

*The 2015 Freedom of Information Award was awarded by the New England First Amendment Coalition to Jim Foley who, as the organization stated, "relentlessly pursued the truth abroad." It was accepted by his parents Diane and John Foley who have started the James W. Foley Legacy Foundation and have been working to highlight the need for the US government to have a more coordinated and effective policy of dealing with American families experiencing the ordeal of being held hostage abroad.

At the OPC event, the 15 young journalists who were awarded internships and fellowships -- including Tusha Mittal and Jenny Starrs, who will be joining The GroundTruth Project as fellows -- told their own compelling stories about their commitment to the craft of international reporting. And anyone worried about the contribution this new generation can make to journalism only needed to hear their stories, their love for journalism and their fierce desire to tell important stories in the world.

Timothy Patterson, an Annapolis graduate who served eight years in the US Navy, volunteered for service in Afghanistan. He was awarded an OPC Foundation fellowship in an AP bureau in South America this summer and talked about being excited to be reporting on new terrain with a new horizon and to be on his first foreign assignment someplace far away from Afghanistan.

Fatima Bhojani, currently at Columbia University's Graduate School of Journalism, was raised in Islamabad, Pakistan and she said she has seen the conflict claim the lives of many people in her family.

She said she wants to report on the tumult caused by terrorism and drone strikes in her own country. But, as she puts it, "These are not abstract concepts, they are forces that shape and have changed my life."

Charles M. Sennott is the Founder and Executive Director of The GroundTruth Project which seeks to train and mentor the next generation of international correspondents. He is on the Board of Governors of the Overseas Press Club Foundation and worked with a core group of colleagues in drafting "A Call for Global Safety Standards and Principles" for freelance journalists.