A Mississippi community has united in support of a beloved physician whose career is in jeopardy.

Dr. Carrol Frazier Landrum, a World War II veteran, had been asked to turn over the medical license he's held for more than 55 years to the Mississippi State Board of Medical Licensure by Jan. 15, the Washington Post reported earlier this month.

The 88-year-old doctor has been using his vehicle as an examination room to see poor patients in and around rural Edwards, Mississippi, for the past two years. Many patients can't afford to pay him, so sometimes he works for free.

"I grew up poor, and when the doctor would come to us, and he was happy to see us, I pictured myself doing that some day," Landrum told the Post. "I try not to ever turn people away -- money or no money -- because that’s where the need is."

According to the state, running a mobile clinic out of a vehicle is unacceptable. But the octogenarian didn't turn in his license, and has no plans to. And thousands near and far -- are fighting back by his side.

An online petition in support of Landrum has garnered more than 54,000 signatures as of Thursday afternoon from supporters around the world -- from Mississippi and California to Belgium and New Zealand.

According to the petition, Landrum serves people who are living in poverty or disabled and cannot travel -- patients that likely wouldn't receive medical treatment if it weren't for him.

As Slate reported last October, widespread poverty in Mississippi has in part affected its citizens' health and well-being. The Kaiser Family Foundation reported that the state has the highest poverty rate in the country, at 23 percent, and America's Health Rankings deemed Mississippi the least healthy state in the U.S.

"I love that he's here," Karen Holt, who lives in Edwards, told Mississippi News Now. "He may not cure cancer, but he's cured a lot of people of basic things... There's a lot of poverty in Edwards, and there are many, many people here who do not have transportation to Vicksburg, Clinton, Jackson, and he truly serves a purpose."

The Edwards community hasn't just signed petitions in support of Landrum, though -- they've secured a permanent place for him to practice medicine, should he keep his license. Landrum told the Washington Post that between churches, community members and one contractor, a local office is being built for him to use.

"If they have that much confidence in me," Landrum told the outlet. "I just want to go all out and do my best for them."

The Mississippi Board of Medical Licensure confirmed this week to Fox News that an investigation is still underway regarding Landrum's license, but would not comment further.

Town Rallies Behind Doctor, 88, Who May Lose License For Treating Poor Patients From His Car
Former Marine Coping With PTSD Paddles Mississippi River 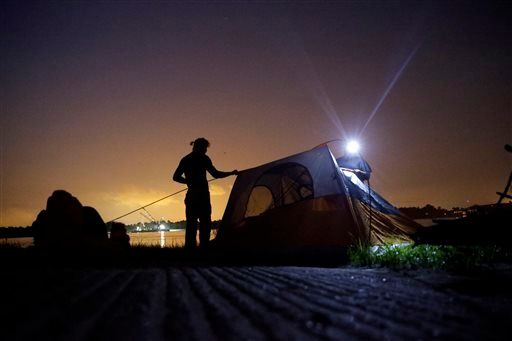 1 / 8
Joshua Ploetz, a Marine vet who has post-traumatic stress disorder, left, and his traveling companion Aleks Nelson, set up camp after nightfall, while canoeing in the Mississippi River in Donaldsonville, La.
AP