A new photo series is casting clichés aside by portraying veterans as nothing but their truest selves.

"The Veteran Vision Project," created by photographer and college student Devin Mitchell, aims to both empower veterans and enlighten the public about the serious issues they face upon returning home. As CBS News reported, sometimes a military uniform "can mask the complexity of the men and women who wear it," and Mitchell is setting out to unveil just who they really are.

"The veteran population is so diverse, and that is one of the elements that is so amazing about the project," Mitchell said in a video posted on Kickstarter. His online fundraiser aims to raise $20,000 to publish a photo book of his work. "If there’s one thing I could accomplish with this project, it would be to give the veterans a voice.”

In the photo illustrations, veterans pose -- sometimes with family members -- in front of a mirror. One photo captures them dressed in uniform and typically sporting a stoic expression. Mitchell takes another photo depicting the military member however they choose to be photographed as a civilian. He then combines the two contrasting images into one. 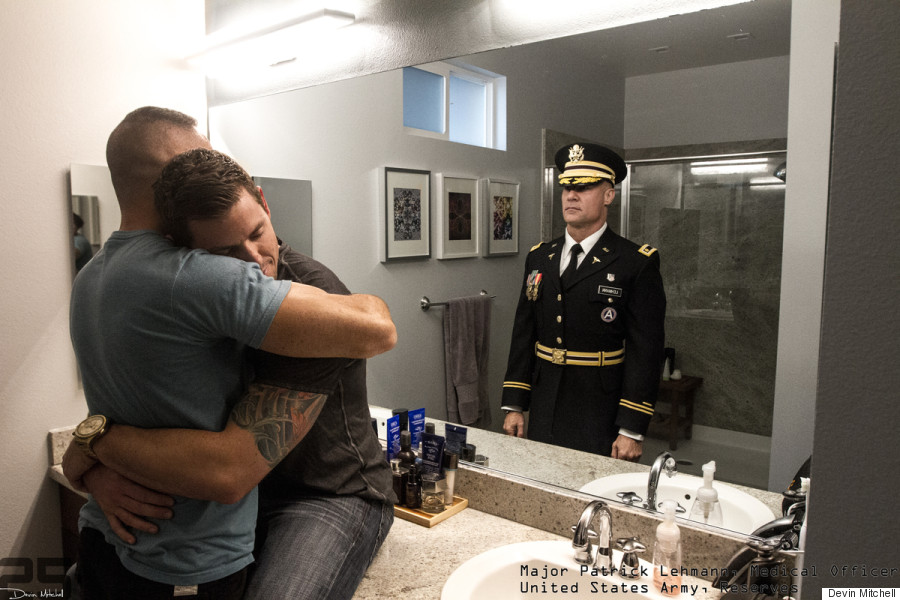 "It’s really giving back to us veterans in allowing us a chance to actually speak out and show who we are," participant Taralyn Goldman, who served in the U.S. Army in Iraq, told ABC 7 News in Los Angeles.

Although several images show carefree men and women in moments of happiness, some reveal the dark realities many military members live with after their service. As CBS reported, some veterans chose to be photographed with items reflecting the pain associated with PTSD -- recreational drugs, alcohol and prescription medications.

"I signed on ... with Devin as just kind of a way to expose the American public to veterans issues," Brad Ivanchan, an injured Marine who participated in the project, said in the Kickstarter video. "Since the wars in Iraq and Afghanistan started, 2.5 million veterans have served in the armed forces and been deployed. This project really helps tell their story after they’ve returned home."

Scroll below to view more of Mitchell's photo illustrations.