It's a cold day with early November snow in the woods as I slog to my writing shack, where I store hundreds of Vietnam-related titles. I'm not sure I need to make the hike. The books jump to mind long before I reach the door. The real problem is, how do I pick out only 13?

My criteria: Books which influenced my thoughts and writing; books which should still receive attention; and books which help to set the record straight or were part of the early record before the distortion.

I read the following books while stationed at Camp Eagle, I Corps, Vietnam in 1970.

This book still serves well for basic understanding of the region and cultures. Wonderful tidbits amid full course meals: Hue, the ancient and revered capital of Vietnam, was founded after European-settled Philadelphia; to 1954 the Vietnamese population of the Central Highlands (The Crown Dominion Lands during French colonial rule) was under 100; Vietnamese do not move there en masse until the great immigration following the communist takeover of the north; a wall was built across Vietnam approximately ten miles north of the DMZ separating the North and South more than 100 years before America became involved.

Hell In A Very Small Place: The Siege of Dien Bien Phu by Bernard Fall

Gems here include the strategy and tactics of PAVN General Vo Nguyen Giap. He used the same mosquito swarm and set piece strategy unsuccessfully during the Tet and mini-Tet Offensives of 1968. (He was operationally marginalized in the wake of those military failures.)

The Information War: How the Government and the Press Manipulate, Censor, and Distort the News by Dale Minor

Great tales on how stories from the field morph as they move upwards through military, government or news channels. My parents sent me this book -- I had gotten myself into a bit of trouble with stories I was writing -- with the inscription, "Seek and ye shall find... at the same time, John, it isn't always wise to tell all you know."

The following, written after the war, hit me as course corrections in a sea of advocacy journalism and activist history (both oxymoron!).

To Bear Any Burden by Al Santoli

Santoli's oral histories (including Everything We Had) lifted this genre to a new standard. He interwove segments of multiple interviews to present powerful and cohesive stories. Well researched and balanced.

A number of the most popular "histories" written by journalists are biased, fraught with omissions, and highly American-centric. Moyar's bold, iconoclastic work stems from years in the LBJ Library and other archives uncovering a much deeper and richer story.

Colby was the Director of the CIA. My copy of this book is heavy with highlights, underlines and margin notes. In January of 1959 the Politburo of the Democratic Republic of Vietnam (the North) declared war upon the South. Early maneuvers included Trail 559 (inception May 1959, aka the Ho Chi Minh Trail) and Route 759, the corresponding sea route, used to infiltrate men and materiel into the South.

A Better War by Louis Sorley

The Abrams years -- after General Creighton Abrams took over for General William Westmoreland, the war drastically changed. Many histories seem to stop at Tet of '68. Americans returning to Viet Nam in 1970 or 1971 barely recognized the war as it was fought in 1967 or 1968. The new nation was blossoming economically, the fighting was mostly restricted to the mountain jungles below the DMZ and along the Laotian border, and South Viet Namese units were carrying the brunt of infantry combat.

Southeast Asian voices: One cannot understand any historical event by examining it from but one side. Let's start with these titles:

As Minister of Justice for the National Liberation Front (VC), Mr. Truong witnessed the machinations of the northern communists, only after 'liberation' to find that he and all southern nationalists had been betrayed.

The Stones Cry Out by Molyda Szymusiak

Don't let the author's name throw you -- she was the 12-year-old daughter of an official in the Lon Nol government when the Khmer Rouge emptied Phnom Penh and began their Year Zero reign of terror. Heart-breaking.

There are so many more. Briefly:

Paco's Story by Larry Heinemann. A novel about the ghosts haunting a veteran's mind.

12, 20 & 5: A Doctor's Year In Vietnam by John A. Parrish, MD. Absolutely shocking memoir of a young doctor serving with the Marines in I Corps. "The only part that really bothered me was the brains under my fingernails."

These last titles hold personal significance for me.

We Were Soldiers Once... And Young by Lt. Gen. Harold G. Moore (Ret) and Joseph Galloway

General Harrison commanded of the 3d Brigade of the 101st Airborne Division (Airmobile) during the battle for Firebase Ripcord and the ensuing action at Khe Ta Laou upon which The 13th Valley is based. Long after the war he travelled back to Viet Nam and interviewed his counterpart, the commander of the NVA's 324B Division.

I promise you, if you read this list, your perceptions will be forever altered. 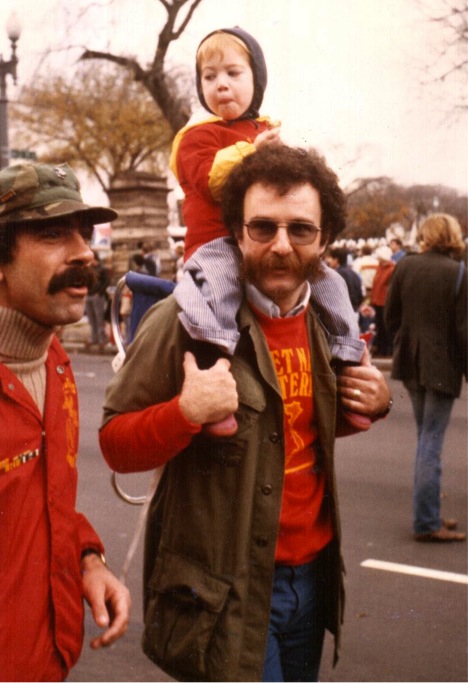 John M. Del Vecchio and son Nate at the dedication of The Vietnam Veterans Memorial Wall in 1982.