Joshua Brandon was searching for peace. In 2009, after three combat tours in Iraq, Brandon had earned a Silver Star and two Bronze Stars with Valor Device, and was finally returning home. He was decorated and distinguished, but in his own words "washed up" as he was learning to survive with PTSD and the after-effects of war. He was not alone. Since 2001, more than two million troops have been deployed to Iraq and Afghanistan. Over half are married and 40% have at least two children. More than a quarter have self-reported depression, compounding the emotional and financial stress on their families. 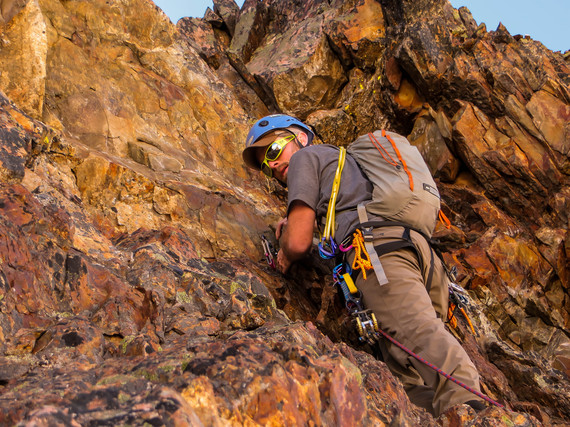 The path forward for returning veterans can be bolstered by treatment, therapy, and medication; but is also too often marked by addiction and suicide. Ultimately, Brandon would find his footing in the same place that his relentless sense of adventure took him as a boy growing up outside Cleveland - the outdoors. "Recreation in nature has had a major impact on myself and on military families and my friends. You go out and you're refreshed. Your senses are cleaned. Your short-term memory resets; you don't remember emails and annoyances. You remember nature; you're in the now. You're in the present."

After summiting Mt. Rainier on an outing with several other veterans, Brandon became addicted to climbing, hooked on aspects that are remarkably similar to those he encountered during combat - camaraderie, adventure, and a dose of adrenaline. Mountaineering is an experience he has since shared with hundreds of other veterans, first as the Military Organizer for the Sierra Club Mission Outdoors Program and now as a leader at a program called Project Rebirth.

Brandon is mindful that outdoor recreation alone is not a substitute for professional treatment, but he is also clear that deep in the backcountry, men and women returning from war are discovering a sense of peace - and empowerment. And for those not ready to take on alpine adventures, nature is also waiting closer to home. Over the last two years, veterans and their families from across the country have come to IslandWood, an outdoor learning center that we direct near Seattle. They visit us to participate in Operation Purple Family Retreats offered by the National Military Family Association (NMFA).

From our field experience, we have known for a long time that outdoor learning programs are a tipping point for children - a springboard to a lifelong love of discovery and commitment to stewardship. Now we are seeing a similar impact on veterans and their families, as do with the kids we serve. And the evidence is not just anecdotal: a 2013 report prepared by the University of Michigan found that veterans who participated in outdoor recreation activities - especially those that involved physical challenge, camaraderie, and achievement - were more likely to report improvements in psychological well being, social functioning, and outlook on life. This is particularly encouraging news for those veterans who feel more comfortable seeking help outdoors than in traditional counseling settings.

At a time when many trends with returning warriors are going the wrong way - alarming rates of depression and suicide, skyrocketing healthcare costs - the idea that an affordable treatment may be instantly available without prescription, side effect, or stigma sounds almost too good to be true.

But it was true for Joshua Brandon. And it is true for thousands of other veterans who are finding solace, hope, peace, and new direction in the outdoors. These nature-based experiences are saving lives. And, Brandon believes they are also helping to save nature itself. "When veterans find the outdoors, they make it their own. They become accidental conservationists who come to see environmental concerns as a national security issue and not just a liberal issue." Time in nature has the power to transform lives, and in many cases to save lives too.

This blog was coauthored by Martin LeBlanc.