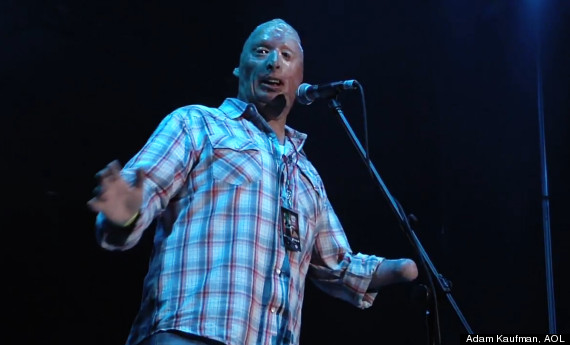 Luana Schneider is not a freeloader.

Bobby Henline isn't dependent on government either, even though he received free medical care after he was catastrophically burned in a bomb blast in Iraq and -- like other severely wounded combat veterans -- received a tax-free $100,000 insurance payout from Uncle Sam.

Few Americans receive as much from government as the combat wounded. Their military medical care, from treatment on the dusty battlefield to the exquisitely meticulous surgery and rehabilitation care, is given on a damn-the-cost basis. The Department of Veterans Affairs insurance program pays out a maximum of $100,000 for severe wounds, in addition to disability payments and other assistance.

Such largesse seems to be precisely the thing that bleeds away Americans' personal responsibility and "fosters government dependency," according to GOP presidential nominee Mitt Romney.

But that view is out of whack with the reality of many of the severely wounded, and other veterans and their families.

Although Romney later asserted that he was not referring to veterans or the military, it seems wildly inaccurate to suggest, as he did in a video recorded at a fundraiser in May, that those who take from the government believe they are "victims" and "take no personal responsibility for their lives" because they pay no income taxes.

True, the 68,000 U.S. troops serving in Afghanistan today pay no taxes on their monthly pay (for officers, combat-zone pay is tax-exempt up to $7,834 per month). Troops at war also pay no taxes on the Family Separation Pay ($250 a month) and Imminent Danger Pay ($225 a month) they receive while in the war zone.

Romney's remarks "made me upset," said Tyler Fultz, 27, who served with the Air Force in Iraq in 2009 and 2010 and now lives in Fort Worth, Texas. "He's dismissing half the population as being dependent on the government and for essentially being lazy. I do not consider myself one of those. I think that when he made those comments he didn't realize the groups of people he was including in that 47 percent and veterans are one of those groups."

The notion that taking government handouts breeds sloth and dependence is belied by Bobby Henline. Like others who have narrowly escaped death, he has attacked his post-war life with energy and zeal, as if not to waste a second. He has struggled to overcome his severe burns, the loss of his left hand and other devastating injuries and has become a stand-up comic, working to raise awareness of burn victims.

"There are some I guess who just sit around," said Henline, the only one of five paratroopers who survived the flaming wreckage after their Humvee hit an IED in Iraq in 2007. Financially, given his disability payments, he could afford not to work for the rest of his life, Henline told The Huffington Post. "But the guys we lost out there, I felt like if I sat around and felt sorry for myself, they would have died in vain. It's important to keep going, for them, for my family.

That same ethic inspires many military families who, despite the support they receive from the government, hardly become craven dependents.

Six years ago, Luana Schneider learned in a phone call that her son Scott Stephenson, a paratrooper, had been blown up in a flaming bomb blast in Iraq and lay dying of massive wounds and extensive burns. Schneider's previous life as an interior decorator and mother of six evaporated. As doctors fought to save her son's life, she became fixed on a single goal: if he lived, she would dedicate her life to his care.

Miraculously, Stephenson lived. Schneider learned to change his dressings, an hours-long ordeal each day. For four years she managed his multiple medications, soothed him through dozens of surgeries. Wiped his bottom. Held him naked in the shower, gently soaping his scarred body.

Six years after he was critically wounded, Stephenson is doing well. He's walking on his prosthetic leg, and coping with Post Traumatic Stress Disorder and Traumatic Brain Injury. He got his $100,000 insurance payment, meant to cover a lifetime of being unemployable. And he gets Social Security and $200 a month in combat disability payments from the VA.

And Schneider remains his primary, full-time caregiver, a role recently recognized by the Department of Veterans Affairs as an actual job. With prodding from Congress, the VA has begun training -- and paying -- caregivers.

In February, Schneider began receiving $1,600 a month from the VA, a salary based on a 40-hour work week which, she says, is ridiculous given that she spends easily twice that time caring for her son.

Does that make her hapless ward of the state? Hardly. "I would fight tooth and nail to the death to make sure my son is covered by the government," she told The Huffington Post. "He cannot function and that is not his fault."

In an interview with The Huffington Post last year, she explained her approach to the Pentagon and the VA this way:

"I am a bitch and that is my child and you owe my child respect. I gave him to the Army in the best physical condition of his life, and they gave him back to me in pieces. You will take care of him or I will know why and I will do something about it and I will be rude."

The VA doesn't disagree that veterans have earned their benefits, even if they don't pay taxes. This year veterans will get $76.3 billion in entitlement payments, including disability compensation and GI bill education assistance -- all tax-free.

More than 8.5 million veterans currently get health care through the VA -- an untaxed benefit -- and 3.5 million vets are receiving untaxed disability payments, according to VA budget documents. The VA is paying to house homeless veterans at a cost of $1.3 billion. Veterans are currently receiving mental health benefits worth $6.2 billion.

"I don't think anyone would consider that wasteful spending or that anyone is leeching off the system," said Paul Rieckhoff, who served in Iraq as an infantry platoon leader before founding the Iraq Afghanistan Veterans of America, a nonpartisan organization to support veterans.

Thanks to the GI bill, for instance, over 700,000 troops who served in Iraq or Afghanistan have gotten tax-free grants to help pay for tuition and books and go back to school, and thousands are entering college this month, he said. Far from creating a culture of relying on government hand-outs, "It's a really good return for the American taxpayers," he said.

"I don't know too many vets who are living in Beverly Hills on their VA benefits."