Around the nation, thousands of veterans and active-duty military personnel are waging their own personal battles against post-traumatic stress disorder. Typically triggered by a horrific incident either witnessed or experienced by the person, PTSD comes with a debilitating set of physical and psychological symptoms.

Many service members are hesitant to seek professional help due to the social stigma surrounding mental illness. Those who do are often dosed with an ever-expanding list of prescription drugs, which, paired with therapy, are frequently the first course of action against certain ailments stemming from PTSD.

"It's a daunting list," Dr. Sue Sisley, a psychiatrist in Phoenix, told The Huffington Post about the staggering number of medications available for PTSD.

The Department of Veterans Affairs' national formulary, a catalog of drugs and supplies commonly prescribed by VA doctors overall, contains more than 1,500 items, ranging from gauze pads to many of the medications listed below. Yet it is not comprehensive. VA doctors can prescribe non-formulary drugs to treat PTSD if they feel that previous treatment regimens have been ineffective or harmful. While these medications have been approved by the Food and Drug Administration, that doesn't mean their specific use as a treatment for PTSD -- and particularly combat-related PTSD -- is fully understood. Doctors often rely on trial and error to figure out what works for an individual patient.

"When I show this list to our military veterans, they were completely nauseated because they have frequently been the target of so many of these medication trials,” Sisley said.

Many of the medications used to treat serious PTSD symptoms such as anxiety, depression, flashbacks and insomnia come with risky side effects, especially when combined with one another. One of the most dangerous is an increase in suicidal thinking.

There is another drug not prescribed by any VA doctor anywhere. Yet some veterans with PTSD say it has helped them tremendously, even reducing their reliance on prescription medications. The drug is marijuana. While it's not entirely harmless, it is known to be far more benign than many potent pharmaceuticals already approved for use.

But the government classifies marijuana as a Schedule I drug with no medical value and explicitly prohibits VA doctors from recommending marijuana to their patients, even in states that have reformed their marijuana laws. Some doctors are now arguing that the federal ban on pot is blocking veterans with PTSD from a valuable treatment option.

During a recent interview on NBC’s "Dateline," U.S. Army veteran Matt Kahl, who served two tours of duty in Afghanistan, said the VA had prescribed a wide assortment of drugs to treat his PTSD. Kahl said the drugs made him feel like a "zombie," and 10 months after returning from duty, he attempted suicide. A short time later he began to self-medicate with marijuana.

Kahl, who now lives in Colorado, the first state to legalize marijuana, told "Dateline" that he was able to eliminate many of those prescription drugs once he began using cannabis.

Roughly 20 percent of military veterans who served in the Iraq and Afghanistan wars suffer from PTSD and depression, according to a 2012 VA report. A study published earlier this year found that the suicide rate among those veterans suffering from PTSD is 50 percent higher than the national average.

Some preliminary research has suggested that marijuana may help alleviate some of the primary symptoms of PTSD, including anxiety, flashbacks and depression.

Dr. Deborah Gilman, a recently retired physician who spent 22 years working for the VA, told HuffPost that she sees significant promise for marijuana as a treatment for PTSD.

"The most common symptoms that vets turn to conventional meds for are sleep problems, nightmares, chronic anxiety, intrusive memories ('flashbacks'), chronic anxiety including social situations and other places, irritability, depressed mood and pain. Pain can be related to combat wounds or not," she said in an email. "In my opinion, all of them could be benefitted to some degree by various properties in marijuana. Marijuana is useful for pain as well as for psychiatric problems."

In an open letter to Congress earlier this year, Gilman urged congressional lawmakers to approve a measure that would give veterans easier access to the plant, both for PTSD and other medical conditions. She argued that marijuana poses a significantly decreased risk of dependence as well as fewer side effects than traditional medications. Cannabis may also be effective at reducing patients’ reliance on narcotic painkillers and, in some cases, may be able to replace them altogether, Gilman said.

Shortly thereafter, the Senate Appropriations Committee approved an amendment to a broader military spending bill that would allow VA doctors to recommend medical marijuana to their patients in states that have already legalized the drug for medical use. While the vote was symbolic -- and in fact the first time the Senate had ever voted positively on marijuana reform legislation -- both the measure and the bill to which it was attached now face a number of hurdles before becoming law.

Not everyone is as enthusiastic as Sisley and Gilman about the potential for marijuana to treat PTSD. Even they aren't touting it as a miracle drug (though Sisley claims to have seen patients replace their psychiatric medications with marijuana alone, arguably a near-miracle). But the doctors can't help but notice that while the VA continues to hand out powerful prescription drugs that don't necessarily help and can harm the patient, marijuana remains a non-starter. Considering the growing anecdotal evidence from veterans who have treated their PTSD with marijuana, they say that's no longer acceptable.

Here's a list of prescription drugs that veterans may be prescribed to treat various PTSD-related symptoms. It's long, but by no means all-inclusive.

Antidepressants interact with the body and brain chemistry in a variety of ways and can treat a number of conditions. For people with PTSD, these drugs are primarily prescribed to combat the effects of major depressive disorder. They are also often prescribed for anxiety disorders and chronic pain.

Depending on which chemical compounds the medications contain, antidepressants can be classified in several categories, including selective serotonin reuptake inhibitors (SSRIs), serotonin-norepinephrine reuptake inhibitors (SNRIs) and tricyclic antidepressants (TCAs). While most of these are considered relatively safe, they have been associated with a range of side effects, such as insomnia, weight gain, loss of sexual drive and, most concerning, an increased risk of suicidal thinking. In 2007, the FDA asked makers of the popular medications to strengthen suicide-related warnings on their labels to include young adults, as well as warnings about the possibility of actually worsening depression.

Antidepressants prescribed for PTSD include: 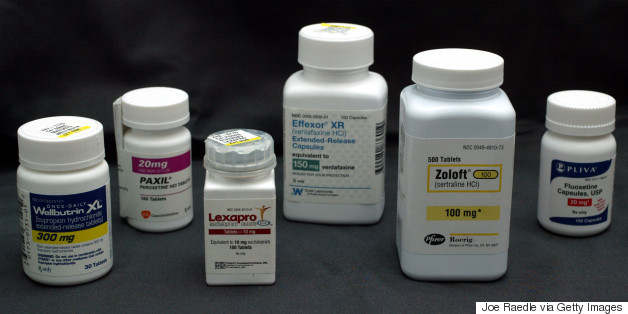 These psychoactive drugs, also called anxiolytics, are designed to treat a range of anxiety disorders experienced by veterans with PTSD. The most commonly prescribed are benzodiazepines, which apart from treating anxiety are also used for their sedative, anticonvulsant and muscle relaxant properties. A 2013 report found that almost one-third of veterans being treated for PTSD were prescribed benzodiazepines, despite VA guidelines advising against their use for the condition.

Regular use of benzodiazepines -- which include such brand-name drugs as Xanax, Klonopin and Restoril -- has been linked to side effects including sexual dysfunction, lost cognition and behavior problems. And studies suggest that chronic users may develop a tolerance, even dependence and addiction. Outside their prescription use, benzodiazepines are recreationally used and abused.

Plus, cessation of benzodiazepine use has been linked to a host of withdrawal symptoms, ranging from comparatively minor issues like insomnia, gastrointestinal problems and spasms, to much more severe symptoms like depersonalization, depression, seizures, psychosis and suicidal behavior.

Anti-anxiety drugs prescribed for PTSD include:

These drugs are used primarily for the treatment of the psychotic symptoms, such as intense nightmares, intrusive thoughts, emotional reactivity and hyperarousal, that some veterans with PTSD may experience. There are two primary types of antipsychotics -- typical (or first-generation) and atypical (or second-generation) -- both of which function by blocking the brain's dopamine receptors. Some atypical antipsychotics have also been prescribed to treat major depressive disorder.

Antipsychotic medications have been linked to a number of side effects, including headaches, dizziness, lethargy and weight gain. More significant complications like tremors and movement disorders -- such as parkinsonism, a syndrome accompanied by debilitating muscular rigidity and loss of mobility, and tardive dyskinesia, a disorder often accompanied by uncontrollable facial tics and other movements -- have been more commonly associated with earlier typical antipsychotics.

In April 2010, AstraZeneca, the maker of Seroquel, agreed to pay $520 million to settle federal claims that it had minimized risks and pitched the medication for off-label uses, including to treat insomnia. The drug was removed from the VA's approved formulary list in 2012 after being linked to a number of questionable deaths and other health concerns. In 2013, however, the Army began evaluating how it could be fit back into approved treatment.

Antipsychotic drugs prescribed for PTSD include:

The term "mood stabilizer" refers to a broad set of psychiatric drugs that includes some atypical antipsychotics as well as the anticonvulsant agents listed below. These drugs are often prescribed for the mood swings or coexistent bipolar spectrum disorders that some veterans with PTSD experience. Doctors may also opt for anticonvulsant mood-stabilizing treatment if antidepressants have proven ineffective for a patient.

Mood stabilizers have been connected to a variety of more minor side effects, including dizziness, weight gain and vomiting, as well as more serious symptoms, such as an increased suicide risk.

Mood stabilizing drugs prescribed for PTSD include the following anticonvulsants, as well as some atypical antipsychotics listed above:

Sedative-hypnotic medications designed to help induce sleep include a variety of drugs listed in previous categories, such as some anxiolytics and particularly benzodiazepines, as well as antipsychotics. There are also other drugs that are prescribed specifically to veterans with PTSD to help with insomnia or other sleeping issues, like nightmares. Among these sleep aids are a newer class of Z-drugs, like Ambien, Lunesta and Sonata, which are largely thought to be safer than benzodiazepines.

Z-drugs and other non-benzodiazepine hypnotics come with their own list of potential side effects, including dizziness, gastrointestinal problems and prolonged drowsiness, as well as less common, though more concerning, effects like parasomnias -- activities like sleepwalking or sleep-eating. Concerns have also been raised that these drugs may be habit-forming.

Sleep aids prescribed for PTSD include the following, as well as a number of drugs listed above: