When I first met public television executive Julie Coan a year ago next week, she and I had a conversation about what it means when a military veterans trusts you enough to listen to their story, and whether any particular response is required. That moment is always sacred, and the quote that comes to mind is theologian Paul Tillich's: "The first duty of love is to listen."

Coan, COO and senior vice president of KLRN, San Antonio's public television station, had just initiated what has become an impressive, multi-year array of programming known as "Veterans' Voices," starting with "Coming Back with Wes Moore" and "Coming Home: San Antonio," followed by Jonathan Wei's "The Telling Project," and the launch this coming weekend of "Never Ending Stories." The goal is primarily to educate the station's civilian audience "so that when veterans come home they won't just disappear back into the community and their lives, but we'll remember what they did for us," says Coan. 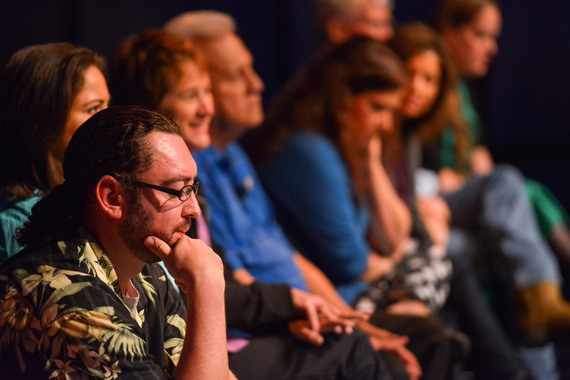 Over the past year, I haven't been able to shake the importance of that word "community" in thinking about veterans, whether it's the bond they have with one another or what sort of impact they can have on society at large.

"Veterans can be a powerful force for healing in the world," writes decorated Army Vietnam veteran Claude Anshin Thomas in his autobiography, At Hell's Gate: A Soldier's Journey from War to Peace, quoting Zen Buddhist leader Thich Nhat Hanh.

Healing happens in community, perhaps, because so does service.

Bessel van der Kolk, M.D. is an internationally recognized trauma healing advocate who recently published The Body Keeps the Score: Brain, Mind and Body in the Healing of Trauma. He writes that "our culture teaches us to focus on personal uniqueness, but at a deeper level we barely exist as individual organisms. Our brains are built to help us function as members of the tribe. We are part of that tribe even when we are by ourselves... Most of our energy is devoted to connecting with others."

Jonathan Wei is a playwright who envisioned the superb series, "The Telling Project," where local veterans in communities across the country share a professionally scripted narrative of their own stories to civilian audiences of family members, friends and strangers. "Service is a core value of veterans," says Wei, adding that it often becomes "the most important part of who they are."

"It's a human compulsion to matter," Wei reflects, and those who don't experience that, whether civilian or military, "lead lives that are much less rich, engaged or satisfying."

While we might commonly understand post-traumatic stress disorder ("PTSD") to have entered the language in 1980 with the publication of DSM-IV, those of us who follow the topic know that a version of PTSD, called by many other names, has been around since soldiers first went to war.

When psychiatrist William Menninger studied combat stress in World War II soldiers, he wrote that a perilous adjustment occurs when a soldier goes "from being an active, aggressive fighter" to a "passive, ineffective 'patient'." "He has surrendered membership in a unit of comrades for a lonely, though physically safer, retreat," wrote Menninger in 1948. "The weariness was gone, true, but so was the companionship of his fellow soldiers."

Phil Klay, a Marine veteran of the Iraq War, won the National Book award last year for his collection of short stories about war and its aftermath, called Redeployment. "War is too strange an experience to process individually," says Klay, while nothing that each of us is involved in the collective war effort, whether we went to fight or stayed behind while others served. Klay proposes that we be interested "first and foremost in veterans as individuals, and not as a category."

Sebastian Junger is the journalist, author and filmmaker behind Restrepo and Korengal, both films about the same unit of Army soldiers at a remote outpost in Afghanistan. This brotherhood that soldiers feel, says Junger, is "an absolute commitment not tied to particular feelings," "an ancient, core human value," and one you "can't do anything dangerous without." "When these soldiers come home," he adds, "that brotherhood is not required" -- and the implication is that many hard-charging veterans feel adrift without it.

When Junger screened Korengal at the Army Residence Community in San Antonio last year, Kevin Rinard, a local Army veteran who'd served in the Korengal valley when Junger was there, echoed what he had to say. "That camaraderie, just knowing that someone is willing to give their life for you, and vice-versa -- it's something that's very difficult to give up when it's time to go home. You can't just snap your fingers and say, 'Okay, that's it; I'm done.' It's in you, it's taken root."

The purpose of storytelling, then, is that it might become a firm and effective bridge across the so-called civilian-military divide. It can also be very therapeutic to those involved.

When I had lunch recently with one of the cast members of "The Telling Project: San Antonio," I asked her about whether the camaraderie displayed on stage during the performances had carried over afterwards; it seemed from social media at least that the relationships formed were both vibrant and continuing. She assured me that in fact the cast members were continued to "heal out loud," willingly supporting each other for better or worse.

"Healing out loud" turns out to be a very apt way to describe the phenomenon of what veterans telling their stories can accomplish: for the veterans themselves, and for the community who does more than listen, but actually hears them. As Phil Klay says, "Storytelling is one of the most vital responsibilities we have." The common thread that runs through Junger's, Wei's and Klay's work, and Coan's comment above - seems finally to be coming together. It would be a powerful thread indeed if veterans could follow it home.